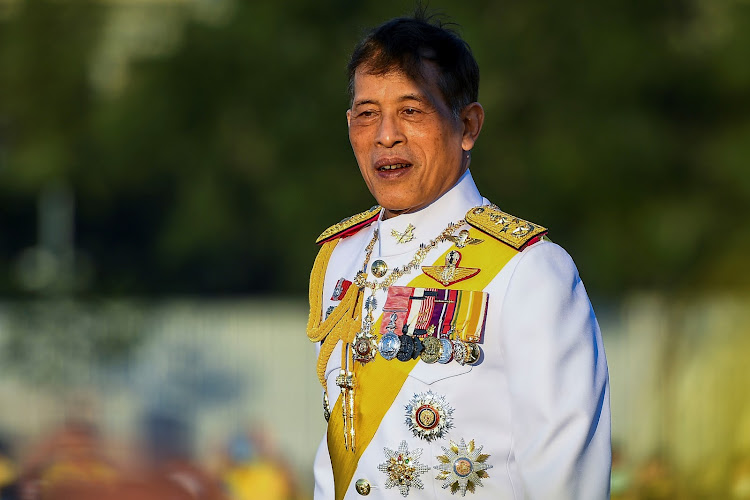 ALL ABROAD Thailand's King Maha Vajiralongkorn spends much of his time in Bavaria, Germany, where his 15-year-old son, Dipangkorn Rasmijoti, goes to school.
Image: REUTERS/Chalinee Thirasupa

An April Fool’s prank tweeted by staff at budget airline Thai VietJet Air could lead to criminal charges, after an activist lawyer filed a complaint with police alleging it had insulted Thailand’s King Maha Vajiralongkorn.

Police will decide later whether to pursue a criminal case under strict lèse-majesté laws — which make defaming the monarchy punishable by up to 15 years in prison — against staff of the airline, an offshoot of Vietnam’s VietJet Aviation .

Thai Vietjet’s official account tweeted on April 1 that the airline was launching a new international route between the Thai province of Nan and Munich in Germany, which stirred online anger and threats of boycotts among ultra-royalists.

The offending tweet was later removed and the airline apologised the next day in a statement saying senior management had not known about the tweet that advertised a “flight route between a province in Thailand and a city in Europe, which led to many public reactions”.

Student-led protests in recent years have seen some activists openly criticising the king for time spent outside the country, among other things. At least 183 people have been charged with insulting the monarchy since the protests began in 2020.

The tweet did not mention King Vajiralongkorn, 69, who has a home in Germany where he spends time with royal noble consort Sineenat Wongvajiraphakdi, who was born in Nan province.

The king granted Sineenat the title of royal consort shortly after his 2019 coronation. He had earlier in the year married a member of his personal bodyguard unit, who became Queen Suthida.

Student-led protests in recent years have seen some activists openly criticising the king for time spent outside the country, among other things. At least 183 people have been charged with insulting the monarchy since the protests began in 2020.

Airline CEO Woranate Laprabang responded to the online royalist outrage by saying the staff responsible had been suspended pending an investigation.

“I would like to apologise to the Thai people once again for such incident,” Woranate said.

But lawyer and activist Srisuwan Janya on Monday filed a police complaint of royal insult and computer crimes, saying in a Facebook post that the tweet “showed intent to offend” and an apology was not enough.

Srisuwan is well-known in Thailand as a prolific filer of complaints with police, once telling the Bangkok Post he had counted over 1,000 filings including for consumer fraud, corruption and environmental issues. Reuters could not determine how many of his complaints have led to prosecutions.

Thailand’s lèse-majesté laws have recently come under criticism by some activists and opposition politicians — a bold move in a country that traditionally upholds the king as semidivine and above criticism.

Just when we thought we were winning, Covid spits out new mutations