Not so Priti: Patel has no time for UK’s pro-Ukrainian warm ...

Not so Priti: Patel has no time for UK’s pro-Ukrainian warm fuzzies

Hardline stance taken by home secretary, a child of refugees, finds her out of step with her party and with the country 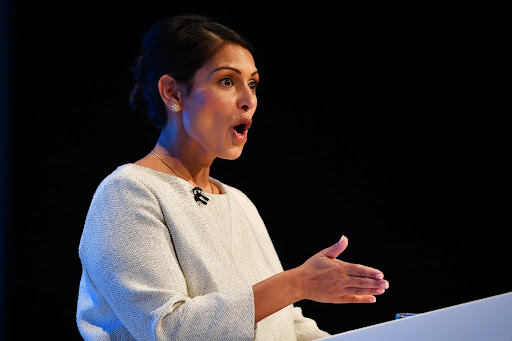 Britain’s hardline home secretary Priti Patel speaks for a chunk of the country that espouses immigrant ambition but not new immigrants.
Image: Bloomberg

In the late 1960s, smelling genocide in the air, Sushil and Anjana Patel fled Uganda for the UK. They thrived in their new country, establishing a chain of news agents in London and Hertfordshire while Idi Amin slaughtered their fellow Gujaratis back home. Today their daughter is the biggest obstacle to Ukrainians seeking refuge in Britain from Vladimir Putin’s merciless war machine.

Priti Patel’s Home Office has almost gone out of its way to make life difficult for Ukrainian asylum seekers, limiting visas to refugees with family members in Britain, demanding fiddly documentation — have you tried uploading your photo onto a form while fleeing invaders? — claiming it had established a visa processing centre in Calais when in fact the nearest one was more than 100km away in Lille. While Germany took in tens of thousands of refugees in the first fortnight after the invasion — and next-door Poland took in more than a million — Britain only managed 4,000. A cartoon on the cover of the normally eurosceptic Spectator magazine summed up the situation: a line of European leaders receives Ukrainian refugees with welcome signs in various languages, while Patel greets them with a long-document labelled “criteria”.

Patel’s foot-dragging attitude to refugees was out of sync with Britain’s can-do attitude to supplying the Ukrainians with weapons and other aid. It was also not in keeping with public opinion. On March 14, Michael Gove, who as minister for housing and communities shares responsibility for immigration policy with the Home Office, shoved Patel’s policies aside and announced a very different way forward. Britain will now take in an “unlimited number” number of Ukrainian refugees for three years provided that householders are willing to sponsor them and put them up in their homes.

Patel is one of nature’s hardliners when it comes to immigration. She has devoted her time as home secretary to two things: introducing a points-based system aimed at reducing the total number of immigrants while giving Britain access to the “best and brightest”; and fending off those who try to make it to Britain through other means. Her determination to clamp down on refugees who try to reach Britain in flimsy rubber dinghies is so fierce that she has considered a number of far-fetched ideas such as using wave machines and water canon to drive them backwards or carting off detained refugees to the Ascension Islands, more than 6,000km away.

Her position on immigration is part and parcel of her attitude on everything that matters. She has worked at various times as a lobbyist for Big Tobacco and Big Alcohol (reading her CV brings to mind Christopher Buckley’s satirical novel Thank You for Smoking). In 1995-97, she left the Tories to work for James Goldsmith’s Referendum Party, which campaigned for a vote on Britain’s membership in the EU, as chief press officer. In 2013, her father was a candidate for the pro-Brexit UK Independence Party in Hertfordshire.

She’s constitutionally incapable of seeing a left-wing shibboleth without giving it a kick. In September 2011, she argued in favour of restoring the death penalty on the BBC’s Any Questions. In November 2017, during delicate Brexit negotiations with the EU, she declared that “I would have told the EU to sod off with their excessive financial demands”. In June 2020, she described the toppling of the statue of a slave-owner, Edward Coulson, in Bristol as “utterly disgraceful”. Asked why refugees wanted to cross the Channel to Britain rather than staying in France, she mused they could be worried France was a “racist” country that might subject them to “torture”.

Why didn’t Patel modify her stance on Ukrainian refugees when it became clear that she was out of line not only with her party but also with the country? And what does the fact that she has lost control of a central part of her portfolio mean for her future as home secretary?

Immigrant voters are increasingly important to the Conservative Party, not just for purely numerical reasons but also because they explode the Labour Party’s accusation that the Tories are the party of white privilege.

The answer to the first question lies mainly in inflexibility. Patel is a bulldozer compared with Gove’s precision machine. During her Any Questions debate on capital punishment she displayed what Conservative Home, a normally sympathetic website, described as a “remarkable imperviousness to argument”. Her personal inflexibility is reinforced by the institutional rigidity of the Home Office, which is much more interested in dotting the i’s and crossing the t’s than it is in producing imaginative solutions to unexpected challenges. In a world of dull-brained behemoths, the Home Office is the most dull-brained and over-sized.

The answer to the second question is more nuanced. Patel has slipped down the greasy poll before. In 2017 Theresa May sacked her from a job as international development secretary because she had unauthorised meetings with Israeli government officials that she had failed to reveal. And she’s certainly lost face as well as power. When you occupy one of the three great offices of state (the other two are the Foreign Office and the Treasury) you don’t expect a colleague from a johnnie-cum-lately department such as Levelling Up, Housing and Communities to steal part of your portfolio. But it would be premature to regard her as either a lame duck or a candidate for demotion.

Patel represents two important (and overlapping) constituencies in her party: the Norman Tebbit tendency (named after the hard-right former MP for Chingford who told the unemployed in the 1980s to “get on their bikes”) and immigrant voters. Patel once said that “if you think I’m right-wing you should look at the average voter”. Many Conservative MPs are much more worried about losing votes to their right than to their left. In the European elections in May 2019, the Brexit Party came first and the Conservatives a dismal fifth.

Immigrant voters are increasingly important to the Conservative Party, not just for purely numerical reasons but also because they explode the Labour Party’s accusation that the Tories are the party of white privilege. In the 2015 election, the Conservatives got more than a million votes from minorities, beating Labour among Hindus and Sikhs by eight points. In 2017, those voters deserted May — Patel’s nemesis — and played a big role in denying the Tories a majority, forcing a coalition with the Democratic Union Party of Northern Ireland. In 2019, they returned to the Conservative fold to give Boris Johnson his huge majority. Patel is an ideal emissary to these voters because she understands their mixture of fierce ambition, socially conservative values and loathing for metropolitan liberals who want to see them as victims. It is at Johnson’s own peril if he alienates a woman who is so in touch with the party’s grassroots — no doubt one reason he downplayed a report into bullying behaviour from the home secretary after numerous allegations.

This means the Tory party is now pointing in two directions on refugees — towards Gove-style generosity when it comes to Ukrainians and Patel-style bureaucratic bamboozling when it comes to everyone else. This will no doubt cause significant problems in the future. Britain’s sudden conversion to generosity towards Ukrainians comes at a time when there are 48,500 asylum seekers, many of them Syrians, who have been waiting for more than six months to have their cases processed. It raises an obvious question: what is the difference between Ukrainians escaping direct Russian terror in Eastern Europe and Syrians escaping Russian-backed terror in the Middle East other than their colour and religion?

But pointing in two directions at once is not necessarily a bad thing in politics. Ronald Reagan liked to joke that his right hand didn’t know what his far right hand was doing; and Johnson has frequently profited from the same selective knowledge. It would be nice to imagine that the current mood of generosity will last for as long as it is needed given the humanitarian catastrophe in Ukraine. And the government is doing its best to cater to the expected surge of refugees by harnessing the goodwill of homeowners.

But moods change and patience wears thin. The refugees will inevitably impose more strains on an already overburdened school system and the National Health Service. Hosts may discover that they have bitten off more than they can chew. Some refugees may be reluctant to go back home if and when the Russians withdraw. Patel’s hardline approach to newcomers may be out of tune with Britain’s attitude at the moment, but that won’t last forever. Another word for “inflexibility” is “consistency”.

Who better to tell us about Jenny Cooper than the woman who gives her life?