Watch out, world: if Canada can rise up against Covid curbs, ...

Watch out, world: if Canada can rise up against Covid curbs, anywhere can

Science or not, if the truckers’ protest there is any guide, countries will face growing pressure to remove restrictions 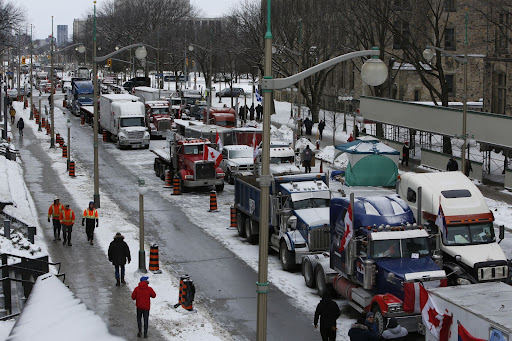 SNOW GO Hundreds of truckers and other protesters have occupied Ottawa’s streets for nearly a week to oppose vaccine mandates.
Image: Bloomberg

Canadians have done as they were told during the pandemic. They lined up for shots until the country had one of the developed world’s best vaccination rates, they endured some of North America’s longest lockdowns and they’ve complied with a wide assortment of curfews and quarantines.

But even in a society known for its civility and deference to authority, many are reaching their limit.

Pent-up frustration and rage have burst into the core of the nation’s capital, with hundreds of truckers and other protesters occupying Ottawa’s streets for nearly a week to oppose vaccine mandates. Protests are expanding across Canada and threatening to spill over into the US, with demonstrators planning a convoy to Washington, DC.

The group in Canada has been championed on Fox News and podcaster Joe Rogan, Tesla billionaire Elon Musk and former US president Donald Trump. Demonstrators have started to build makeshift shelters and collect propane tanks, vowing to stay until vaccine mandates are lifted.

The populace may disapprove of these un-Canadian-like antics, but there is a growing sense of support for a message they’re delivering — that strict Covid-19 restrictions no longer make sense. The protests have been the talk of the nation, around dinner tables, on talk shows and social media. And they serve as a warning not just to Prime Minister Justin Trudeau, but to leaders everywhere: if Canada is starting to resist pandemic measures, what does that mean for the rest of the world?

“People are starting to ask, what is the point or what is the efficacy of these restrictions?” said Shachi Kurl, president of the Angus Reid Institute, a research firm in Vancouver.

A late-January poll by the institute found 54% of Canadians want to end restrictions and let people self-isolate if they’re at risk. That was up 14 percentage points from just a few weeks earlier. Omicron, a variant that’s highly infectious but appears less likely to cause serious illness, has changed the perception of risk, Kurl said.

The reaction is “not knee-jerk. It’s just been building,” she added.

If Canada is any guide, there will likely be growing public pressure to remove restrictions, whether the science supports that or not.

As Covid-19 fatigue turns into angst, weary government leaders must decide whether it’s time to start treating the virus as an endemic disease, like seasonal flu. Experts have warned that might be premature. But if Canada is any guide, there will likely be growing public pressure to remove restrictions, whether the science supports that or not.

In Ottawa, protests saw thousands of people gather in front of Canada’s parliament buildings last weekend. (A separate protest blocked an important border crossing in the west for days.) The numbers dwindled last week, but police expected they would grow again at the weekend and trucker demonstrations were planned in Toronto.

Inside the capital it’s the ongoing presence of hundreds of rigs that has made this a unique event. Though there has been almost no violence or property damage, the trucks lend the demonstrations a menacing air, with the implied threat of heavy machinery in the streets. The city centre is almost entirely blockaded, with trucks spilling into residential areas. Drivers blast deafening hooters all day and, in some cases, deep into the night.

The protests started in reaction to Canadian and US laws that went into effect in January, requiring truckers crossing the border to be fully vaccinated. They have morphed into a fury about Covid-19 restrictions more broadly. Measures to control Omicron hit the economy hard in January, resulting in the country losing 200,100 jobs that month, Statistics Canada said on Friday.

“I’m here because I’ve been segregated from my family,” Cody Ward, a 30-year-old father of three, said while sitting in the car he drove in from Nova Scotia. Parked near the House of Commons, close to an intersection with blocks of flats and a Catholic church, Ward was surrounded by scores of trucks, lined up three lanes across.

He said some extended family members won’t let him into their homes because he’s unvaccinated and he blamed Canada’s politicians for creating a divisive environment. He said he’d arrived in Ottawa on Tuesday and is prepared to demonstrate for weeks, even months.

Eradicating Covid is not realistic and Covid zero is not achievable. Have dinner with your friends. Go to the movies. Go to your kids’ games, most importantly. You should do all of these things without constantly assessing if your every activity is absolutely necessary.

He’s not a trucker, but he’s been taken in by an “Adopt-a-Trucker” programme set up by protest organisers and a local couple is giving him food and shelter. About a third of Canadians support the protest, while 36% think Trudeau should scrap the vaccine mandate for truckers, according to new polling from Innovative Research Group.

More than C$10m (about R120m) was raised for the protesters on a GoFundMe page, but the crowdfunding site shut it down on Friday, citing reports from police of violence and other unlawful activity.

Trudeau, who labelled the trucker convoy a “fringe minority”, has shown no sign of reversing his government’s vaccine mandates. He campaigned and won last year’s election promising to protect healthcare and impose new travel restrictions on the unvaccinated.

Yet the backlash is being felt by political leaders. Conservative leader Erin O’Toole, Trudeau’s primary rival in the 2021 election, was dumped by his caucus last week in a putsch led by lawmakers who disliked the party’s turn to the centre. For some, his refusal to embrace the protesters’ cause was another sign of weakness. After deposing him in a vote on Wednesday, a few went out and posed for pictures with the truckers.

Quebec’s premier backed down on a threat to impose a special tax on unvaccinated residents. The government of Saskatchewan, in the heart of country’s more conservative west, said it will scrap all restrictions soon, including proof-of-vaccination requirements for public places.

“Eradicating Covid is not realistic and Covid zero is not achievable,” Saskatchewan premier Scott Moe said on Thursday, imploring residents to live normal lives. “Have dinner with your friends. Go to the movies. Go to your kids’ games, most importantly. You should do all of these things without constantly assessing if your every activity is absolutely necessary.”