Boris is beginning to look a lot like the Grinch who stole ... 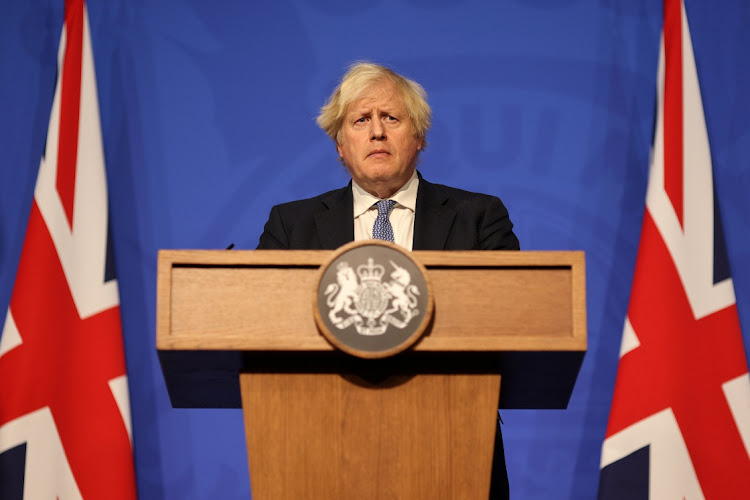 Boris Johnson is again on the back foot over Covid-19, forced by Omicron to impose tougher restrictions, while he struggles to contain the fallout over allegations his staff broke lockdown rules with a Christmas party.

Even after a turbulent few weeks for his government, events on Wednesday were dramatic enough to deepen tensions with members of his ruling Conservatives. First came a humiliating appearance in the House of Commons, where the prime minister apologised after a video emerged showing key aides joking about Downing Street festivities in apparent breach of Covid rules last year.

Hours later, Johnson effectively conceded that his pandemic plan to rely on vaccine boosters, rather than social restrictions, had run out of road against the Omicron strain. With the number of confirmed cases doubling every two to three days, his government opted for its so-called Plan B.

Both are moments of political risk for Johnson. The push back at the new Covid rules was immediate from members of his Conservative Party, one of whom accused Johnson of trying to distract from the fallout over the alleged Christmas party. Before his appearance in parliament, Tory MPs warned the saga is damaging the party’s prospects in a parliamentary election next week.

I can understand how infuriating it must be to think that the people who have been setting the rules have not been following the rules.

“I can understand how infuriating it must be to think that the people who have been setting the rules have not been following the rules,” Johnson told the House of Commons. “I apologise unreservedly for the offence it has caused up and down the country and I apologise for the impression that it gives.”

During testy exchanges in parliament, Johnson was accused by opposition politicians of taking the public for fools over insistence that Covid rules were not broken. Yet it is the mood of his own party that will most concern him.

Johnson’s botched handling of an ethics probe into former Conservative MP Owen Paterson last month, had ignited anger among rank-and-file Tories. Amid days of negative headlines, the party slumped in opinion polls and Johnson’s own popularity fell to the lowest level of his premiership.

Johnson had somewhat righted the ship as his Tories won a special election in the parliamentary seat of Old Bexley and Sidcup last week.

But another backlash started to build when the Daily Mirror newspaper reported that about 40 to 50 people partied at Johnson’s official office at 10 Downing Street “cheek by jowl” on December 18 last year.

Then a video recorded four days after the reported party was aired late Tuesday by ITV News. It shows Johnson’s then press secretary, Allegra Stratton, rehearsing for a TV media briefing and saying there was “definitely no social distancing”, when asked about a party. Stratton resigned in a tearful statement to broadcasters soon after Johnson’s appearance in parliament.

On Wednesday, Johnson’s press secretary denied he attended the event, and there have been no reports that he did so.

The latest saga comes at a critical time, with an election in Paterson’s vacated North Shropshire next week. With tensions already running high, Johnson effectively made them worse with the new Covid restrictions.

“The events of the past few weeks — from the Paterson case to the Christmas party video — have seriously damaged the credibility of those at the very top,” said Mark Harper, who leads a group of lockdown-sceptic Tory MPs in parliament. “Why should people listen to the prime minister’s instructions to follow the rules, when people inside number 10 Downing Street don’t do so?”

Though Plan B — including advising people to work from home and mandating the use of so-called vaccine passports in large venues — falls far short of the lockdowns imposed previously, it still represents a significant change in approach and one that Johnson long sought to avoid.

“It’s become increasingly clear that Omicron is growing much faster than the previous Delta variant,” Johnson said at a televised press conference, calling the new measures “proportionate and responsible”.

The prime minister ruled out following other countries in making coronavirus vaccinations mandatory, though he warned that a “national conversation” may be needed to avoid restrictions in future, if people refuse to get vaccinated.

Speaking alongside Johnson, England chief medical officer, Chris Whitty urged people to look beyond the Downing Street controversy and abide by the new measures to prevent the spread of Omicron.

Still, former business secretary Greg Clark accused the government of “jumping the gun” because Covid-related hospitalisations are not rising, while Tory MP Esther McVey warned of the impact on mental health and the economy.

The CBI, Britain’s biggest business lobby group, called the restrictions a “big setback for businesses” and that firms would need help implementing Covid passports. Michael Kill, CEO of the Night Time Industries Association, said the changes are “devastating” for the nightlife sector.

Bloomberg Economics estimates the move could cost the economy as much as £2bn (R41.7bn) a month.

Johnson will be acutely aware of the risks of imposing new measures, especially before Christmas, after his last-minute reversal last year meant many families had to cancel planned gatherings. He tried to strike an upbeat tone, saying the measures would be reviewed by early January.

Johnson also returned to the topic that dominated his day, saying that while people should work from home, there’s no need to cancel Christmas parties.

As if Covid isn’t enough, now parents have to worry about PIMS