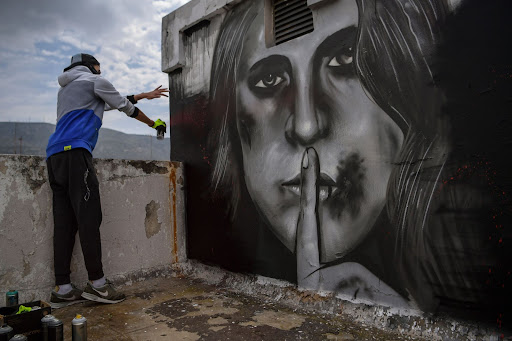 Domestic violence is a scourge that’s causing substantial damage to economies alongside the harrowing consequences it has on its victims.
Image: Bloomberg

Domestic violence is a scourge that’s causing substantial damage to economies alongside the harrowing consequences it has on its victims.

The knock-on effects of abuse are playing out in the workplace as those who endure harm struggle to focus on their careers. Many see their productivity ebb as they grapple with their predicaments. Some are forced to miss work altogether, or are even attacked there too.

With the WHO estimating one in three women experience some form of physical or sexual abuse by an intimate partner or non-partner, the blow to the wider economy is sizeable. The European Institute for Gender Equality believes gender-based violence costs the EU economy 366-billion euros (R6.6-trillion) a year.

A case in point is Tanja, whose name has been changed for her protection. While, for her, the psychological and physical toll of domestic violence is immeasurable, the financial burden it’s placed on her life is all too apparent.

More than two decades ago, she escaped a violent partner who’d abused her for two years. Even now, the 52-year-old German can’t bear the thought of being subject to someone else’s control.

That feeling has kept her out of the kind of jobs she’d been used to earlier on in life, when she had stints as a medical assistant and at an event-management company. She’s now a less well-paid freelance designer, often relying on government benefits to top up her income.

“After my experience with domestic violence, I wanted to make decisions for myself,” she said. “I didn’t want to be an employee somewhere and let someone have power over me.”

Jane Pillinger, an independent gender expert who’s worked with the UN and its International Labour Organisation on domestic violence policy, is all too aware of how abuse can limit people’s chances of achieving better-paid employment.

“That’s a really big issue at a time when we’re putting a lot of emphasis on getting women into jobs and more senior positions and closing the gender pay gap,” she said.

Companies have begun waking up to the problem. Vodafone became the first in 2019 to offer victims 10 days of paid leave; Facebook followed with 20 days from this year.

But a key issue — as Tanja’s case shows — is that attitudes in the workplace are often a deterrent to getting support in the first place.

When she left her abusive partner, several of Tanja’s male colleagues initially took turns driving her to and from work to keep her safe. But no one actually asked how she was doing. Eventually, she says her boss began harassing her, and she had to quit.

Employers could do a lot more to support victims, according to Pillinger, for instance by “giving people the tools to spot the signs to communicate with somebody who’s experiencing domestic abuse”.

“You might not be able to solve the problem,” she said. “But you can open a door to somebody taking the first step to surviving domestic abuse.”

Race is on for new vaccine to combat Omicron