Who was the woman who met such a terrible death? What did the passengers see? And why did it happen? 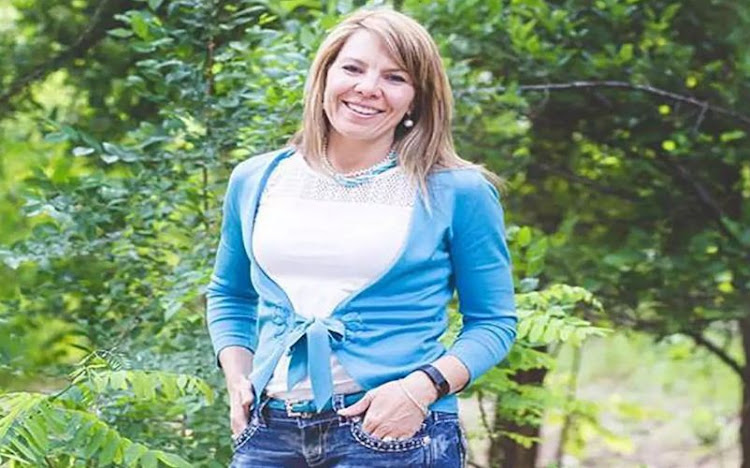 Jennifer Riordan was described as 'an incredible woman'.
Image: Facebook

A banking executive has died after being partially sucked out of a window of a US plane when an engine exploded in mid-air.

Jennifer Riordan, a 43-year-old vice-president at Wells Fargo, was left hanging half outside the Southwest Airlines passenger jet at 9,750 metres.

Passengers scrambled to save the mother of two, who was partly sucked out of the Boeing 737 when the window was smashed by debris. Riordan, who was returning from a business trip, later died and seven others were injured.

The pilot, Tammie Jo Shults, was praised for her cool-headed handling of the emergency and described as having “nerves of steel”.

In an air traffic control recording released by NBC News, the former navy pilot is heard saying: “We have a part of the aircraft missing, so we’re going to need to slow down a bit.”

Asked if the plane is on fire, she says it is not but adds: “They said there is a hole and someone went out.”

Communications between the pilot of Southwest Flight 1380 and Air Traffic Control at Philadelphia International Airport as the plane came in for an emergency landing. https://t.co/KYa1Nw3pYp pic.twitter.com/FxgK35qDqP

Southwest Airlines Flight 1380 was bound for Dallas from New York and had 149 people on board when it went into a rapid descent on Tuesday.

The twin-engine jet made an emergency landing in Philadelphia after a window, wings and fuselage were damaged.

Witnesses reported an engine on the left side of the plane blew, smashing a window and causing cabin depressurisation that nearly sucked the woman out of the aircraft. Riordan was pulled back in by other passengers, but later died.

According to the National Transportation Safety Board (NTSB), the shattered window had showed evidence of “metal fatigue”.

Photos of the plane on the ground showed a missing window and a chunk gone from the left engine, including part of its cover.

A piece of the engine covering was later found in Bernville, Pennsylvania, about 110km west of Philadelphia.

Southwest Airlines confirms accident; our Hearts are with those affected: https://t.co/COJ6wR1GFe pic.twitter.com/Gr1xEN8nhc

Photos posted by passengers showed a heavily damaged window near the damaged engine. Passengers reported seeing a woman being given medical attention on the plane.

Oxygen masks dropped from the ceiling and passengers said their prayers and braced for impact.

And the thoughts that were going through my head of course were about my daughters, just wanting to see them again and give them a big hug so they wouldn’t grow
up without parents.

“And the thoughts that were going through my head of course were about my daughters, just wanting to see them again and give them a big hug so they wouldn’t grow up without parents.”

Bourman said she was seated near the back and was asleep when she heard a loud noise and oxygen masks dropped. She said the plane was fairly quiet because everyone was wearing a mask.

An engine on a Dallas-bound Southwest Airlines flight apparently exploded on April 17 2018, forcing an emergency landing in Philadelphia as one passenger was killed, according to officials.

“Everybody was crying and upset,” she said. “You had a few passengers that were very strong, and they kept yelling to people, you know: ‘It’s OK! We're going to do this!’”

She added that passengers clapped and praised the pilot after the aircraft touched down.

Passenger Marty Martinez went on Facebook live while wearing an oxygen mask. He posted, “Something is wrong with our plane! It appears we are going down! Emergency landing!! Southwest flight from NYC to Dallas!!”

After the plane landed, he posted photos of a broken window near the left engine.

Bourman said she saw emergency workers using a defibrillator to help a woman who was then taken off the plane. She said that she also saw a man rush to cover the broken window and that the man had a bandage around his arm after the plane landed.

Passengers did “some pretty amazing things under some pretty difficult circumstances”, Thiel said.

Shults, the pilot, walked through the aisle and talked to passengers to make sure they were OK after the aircraft touched down.

“She has nerves of steel. That lady, I applaud her,” said Alfred Tumlinson, of Corpus Christi, Texas.

@SouthwestAir These are the hero’s of SWA 1380 NYC to Dallas We lost an engine mid-flight and they guided back to Philly saved 149 on board pic.twitter.com/RNA8sXRBZA

“I’m going to send her a Christmas card, I’m going to tell you that, with a gift certificate for getting me on the ground. She was awesome.”

Tumlinson said a man in a cowboy hat rushed forward a few rows to grab Riordan and pull her back in.

“She was out of the plane. He couldn’t do it by himself, so another gentleman came over and helped to get her back in the plane, and they got her,” he said.

As the plane came in for a landing, everyone started yelling to brace for impact, then clapped after the aircraft touched down safely, Bourman said. 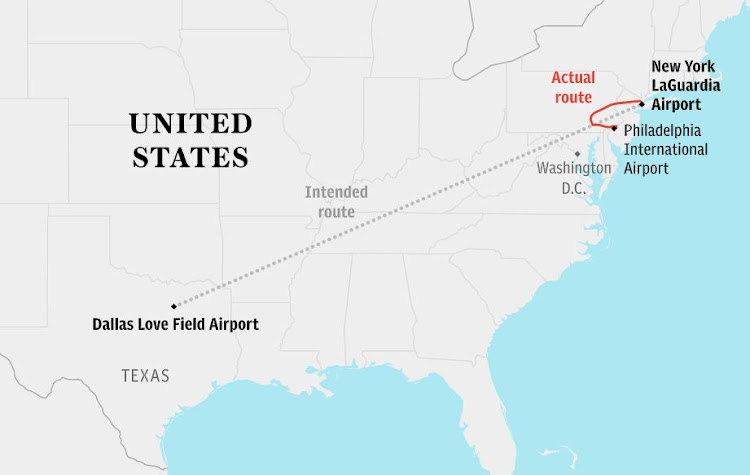 The Federal Aviation Administration said the crew reported damage to one of the engines, the fuselage and at least one window.

The NTSB sent a team of investigators to Philadelphia. The engine will be taken apart and examined to understand what caused the failure.

It is the world’s largest operator of the 737. The 737 is the best-selling jetliner in the world and has a good safety record.

The jet’s CFM56-7B engines were made by CFM International, jointly owned by General Electric and Safran Aircraft Engines of France.

CFM said it sent technical experts to help NTSB investigators. In a statement, it said the CFM56-7B has had “an outstanding safety and reliability record” since its debut in 1997, powering more than 6,700 aricraft worldwide.

John Goglia, a former NTSB member, said investigators will take the engine apart and look at its maintenance records as well.

There’s a ring around the engine that’s meant to contain the engine pieces when this happens. In this case it didn’t. That’s going to be a big focal point for the NTSB – why didn’t [the ring] do its job?

“There’s a ring around the engine that’s meant to contain the engine pieces when this happens,” Goglia said. “In this case it didn’t. That’s going to be a big focal point for the NTSB – why didn’t (the ring) do its job?”

“We’re pushing the engines to produce as much power as possible,” he added. “We’re right on the edge. Sometimes they fail, and that’s why the containment ring is there.”

The engine failure was reminiscent of a similar event on a Southwest Boeing 737-700 jet in August 2016 as it flew from New Orleans to Orlando, Florida.

Shrapnel from the engine left a 12-by-40cm hole just above the wing, and the oxygen masks dropped. The plane landed safely in Pensacola, Florida.

NTSB investigators said one of the engine’s fan blades broke off during the flight, apparently because of metal fatigue.

Family, friends and community leaders are mourning the death of Riordan, who was from Albuquerque, New Mexico.

She was well known in New Mexico, where she had built a career over more than two decades in community relations and communications after graduating. 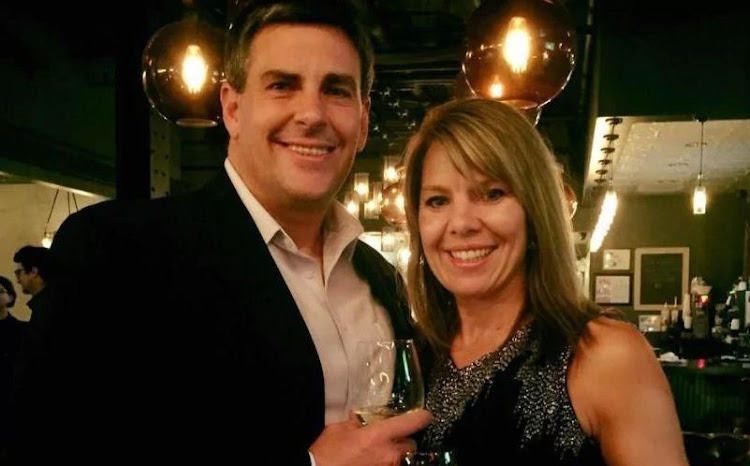 Jennifer Riordan and her husband, Michael Riordan, had been married for more than 20 years.
Image: Facebook

Governor Susana Martinez called Riordan “an incredible woman who put her family and community first” and said her loss would be felt across the state.

“The hearts of all New Mexicans are with the Riordan family,” Martinez, a Republican, said in a statement.

Before starting with Wells Fargo in 2008, Riordan had worked for the University of New Mexico hospital system in public relations and for Citigroup.

At Wells Fargo, she was the vice president for community relations and was in charge of managing employee volunteer and board service to nonprofit groups in New Mexico and parts of Texas.

Mike English, a spokesman for Wells Fargo in New Mexico, said Riordan “was a well-known leader who was loved and respected”. 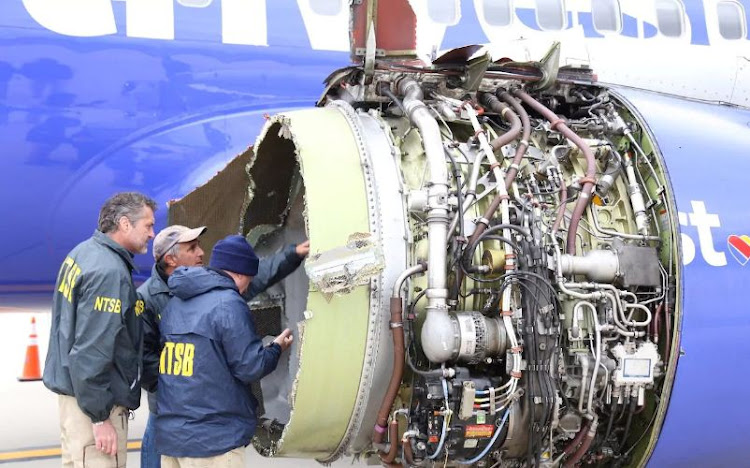 Investigators examine damage to the engine of the Southwest Airlines plane.
Image: Reuters

Albuquerque mayor Tim Keller said his thoughts and prayers were with Riordan's family.

“Today, Albuquerque lost a thoughtful leader who has long been part of the fabric of our community,” Keller, a Democrat, said in a statement.

Keller said Riordan’s leadership and philanthropic efforts “made this a better place every day and she will be terribly missed”.

Members of the broadcast community shared their condolences on social media, remembering the volunteer efforts and outreach spurred by Riordan through her many roles in the community.

What a flight! Made it!! Still here!! #southwest #flight1380 pic.twitter.com/Cx2mqoXVzY

In a tweet, the New Mexico Broadcasters Association expressed its heartbreak over Riordan’s death, noting that she was a former board member and scholarship winner.

Riordan also served on the boards of Junior Achievement of New Mexico, New Mexico First and The Catholic Foundation.

Riordan and her husband, Michael Riordan, a former chief operating officer for Albuquerque, had been married for more than 20 years.

This is for our guys: Pilot blows himself up ...

By The Daily Telegraph
6 min read