A brave boy Queen Elizabeth II, her two children Charles, right, and Ann and a corgi posing at Balmoral in the early 1950s.
Image: AFP

The Queen has reportedly been hit “extremely hard” by the loss of her corgi Willow who died on Sunday – ending the British monarch’s close association with the breed dating back eight decades. 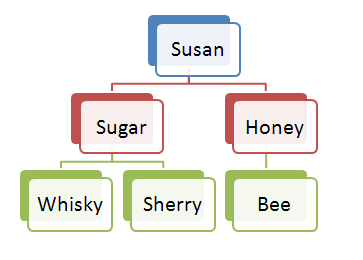 The dog, which was 14th generation and descended from the queen’s first dog Susan, was suffering from a cancer-related illness.

It is understood the queen did not want Willow, who was almost 15, to suffer any further. Insiders said she was hit “extremely hard” by the loss of Willow, who had become her most devoted companion.

Corgis have played a massive role in queen’s life

A Buckingham Palace source said: “She has mourned every one of her corgis over the years, but she has been more upset about Willow’s death than any of them … It is probably because Willow was the last link to her parents and a pastime that goes back to her own childhood. It really does feel like the end of an era.”

The queen has been more upset about Willow’s death than any of them … It is probably because Willow was the last link to her parents and a pastime that goes back to her own childhood.

It was reported that the queen was still feeding and exercising Willow until the weekend, but the dog’s condition worsened.

A vet was then said to have been called on Sunday afternoon, when Prince Philip was able to rejoin her after nearly two weeks in hospital following a hip operation.

The queen still has Vulcan and Candy, two dorgis – corgi-dachshund crosses – but Willow was the only dog left with a link to the queen’s original family of royal corgis.

Last year Her Majesty agreed to adopt a corgi, Whisper, after the death of his owner, a former Sandringham gamekeeper.

As a teenager, the queen fell in love with her father’s dog Dookie, a Pembrokeshire corgi, and wanted one of her own. 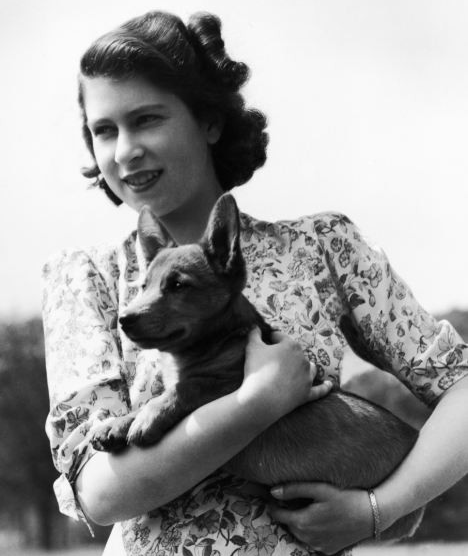 The queen loves her D The queen with her beloved Susan.
Image: Royal Corgis via Twitter

She was subsequently given Susan and during her reign she has owned more than 30 corgis, many of them direct descendants of her first dog.

Susan was so loved that she accompanied the then-Princess Elizabeth and the Duke of Edinburgh on their honeymoon. 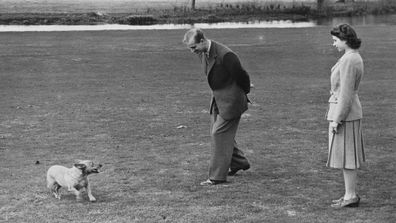 Susan never heard of 'third wheel' Her Majesty and The Duke of Edinburgh on their honeymoon with Susan.
Image: Twitter

Her descendant Willow appeared in the 2012 James Bond sketch which the queen recorded with Daniel Craig for the London Olympics opening ceremony.

The dog and two other corgis, Monty and Holly, greeted the secret agent, played by Daniel Craig, as he arrived at the palace to accept a mission from the queen.

The dogs ran down the stairs, performed tummy rolls and then stood as a helicopter took off for the Olympic stadium, carrying Bond and a stunt double of the queen.

Monty, who was 13, died a couple of months later.

Holly was put down in October 2016 after suffering from an illness, leaving Willow as the queen’s final corgi.

In 2015, the queen decided to stop breeding Pembroke Welsh corgis over fears she might trip over them and hurt herself. It was also reported that she didn’t want to leave any behind when she dies.

Yet during her time looking after them, she has had more than 30 corgis stemming from Susan’s puppies Sugar and Honey, who were born in 1949.

Buckingham Palace declined to comment on the reports, saying it would be a private matter.

Prince Harry knew Meghan Markle was The One because the Queen's Corgis took to her straight away.

The prince said in his engagement interview: “And the corgis took to you straightaway.

“I’ve spent the last 33 years being barked at – this one walks in, absolutely nothing.”

Describing the moment, Markle said: “Just laying on my feet during tea, it was very sweet.”

The queen is synonymous with her love of corgis.

The snappy little dogs had a penchant for nipping servants’ ankles, but the Queen has always been devoted to them.

She has also owned dorgis, black Labradors and cocker spaniels.

Her first corgi, Susan, was given to her as an 18th birthday present by her parents in 1944.

Susan became the founder of the queen’s royal dog dynasty.

But Susan was not always well-behaved. She bit a royal clockwinder on the ankle and was also rather partial to going for servants’ legs.

Her grandson, Whisky, apparently tore the seat out of a Guards officer’s trousers.

The queen has looked after her own dogs as much as possible.

She now has Whisper, the corgi she adopted, and dorgis Vulcan and Candy. 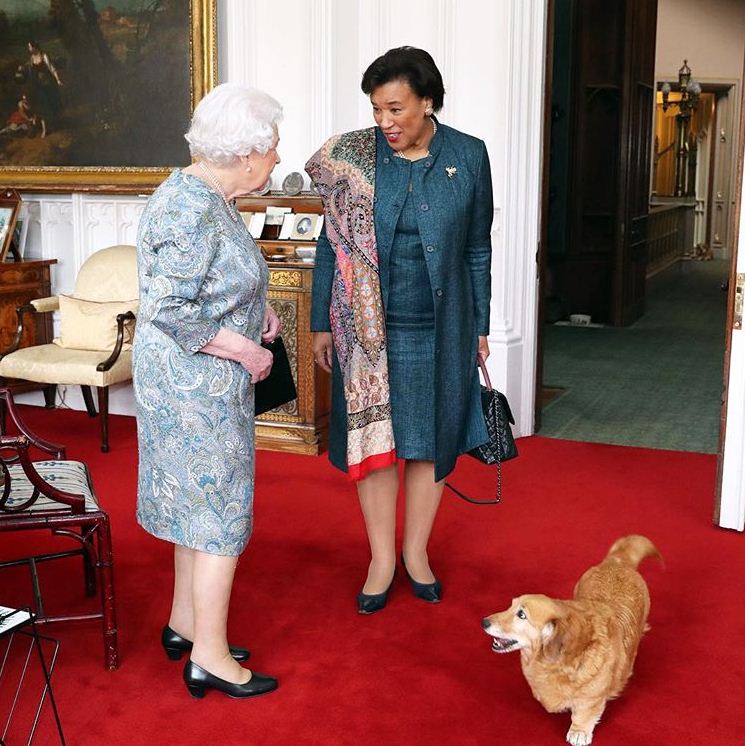 Royal Doggo The queen and her dorgi Candy receive the Commonwealth secretary-general, the Baroness Scotland of Asthal, last week.
Image: theroyalfamily via Instagram

During weekends at Windsor, the corgis went too and lived in her private apartments.

She fed them herself whenever her busy schedule permitted. She mixed their feed with a spoon and fork, from ingredients brought on a tray by a footman.

She also enjoyed walking her corgis and they knew when it was time for their exercise.

If the queen came in wearing a tiara, they laid glumly on the carpet; if she was in a headscarf, they knew it was time for
walkies.

If the queen came in wearing a tiara, they laid glumly on the carpet; if she was in a headscarf, they knew it was time for walkies.

The Duke of York said his mother’s love of her corgis has helped to keep her fit.

“She is just amazing at her age and she walks a long way. The dogs keep her active,” Prince Andrew said.

Corgis are liable to bite people’s legs because their forebears rounded up sheep by snapping at their feet.

One footman at the Palace found a novel way of getting his own back.

He spiked the dogs’ food and water with whisky and gin, then watched in amusement as the tipsy animals staggered around. But he was discovered and demoted.

The Queen celebrates her 90th birthday

At one stage, the queen was forced to call in a dog psychiatrist when her corgis kept setting upon each other.

The worst incident was when Ranger, who belonged to the Queen Mother, killed the queen’s dorgi Chipper in 1989.

Two years later the queen was bitten on the left hand while trying to break up a fight between six of her corgis and two of the Queen Mother’s at Windsor.

She needed three stitches and her chauffeur needed a tetanus jab.

Canine psychiatrist Roger Mugford prescribed an ear-piercing rape alarm which the queen used to break up the dog fights.

He also sent the leader of the pack, Apollo, to live with the Princess Royal.

But sometimes it was the corgis who found themselves under attack.

In 2003, as the royal family was gathering for Christmas at Sandringham in Norfolk, one suffered a tragic fate.

Pharos – then one of the Queen’s oldest corgis – was savaged by another dog and had to be put down.

Queen Elizabeth uses one of her secret tricks for getting out of awkward situations, known in the family as the ‘dog mechanism’.

The queen was devastated at the death of one of her favourite pets.

Dottie, an English bull terrier owned by the Princess Royal, was blamed. The year before, Anne had been fined £500 when the same dog attacked two children in Windsor Great Park.

But some days later, an announcement from the Palace revealed it was a case of mistaken identity. The real killer of Pharos was Florence, another of Anne’s dogs.

Pharos was buried in the Sandringham grounds, joining Susan and some of the other corgis with gravestones there.

I do, I DO! Second weddings are now bigger than ...

The queens were out in force at London Fashion ...

It’s definitely not the year of the Pekingese

Rescued from pup-nappers: The dog named Cat is ...

A private jet and grilled salmon: It sure is a ...