Tears on the typewriter: covering the last Currie Cup final in ...

Tears on the typewriter: covering the last Currie Cup final in Kimberley 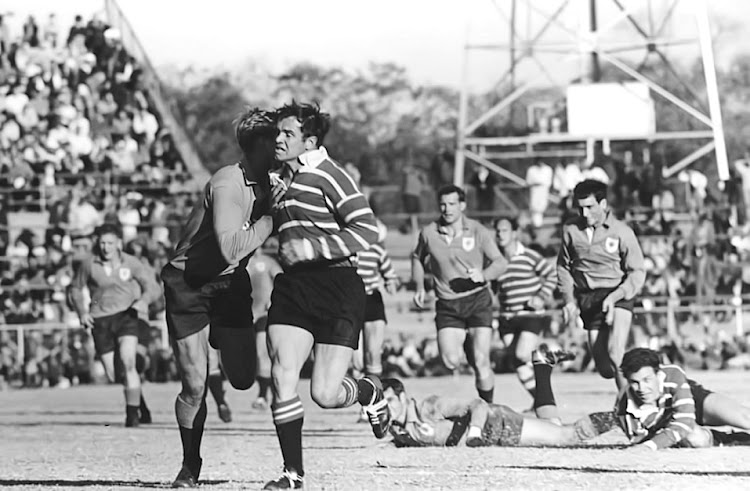 QUICKSILVER Mannetjies Roux on the run for Griqaland West against Northern Transvaal in the Currie Cup final at De Beers Stadium in Kimberley on September 26 1970.
Image: Wessel Oosthuizen/Gallo Images

Mannetjies Roux turned 83 in April and apologises for a memory he says is fading. But there is nothing faulty about his recall of September 26 52 years ago, when he led Griquas to victory over Northern Transvaal in the Currie Cup rugby final in Kimberley — a triumph they said would never be repeated. This Saturday Griquas could prove those sceptics wrong.

Roux, about whom many remain lyrical even now, was carried off the field that day on the shoulders of the Kimberley faithful after an 11-9 win that was as unexpected as it was emphatic. Northern Transvaal, not yet in their Blue Bull guise, had swaggered into the city the day before, all ready to make the next day’s confrontation with the local selection a mere formality. For them it would end in tears, in one case, literally.

The Currie Cup might no longer be what it was in 1970, but don’t tell that to the folk of Kimberley and Nelspruit whose rugby heroes will meet this weekend in the final as Griquas take on the Pumas at a venue that is now called Windhoek Draught Park, formerly Tafel Lager Park, formerly Hoffe Park. A lot of beer has flowed since Griquas’ finest moment in 1970 at a stadium called De Beers that, ironically, had no connection with its current sponsor and more with the city’s history of diamonds.

De Beers Stadium was a ramshackle affair with a press box that resembled a chicken run. On that Saturday in 1970 it was populated by some of the aristocrats of the South African rugby press: the unashamedly partisan Quintus van Rooyen and Neil Steyn, who both saw rugby through a light-blue lens, Sam Mirwis, a marathon runner and a veteran of World War 2, Fred Labuschagne and Michael Shafto, and a youthful pair, Rodney Hartman and Dan Retief, who would stamp their class on the game’s journalism for decades to come. After the match, Steyn would weep, tears falling onto his typewriter keys.

Only six or seven of our players lived in Kimberley. The others lived hundreds of miles away ... Often we only had a chance to practise together the night before a game.

The expectation of a Northerns’ victory was almost unanimous among the scribes. Only one of the party had been callow enough to offer — and in print nogal — a chance to Griquas. He was ridiculed upon his arrival in the press box by Van Rooyen, then reporting for Die Beeld, soon to be amalgamated with Dagbreek en Landstem as Rapport. “Dis die mannetjie wat dink Griekwas kan wen [This is the little bloke who thinks Griquas can win],” he remarked to assembled hacks. When the game was over, the “mannetjie” so scorned would turn and ask: “En wat sê jy nou, Quintus?” Van Rooyen merely ignored the taunt; he had a deadline to meet after all.

The real Mannetjie, meanwhile, was being feted by the faithful. Kimberley had last experienced such joy in 1900 when its siege in the Boer War was lifted.

What is often forgotten today about that alleged mismatch is that the two teams were fairly equal in strength. Though Northerns had eight Springboks to Griquas’ four, the home team’s internationals were of 50-carat quality, especially Roux and flyhalf Piet Visagie, both fresh from their heroics in a series triumph against the All Blacks. Roux’s marshalling of the defence and creation in attack, and Visagie’s line-kicking, to drive the Northerns’ forwards back proved pivotal, but the individual heroes were unsung: a forward who seldom took kicks at goal and an inexperienced wing who had not been first choice in selection.

Roux remembers Buddy Schwarz, then just 21, with as much affection today as he did that Saturday in Kimberley. “I can still see him in my mind’s eye, going over in the corner. Twice!” Schwarz had returned to his hometown after studying on a mine scholarship at the University of Cape Town where he played in the first XV. The Griquas three-quarters, among whom the underrated Koos Waldeck, playing inside Roux at centre, had been outstanding all season, gave Schwarz the space. The little wing provided the speed to touch down twice in almost the same spot in the first half. With Visagie converting one of Schwarz’s tries, it gave Griquas an 8-3 lead at halftime.

In the second half, the inevitable Northerns’ resurgence — and an inevitable try by Frik du Preez — gave them the lead, if only by one point. The outcome hung in the balance until Griquas flanker Peet Smith was given the chance to make or break hearts. A penalty against Northerns was from halfway, and out of Visagie’s range, so Smith stepped up. He nailed it from about 50m. A few minutes later the pandemonium was a massive release of tension for a home crowd that had been on edge for 80 minutes.

It was also a victory for South African platteland rugby where sacrifices were very different from those in the cities. “Only six or seven of our players lived in Kimberley,” Roux recalls, then adds with only a little exaggeration: “The others lived hundreds of miles away”, there being no kilometres in those days. Roux lived 360km (224 miles) from Kimberley on his farm, Nobelfontein, in Victoria West. Others had to drive 200km from Postmasburg where they worked on the Ammosal manganese mine, and yet others 230km from Kuruman.

“Often we only had a chance to practise together the night before a game,” says Roux. “So we had a regular pattern to follow, and everyone fitted into that pattern.”

Even for club matches, players drove vast distances, often on poor Karoo roads. The Victoria West players would not think twice about meeting opponents in, say, Hopetown (234km away) or Prieska (237km). De Aar (166km) was considered “just around the corner”.

Those were still quaint and old-fashioned times in South African rugby, but not quite the “good ol’ days”. In the same city lived a rugby man who would not have been seen dead at the De Beers ground that day. AR “Dullah” Abass was president of the South African Rugby Union at the time. It was a body committed to nonracialism and opposed to the apartheid sports structures, which it defiantly boycotted. His legacy lives on in his hometown, if only just a little. The AR Abass Stadium might have been a venue for a Currie Cup final in the “new” SA, but it isn’t. Thereby rests another story about South African sport.

Archie Henderson is a former sports editor of The Argus, The Times and Arena Holdings group sport.