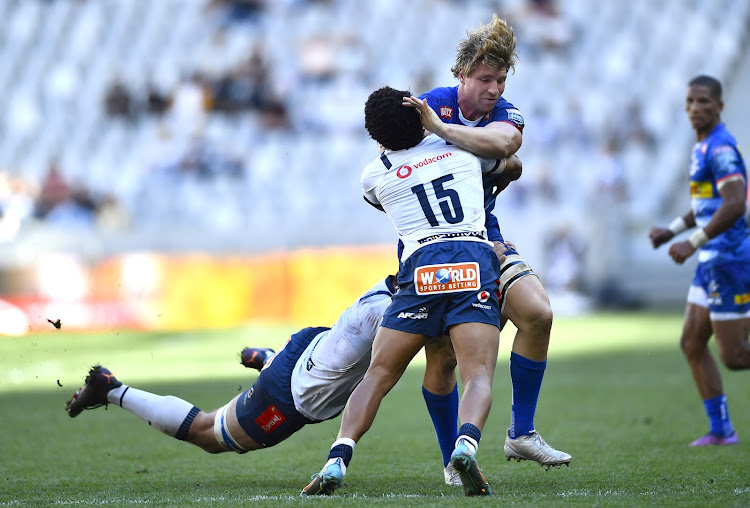 BODY BLOW Stormers No.8 Evan Roos is tackled by his Bulls opposite number, Marcell Coetzee and fullback Kurt-Lee Arendse when the two sides met during the United Rugby Championship round robin stage in Cape Town. The Stormers won that match 19-17.
Image: Ashley Vlotman/Gallo Images

Traditional rivals the Stormers and Bulls will contest a “blood and guts” battle for the United Rugby Championship crown in a surprise final at Cape Town Stadium on Saturday.

South African teams had initially struggled for wins against opponents from Wales, Ireland, Scotland and Italy but have finished the season much the stronger after getting used to northern hemisphere conditions and referees.

The matchup remains SA’s big north-south derby, with the Cape Town-based Stormers and Bulls from Pretoria locking horns in a final that also pits two coaches at opposite ends of the experience spectrum against each other.

The Stormers’ John Dobson is only in his third year at this level, while Jake White from the Bulls won the 2007 Rugby World Cup with the Springboks and has brought vast Super Rugby knowledge to his side this season.

“The Stormers were complete write-offs. Before the competition started, we were 100-1 to win it.”

It doesn’t matter how we start or what happens, we just need to worry that at full-time when the referee blows the whistle, we are a couple of points ahead of them.

Bulls wing Madosh Tambwe is well aware of the challenge for his side, especially after losing both home and away to their opponents in the pool stages.

“The Stormers remain the only South African team we haven’t had a win against (this season),” Tambwe said.

“It doesn’t matter how we start or what happens, we just need to worry that at full-time when the referee blows the whistle, we are a couple of points ahead of them.”

This is the first season the Stormers and Bulls are playing in the northern hemisphere competition.

The Bulls stunned Leinster 27-26 in their semifinal in Dublin, the Irish side having won the competition the previous four years in a row.

The Stormers edged Ulster 17-15 in their home semifinal, scoring a try at the final hooter.

Meanwhile, Springbok coach Jacques Nienaber says facing fit-again Wales back George North will be a challenge for his side as they plot ways to expand their own game with an eye on the defence of their Rugby World Cup title in France next year.

The Springboks face Wales in three home Tests on consecutive Saturdays from July 2, with North set to return after a year on the sidelines with knee ligament damage, which meant he missed the British & Irish Lions series loss in SA last year.

Nienaber believes the powerful wing will add an extra dimension to the Welsh side and his return is a big boost for their coach Wayne Pivac.

“George is a phenomenal player,” Nienaber told reporters on Tuesday. “He is physically strong and has such good attributes. He can play at wing or 13 (outside centre) and has massive experience.

“He has been playing international rugby from 18 years old and that does not happen to a lot of players. That statement alone speaks volumes about him and the quality of the man. It will be a nice challenge for us.”

Nienaber says the Boks, who have been criticised for being too one-dimensional and relying on a dour territorial kicking game, are looking at ways to play differently this year when the situation allows.

“We need to develop our game. We did a proper review of our season (in 2021) and we weren’t perfect at all. There is a lot of growth for us within our team and we are working on various areas to improve.”

But while he has selected eight new caps in a 43-man squad for the entire season, Nienaber said there will be no large-scale experimentation with team selection.

“The Springboks is a performance platform, not for development. You represent your country and a brand that has been there for more than 100 years,” he added.

“If injuries don’t go your way, only then there may be a chance to give some players exposure to international games.”

Blast from the past: A moment of madness as SA bow out of World Cup