Jurie Roux is in a choke tackle, but when will he be released?

Jurie Roux is in a choke tackle, but when will he be released?

Like his predecessors, the Saru CEO is staring at the door, but when will he join them and at what cost? 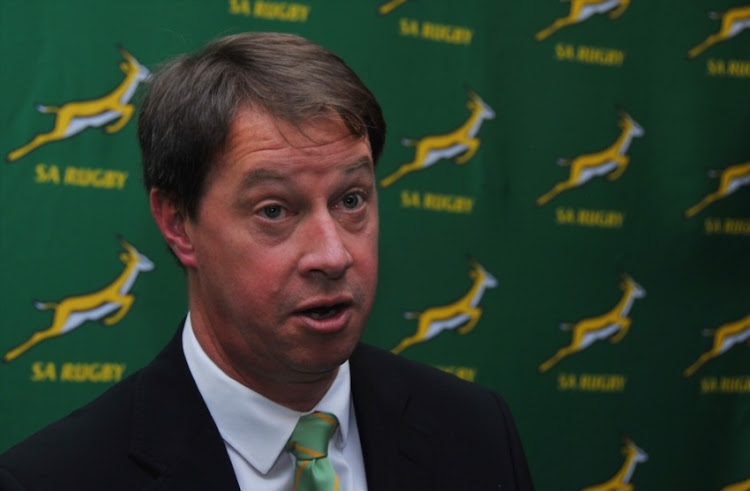 Sport, arts and culture minister Nathi Mthethwa drove many on social media up the pole in the past week or so.

Thankfully there seems to be a climb down from his plan to erect an out-sized flagpole in the name of social cohesion. However, almost lost in the Mthethwa wash this week was the minister breaking his silence on the South African Rugby Union (Saru) and its embattled CEO, Jurie Roux.

Roux is embroiled in a long-running dispute with Stellenbosch University and has been ordered to pay R37m as a result of dubious accounting practices while he was employed by the institution between 2002 and 2010.

“Action must be taken on this particular matter and with urgency,” said Mthethwa, before adding: “I would say this matter is damaging the image of rugby and there’s no doubt about that.”

Mthethwa entering the fray is significant. The state applied a heavy hand in ushering former cricket boss Gerald Majola to the exit after a government inquiry in the wake of Cricket SA’s (CSA) bonus scandal. The issue, which centred on a R4.7m unauthorised bonus payment after the 2009 Indian Premier League (IPL), ended Majola’s tenure as CEO. It stretched from 2002 to 2012.

Some of Roux’s predecessors have also been pointed to the door for far less. Since the game turned pro, Saru has maintained a curious relationship with the men at its helm.

Jonathan Stones became MD of the organisation’s commercial arm early in 2007. He had a strong business background and an affinity for wildlife photography. He went against the prevailing mood and backed a contract extension for Jake White after the Boks won the 2007 RWC. This placed him on a collision course with then president Oregan Hoskins.

Edward Griffiths discovered that being an integral part of a set-up that helped the Springboks win the 1995 Rugby World Cup (RWC) and giving the game wider appeal did not make him impervious to the whims of the game’s establishment.

Much of the RWC afterglow fell on Griffiths, who tried to use the momentum of the tournament to accelerate his transformation ideals. Not everyone was on the same page, however, and by February the next year South African Rugby Football Union (Sarfu) president Louis Luyt had ousted him.

Rian Oberholzer proved a highly competent replacement, even if there were constant reminders of his close links to Luyt, his then father-in-law.

Well after Luyt departed, Oberholzer, who was as strong-willed as his predecessor, ran the show. But the Springboks’ build-up and performances in the 2003 RWC dealt his tenure a terminal blow and it required little for Brian van Rooyen and his supporters to turn the tide and orchestrate a palace revolution.

Johan Prinsloo, the affable former Golden Lions CEO under Luyt, was roped in to help “clean up” HQ under Van Rooyen. His tenure at Saru, which ran from 2004 to 2011 in different positions, was also marked with the occasional bump in the road.

He was accused of sexual harassment by a contract worker, but a formal disciplinary hearing found him not guilty late in 2005. Prinsloo always maintained his innocence, famously saying to Afrikaans daily Beeld: “Daar steek geen waarheid in nie.”

Jonathan Stones became MD of the organisation’s commercial arm early in 2007. He had a strong business background and an affinity for wildlife photography. He went against the prevailing mood and backed a contract extension for Jake White after the Boks won the 2007 RWC. This placed him on a collision course with then president Oregan Hoskins. Stones was also accused of absenteeism and by the time the organisation opted to collapse its commercial division back into Saru, Stones and board chairperson Mpumelelo Tshume, who enthusiastically trumpeted the former’s arrival 20 months earlier, were on their respective bikes.

Roux’s name will eventually be added to this list, but what Saru needs to determine is when and at what cost?

Flogging a Trojan Horse: Putin’s war and the tussle over SA’s energy sector

Theuns du Toit is a product of many things, not least the state