As fight for league titles go down to the wire in England and Italy, in SA there is a battle royal for second place 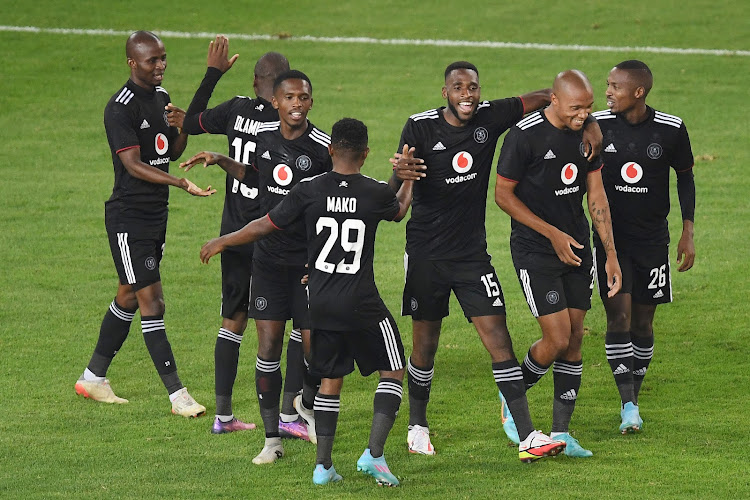 UP FOR THE CUP Orlando Pirates players celebrate a goal during the CAF Confederation Cup match against Royal Leopards at Orlando Stadium in March.
Image: Lefty Shivambu/Gallo Images

We’re coming to an end of another football campaign and while there’s not much excitement on the local front, those following football elsewhere will be absorbed by nail-biting finishes in leagues where exhilarating competition for the championship has been kept alive right to the last round of fixtures this weekend.

In the English Premier League the title could go to either long-time log leaders Manchester City or Liverpool, who need victory against Wolves at Anfield and defeat for their rivals against Aston Villa to win their second league title in three seasons. Only a point separates Man City and Liverpool going to the last round and a loss for Man City and draw for Liverpool will still give Pep Guardiola a fourth league title with City as they have a better goal difference of +6.

In Italy’s Serie A in Italy, the battle between Milan rivals AC and Inter will go down to the wire, with Rossoneri poised to win their first league title in 11 years if they win against Sassuolo away on Sunday. Defending champions Inter trail AC by two points and if they win at home against Sampdoria on Sunday, they stand a chance to defend their title, as long as AC lose to Sassuolo. A draw for AC will still give them the title as they have a superior head-to-head record against Inter.

How I wish we could say the same about the DStv Premiership where we last had such mouth-watering permutations going into the last round of league matches when Kaizer Chiefs lost the title to Mamelodi Sundowns on the last day of the 2019-2020 season.

But not all interest is lost as four teams — Maritzburg United, TS Galaxy, Swallows FC and Baroka FC — will start their last match on Saturday still fighting for their future in the elite league.

The midfield three put a lot of pressure on the ref, especially at home where they rile up the emotions of the crowd. So we’ve got to be calm and not get dragged into these scuffles and emotional moments they try to create.

There’s still a big matter of who finishes second behind Sundowns to qualify for the Caf Champions League, with Cape Town City, Royal AM, Chiefs and Orlando Pirates all vying for that spot. A win for City against their neighbours Stellenbosch FC may assure the Citizens of their Champions League spot alongside Sundowns next season.

But a report on how our campaign panned out will not be complete without mentioning how one of our teams that featured in one of the Caf interclub competitions performed.

That Orlando Pirates will be up against RS Berkane of Morocco in the Caf Confederation Cup final in Nigeria on Friday night is something we can’t ignore. Given their struggles in the domestic league, where they once again failed dismally in their attempt to win their first league title since 2012, the Buccaneers were never expected to go this far in the Confed Cup.

Pirates had a brilliant run in the group stages when they won four, drew one and lost one to finish on top of their group. Bucs’ challenge for the cup gained momentum when they dumped Tanzania’s Simba SC in the last eight, after a penalty shoot-out.

Now Bucs are on the cusp of adding another accolade as victory against Berkane will give them a second trophy on the continent.

Victory against Berkane, the winners of the 2019-2020 Confed Cup, is not going to be easy for the Buccaneers. Pirates face a team which is playing in its third Confed Cup final in four years, after losing to Zamalek of Egypt in the 2019 final, before winning it in 2020 after beating Pyramids also of Egypt.

Pirates’ experience in Caf competitions is something that should help Mandla Ncikazi and Fadlu Davids in the final. Pirates lost in the Caf Champions League final against Al Ahly in 2013 and in the Confed Cup final against Etoile du Sahel of Tunisia in 2015. Those loses should provide Pirates with some knowledge on how to approach and prepare for a game of this magnitude.

As with all Moroccan teams that regularly play in Caf competitions, Berkane hardly give their opponents time to settle or space to breathe. They contest every ball and are not afraid to play dirty, and be the first team to cry foul to the referee.

Pirates will do well to be aware of these little details and I was happy to hear Davids pointing to some of these in the build up to the game. “They’re an experienced team. The midfielders — [Larbi] Naji, [Bakr] El Helali and [Hamza] Regragui — are quite an experienced three,” said Davids of their opponents.

“The midfield three put a lot of pressure on the ref, especially at home where they rile up the emotions of the crowd.

“So we’ve got to be calm and not get dragged into these scuffles and emotional moments they try to create.”

The neutral venue in Uyo, Nigeria, should be a big factor for Bucs as Berkane won’t have the crowd to back them in their frivolous claims for fouls.

For some reason Pirates failed to get out of first gear in their 1-0 loss to Al Ahli Tripoli of Libya in the second leg semifinal at home last week. Such a performance will be punished by Berkane who created 19 chances and had six attempts on target in their 4-1 victory against Zamalek at home in their second leg semifinal tie.

Let’s just hope Pirates players were saving their energy for the final, what with Caf giving them just four days to prepare for it.

Winning the Confed Cup will be good for Pirates fans as they try to forget what has been another disappointing season in the domestic league.

What Bucs fans will be hoping for is that no unnecessary changes are made to the current squad, as they look to once again challenge for the league title next season.

Winning the Confed Cup could also determine Ncikazi and Davids’s future on the Pirates bench.