Chiefs must find a coach they can trust and leave him to do his ... 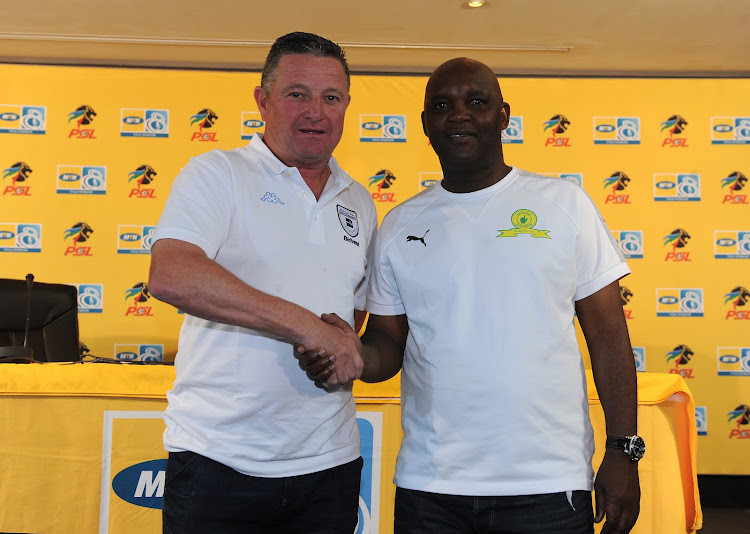 IN CHARGE Gavin Hunt, left and Pitso Mosimane are two of very few coaches in the PSL who were given autonomy over player signings and playing style by their clubs' management. Their success at SuperSport, Wits and Mamelodi Sundowns vindicated this trust.
Image: Gallo Images

I like honesty and transparency because these are the two virtues that can bring relief and hope before any task, mammoth or small, is executed.

I wish we had more transparency and honesty in our football, especially in administration and the way football coaches and professional players are handled by football clubs in SA.

I thought about this when I saw the comments made last week by the man who’ll be taking over as coach of Manchester United next season, Erik ten Hag. The 52-year-old Dutchman didn’t mince his words on why he’s taking the job and the conditions under which he agreed to embark on this journey.

But what was the ultimate key for me are the conditions  Ten Hag laid out to the Man United head honchos before accepting the job. He said he’s the one who's going to make a call on players coming in and those who’ll leave the club once he’s arrived.

“I’m ultimately responsible and accountable for the results. I don’t want to be the sole ruler. I stand for cooperation, but control in transfers is a condition for me,” Ten Hag told the Dutch newspaper Trouw.

But there was another gem that Ten Hag, who stands a chance to deliver a third league title for Ajax Amsterdam before he leaves for United, came up with when he was asked about who he will play and how his Man United will play.

“The material always determines how you play, but I set the requirements that come with it and the standards. I tell who has what task and those who don’t meet it will be told that, regardless of who it is. I make no concessions in that regard.”

Mosimane and Hunt remain the most successful coaches in the PSL era thanks largely to the period they had in these three clubs, where they were given control of almost everything pertaining to technical matters.

How I wish to hear a coach at Kaizer Chiefs, Mamelodi Sundowns or Orlando Pirates talking as confidently as Ten Hag, especially when it comes to the playing material and the one who has a final say regarding signing and releasing players who are deemed surplus to requirements.

In the last 15 years or so we’ve had two coaches in our Premier Soccer League (PSL) who seemed to enjoy a bit of what Ten Hag has put as a condition to lead Man United over the next three years.

When Pitso Mosimane arrived at Mamelodi Sundowns in December 2012, there was a lot of chaos in the dressing room and elsewhere. The team wasn’t performing, despite club boss Patrice Motsepe having the best players the country. And those local Sundowns players were mixed with a number of internationals from all over the continent and beyond, but still the results were terrible.

It didn’t take Mosimane long to mould Sundowns into one of the most feared clubs in SA and the continent. But for that to happen, Sundowns management had to trust Mosimane with handling the players — those signed and those released by the club.

And, as they say, what happened at Sundowns is now history.

Gavin Hunt was another coach who was successful, in his case at SuperSport United and Wits. That happened because the management of both those clubs left Hunt to do his job the way he deemed fit.

I won’t bore you with the number of trophies that both Mosimane and Hunt won but they remain the most successful coaches in the PSL era thanks largely to the period they had in these three clubs, where they were given control of almost everything pertaining to technical matters.

No wonder Mosimane is not afraid to exaggerate his powers sometimes when he talks about Sundowns and the success he had with them.

“I built that club (Sundowns) and I did it alone,” an angry Mosimane wagged his finger to all and sundry after Sundowns beat his current team Al Ahly of Egypt in the group stages of the Caf Champions League in Johannesburg in March.

But let’s put aside Mosimane’s boasting and focus in one particular South African club that needs to give to its coach what Man United have committed to give Ten Hag.

That club is none other Chiefs, the one that fired Stuart Baxter last week partly because the Briton wasn’t delivering the results and playing the material those managing the club thought he should play.

For Chiefs to get some success in the coming years, it’ll have to give its coaches authority to choose the playing material, because as Ten Hag rightfully said, that “determines how you play”.

A new Chiefs coach will invariably arrive and find that he has three different kinds of material to choose his starting XI from. The new man will have the old material that he inherited from his predecessor; one signed by the club before he arrived; and the one he recommended before he starts coaching the team.

If we compare Ten Hag’s standards and conditions under which he takes a new job, you’ll immediately see Chiefs’ downfall. You have a coach who has little control over the playing material and eventually the style of play goes out of the window.

No wonder we saw Baxter playing Cole Alexander and Phathutshedzo Nange, when the management or even Baxter’s assistant Arthur Zwane may have thought Nkosingiphile Ngcobo and Happy Mashiane should play.

You had Baxter insisting on playing Eric Mathoho, when it was clear that Chiefs had signed Njabulo Ngcobo to eventually replace Mathoho in that ageing defence. These frictions and many other side issues, including the way he interacted with the public, led to poor results and Baxter’s sacking.

Chiefs may not be guaranteed results if they give their next coach what Man United will be giving Ten Hag, but the club’s management will at least be excused of the blame if things don’t work out.

I wonder if the Chiefs management is ready to do that if it were to appoint Zwane. Can they leave Zwane to do his job the way he wants as they once allowed the late Ted Dumitru? I doubt it.

I think Chiefs must go out and get a coach it can trust with the players he ships out and those that he signs. As Ten Hag said, the material determines how you play and not the other way round.

I think the desperation of wanting to win trophies at all costs has got in a way of finding the right coach for Chiefs. Seven years have been wasted and I don’t think Chiefs can afford to continue this way if it is hoping for a change in fortunes.

Mosimane and Hunt are the best examples of what can happen at a club here in SA when it trusts a coach. Surely the Chiefs management can see it’s time it changed tack.

Let’s hope it does.

Blast from the past: Great Dane denies Bafana in Copenhagen

Kiwis may miss us, but they can Bok off. We’re better off without them