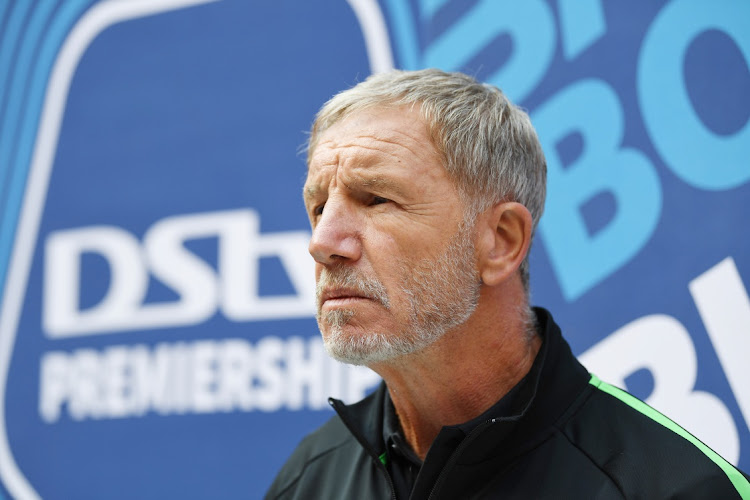 If anybody needed more confirmation of how low Kaizer Chiefs have sunk, I guess they now have it. The once-mighty Amakhosi have become one of those ordinary teams campaigning in SA’s Premier Soccer League (PSL).

Chiefs, a revered football institution, are now in the unfortunate situation of having Stuart Baxter, a coach who thinks using methods that somehow worked for him at the same club almost a decade ago can still produce results today.

You see Baxter is about defending goals first, then planning how best his team can break the opposition’s defence. He’s also a coach who doesn’t worry or care much about the club’s legacy, playing style or philosophy, which may demand it maintains a certain playing pattern, no matter who the coach is.

For Baxter, winning, no matter how disagreeably you play, is the priority. That’s what he was good at in his first stint at Chiefs between 2012 and 2015, when he won two league titles and a couple of domestic cups. Counterattacks and scoring goals through set pieces were the order of the day.

This should explain why Baxter still prefers to see his team mastering a counterattack and punishing the opposition rather than developing a playing style that may give his team greater creativity and variety, while producing results.

In my book, Baxter is a coach who doesn’t want to adapt to new ways and that should tell us why he has so little belief in younger players, reserving much trust for those who are older.

I also don’t believe he listens to his assistants, especially Arthur Zwane, who we know wants a different style of play from his team.

When a particular method doesn’t produce the goods or suit the players, you’d expect a coach as experienced as Baxter to come up with different ways of attacking the opponents. But Baxter has been found wanting far too many times with his penchant for fielding older players when he has enough youth to bring a different dimension, enthusiasm and energy to his team.

He hasn’t done enough to find that role for Ngcobo. What he’s been focusing on is keeping the senior players happy, no matter the results the team gets. When coaches are so afraid of using talented 22-year-olds you begin to wonder at what age someone will be trusted in SA football.

When watching the current Chiefs side I can’t help but cringe. The Chiefs I grew up watching constantly dominated their opponents. The team’s supporters were almost assured of seeing their club getting good results, even in games in which they didn’t have it all their way. I’m sure the late, great, Pule “Ace” Ntsoelengoe has given up turning in his grave trying to figure out what’s happening at his beloved club.

Baxter will prefer playing an old, disciplined Bernard Parker, 36, instead of trusting 22-year-old Nkosingiphile Ngcobo, whose disadvantage, at least in Baxter’s eyes, may be that he doesn’t have Parker’s stamina. Sabelo Radebe, 22, Happy Mashiane, 24, Sibusiso Mabiliso, 22, and Kgaogelo Sekota, 24, are among other younger players whose careers are being held back because Baxter does not trust them. That lack of trust is one of the main reasons Chiefs have been so inconsistent this season.

Ironically, when Baxter was away from the Chiefs bench due to illness, the team played better football and got some good results with Zwane, who placed his trust in Ngcobo and the other young guns. When Baxter came back he lauded Ngcobo, saying it would be difficult to leave him out of his starting XI. But what Baxter has done is completely the opposite, preferring to throw in an attacking midfielder when the going gets tough, like it was on Tuesday night when Chiefs were held to an embarrassing 0-0 league draw against TS Galaxy.

“I think it is a few things,” Baxter said when asked after the game why he’s not starting Ngcobo. “Mshini (Ngcobo’s nickname) always works hard in training. He’s a great lad. The way that we’re playing he’s competing with the players that we look at ... Khama (Billiat), Keagan (Dolly) and Bernard (Parker) ... he’s competing with our senior players. And there are many others to compete with. I’ve struggled, and I’ve said this to the technical staff and I have said it to Mshini.

“I have trouble to really find the best role for him and that isn’t saying he can’t play in the system that we play. But we’ve tried him as a false nine, we’ve tried him on the right, we tried him in the Nedbank Cup game against Galaxy in a sort of pocket in between the midfield and the front players. But I have not got the best out of him yet.

“That’s maybe a little bit of my fault and maybe his fault in adaptation. But that doesn’t mean that I’m giving up on him and I don’t rate him because I take every possibility I can to try and get him some minutes so that he can feel comfortable with whatever role we give him.

“With Mshini it’s work in progress for both of us and I hope we find a role for him that he enjoys and I hope that role will benefit the team.”

I don’t think Baxter really means what he says. He hasn’t done enough to find that role for Ngcobo. What he’s been focusing on is keeping the senior players happy, no matter the results the team gets. When coaches are so afraid of using talented 22-year-olds you begin to wonder at what age someone will be trusted in SA football.

I’ve never seen a successful team, at least in this day and age, which relies solely on counters to get goals. This explains why Chiefs have so struggled with consistency this season — in 22 league matches they’ve not once notched up three consecutive wins.

The team needs to hire a coach who’ll completely change how they play and try to develop a system that produces watchable football, the same way the late Ted Dumitru (1985-1988 and 2003-2005) did in his two stints at the club.

It’s always going to be difficult to change a man’s beliefs and methods, especially at Baxter’s age. But what does the Chiefs hierarchy, which was looking to end a seven-year trophy drought when they brought him back this season, do with him?

For a complete overhaul, development of a playing style and trust in younger players, the club must let go of Baxter at the end of the current campaign.

The team needs to hire a coach who’ll completely change how they play and try to develop a system that produces watchable football, the same way the late Ted Dumitru (1985-1988 and 2003-2005) did in his two stints at the club.

Even Muhsin Ertugral (1999-2003 and 2007-2009), who didn’t win a league title with Chiefs, delivered better football, mainly because he believed in young players.

There was once a great coach from the UK, the late Jeff Butler (1991-1992 and 1995-1996), at Chiefs. He was a brilliant mentor, way ahead of his time and far more innovative. Comparing what he did at Chiefs with what Baxter is doing would be chalk and cheese. Butler believed in young, creative players like Doctor Khumalo. I wonder if Baxter would have played Khumalo at Chiefs if he is struggling to find a slot for Ngcobo.

I’m sure creative players such as the late Isaac Shakes Kungwane and Scara Ngobese, who shone under Dumitru at Chiefs despite challenges with stamina, would not have seen the jersey at Chiefs with Baxter at the helm.

The team has always accommodated expansive players without comprising results, but I don’t think Baxter has time for them or that he believes in their ability.

If I were making decisions at Chiefs I would  consider hiring Zwane and support him with strong technocrats who aren’t afraid to back or criticise his decisions, especially on playing style and using the youth.

For Chiefs to start winning they need to first build a system that every player understands and fits into. Right now I can’t tell how they are playing and that’s the reason an ordinary team like Galaxy can go on to be labelled the hoodoo team. It’s not because they play better football, but rather because Chiefs have been awful, timid, nervous and worse under Baxter.

I’m sure Zwane could do a better job.