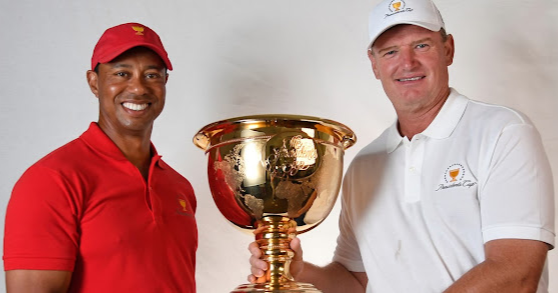 Tiger Woods and Ernie Els, captains of the 2003 US and International teams that shared the 2003 Presidents Cup in 2003.
Image: presidentscup.com

Ernie Els was destined for glory long before he won his first major crown at the US Open in 1994.

He was heralded in a painful but obviously memorable radio advert in which some old codger was bemoaning the youngsters on the course and then he asked his young playing partner his name. The response was: “Ernie, Ernie Els.”

The joke was that the all-knowing old-timer didn’t know everything because he didn’t know who Ernie was.

And Els didn’t disappoint, winning the US Open in 1994 and 1997 and the British Open in 2002 and 2012. Four majors is pretty impressive — it matches Bobby Locke and is second only to Gary Player’s nine — but one always had the sense that Els should have done a little better with his incredible talent.

He twice finished second at the Masters, in 2000 and 2004, and was third twice at the PGA Championship.

Els arguably had the misfortune of playing in the Tiger Woods era, but his two Masters misses were behind Vijay Singh and Phil Mickelson.

The thing about the excitement over Ernie’s prospects is that, at the time, SA golf was waiting for a golfer to fill the void left behind by Player, who won the last of his major titles in 1978, the US Masters.

When Els triumphed at Oakmont Country Club in June 1994, he ended a drought of 16 years for SA golf, and he sparked a resurgence in which little ol’ SA campaigned with great success around the world, punching well above its weight. Those 16 years were the longest gap without a major since Locke won the first of his four British Open crowns in 1949.

And since then it’s been a famine of almost a full decade for SA on the major circuit. This is the longest gap, by far, since the 16 years between Player and Els and it is growing all the time.

Oosthuizen has flown the flag valiantly, finishing in the top three in four of the last five majors. But he just hasn’t been able to duel his way across the finish line.

His British Open victory in 2010 was built on his first two rounds, thanks in part to playing early on the Friday before the weather turned nasty. He opened up a five-shot lead that gave him plenty of breathing room for the last two rounds.

Oosthuizen didn’t have to engage in trench warfare over that weekend as he’s had to in the past couple of years. And in golf there are no silver and bronze medals like there are at the Olympics, which he has steadfastly refused to play in.

The 39-year-old is the oldest of the five South Africans carrying the country’s hopes at golf’s greatest stage, the US Masters, which kicks off at Augusta on Thursday.

There is a feeling that Higgo, the youngest professional in the field, could be the man to pick up the mantle in years to come. Don’t expect him to triumph this time around — Els, at 24, is still the youngest SA golfer to win a major.

But hopefully someone can. This Sunday, when the 2022 champion is crowned, will mark the 61st anniversary of Player’s maiden triumph there and the 11th anniversary of Schwartzel’s victory.

SA is overdue a major victory.

‘It was so intriguing’: Sundowns turn to Danish ice Berg for expertise