Ahly or nothing: no room for error in all-important clash

Ahly or nothing: no room for error in all-important clash

Despite an impressive 1-0 over Ahly in Cairo, Sundowns must not let their guard down on Saturday 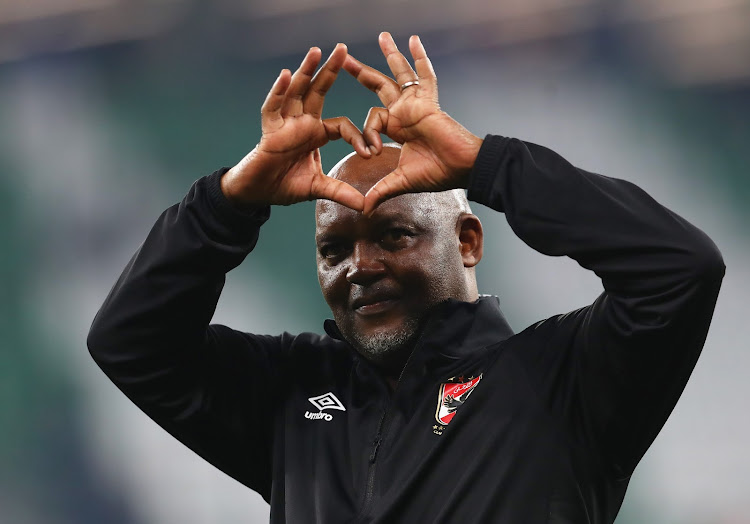 SHOWING THE LOVE Al Ahly head coach Pitso Mosimane's success at the club has been rewarded with a two year extension to his contract.
Image: REUTERS/Ibraheem Al Omari

Pitso Mosimane’s two-year extension to his contract at Egyptian giants Al Ahly early this week adds another dimension to an epic Caf Champions League Group A match against Mamelodi Sundowns at the FNB Stadium on Saturday.

The former Bafana Bafana coach will continue his stay with Ahly until June 2024, completing four years at the club since his shock move in October 2020. The faith shown by Ahly’s board in Mosimane is not surprising given what Jingles has achieved in the last 16 months.

Giving Mosimane his new contract on the eve of Saturday’s important match could prove to be a masterstroke on the part Ahly’s president Mahmoud Ibrahim El Khatib. This will only encourage Mosimane to dig deep to reverse the first leg loss to Sundowns last month.

Ahly, who are gunning for a record third successive Champions League title with Mosimane, are not guaranteed passage to the quarterfinals, having started the group matches with a 0-0 draw away to Sudanese club Al-Hilal and a 1-0 home loss to Sundowns, before bouncing back with a 3-2 victory over the other Sudanese club Al-Merrikh at home last week.

Ahly are defending champions, they’ve got the best players and the best coach on the continent. That we won in Cairo doesn’t give us a licence to be complacent at home.

But which team is assured of its place in the last eight in this group? Sundowns may be on top with seven points, but they too will need at least three or four more points to sail safely into the knockout stages.

By the time Sundowns meet Ahly on Saturday, Al-Merrikh could be level with them on seven points, as the two Sudanese giants play on Friday.

A win for Al-Merrikh and Ahly this weekend will mean three teams in this group will be on seven points with two matches remaining. That scenario should give everyone a clear picture how tough this group is.

El Khatib’s decision to extend Mosimane’s deal with all this going on shows the confidence he has in a coach who’s already brought two Champions League titles, the Egyptian Cup and two Caf Super Cup trophies in less than two years at the club.

Mosimane has said many times that he wants to equal and possibly beat Manuel Jose’s astonishing record of four Champions League trophies with Ahly. The Portuguese coach spent just over six years in Cairo between 2003 and 2009 and is one of the main reasons why Ahly boasts of 10 Champions League gongs, five more than nearest rivals Zamalek of Egypt and TP Mazembe of DR Congo.

Saturday’s tie promises to be like a chess game, and the team that so much as blinks will get punished. Out of all the previous three clashes between Ahly and Sundowns in SA since the 2018-2019 season, this is the second time Ahly return with their backs to the wall.

Ahly got a 5-0 drubbing away to Sundowns — with Mosimane at the helm — in 2018-2019  in what was a first leg quarterfinal tie that they went on to lose 5-1 on aggregate after only winning 1-0 in the return leg in Cairo.

The other two 1-1 draws in group matches came in the past two Champions League editions that Ahly went on to win with Mosimane. But those were basically games that Ahly came to play with no pressure, having done the business at home.

Thapelo Morena’s winning strike for Sundowns in Cairo dealt Mosimane’s team a huge blow. Mosimane will come to Saturday’s game knowing that even a draw may not be an ideal result, especially if Al-Merrikh win against Al-Hilal on Friday.

When I spoke to Sundowns goalkeeper Kennedy Mweene about Saturday’s game he emphasised one thing: you can’t afford to underestimate Ahly simply because you’re playing at home.

“Ahly are defending champions, they’ve got the best players and the best coach on the continent. That we won in Cairo doesn’t give us licence to be complacent at home. People must remember we haven’t booked our place in the next round yet, so there’s no reason for us to take things lightly,” the Zambian-born gloveman said.

Mweene’s assertion is spot on and I know the Sundowns coaches will be emphasising the same point to the players this week. Sundowns will also be aware that Mosimane comes into this clash super pumped up to produce a result after the extension of his contract.

Do you play for a draw if you’re a Sundowns? Certainly not. This is also not a match in which one of the teams can afford to sit back and try to catch the other on the break. You can’t do that for 90 minutes, especially not against Ahly’s attacking acumen.

We should expect an open match because both teams need a win. Both will try to balance their attacking with solid defending. A slim victory by the odd goal is what we should expect.

Playing at home won’t give Sundowns much advantage. They need to frustrate Ahly. The best way to do that will be to keep things tight at the back, while constantly probing for a goal right until the end.

As with what happened in Cairo, these matches are won when one team loses possession in a critical part of the field and they don’t have enough numbers to defend the other side’s attack.

Mweene alluded to this fact when he said being switched on for the entire 90 to 95 minutes will be critical. “It’s a game of small margins. We’ve learn the hard way in recent games against Ahly where we’d dominate possession but we still lose because of lapse in concentration at a critical time,” he said.

Because there are so many variables I can’t even attempt to say which way the Saturday’s game will go, except to add that the team who are “switched on” for the entire afternoon, as Mweene says, are likely to win.

At least for Mosimane, no matter what happens on Saturday Ahly’s management have shown a great deal of deserved faith in him.

May the best team grab the full spoils.

Russian F1 driver all revved up after being dumped by team

If tech does it for you, sink your teeth into this