The former places too much importance on the notion of unbeaten fighters, while MMA doesn’t fuss about their losses 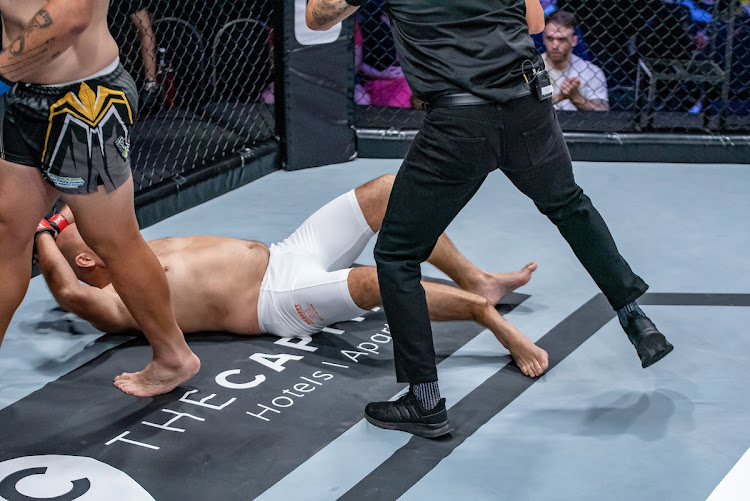 SHINDIG Willem Smith lies on the deck after breaking his shin at the EFC tournament in Johannesburg on Saturday.
Image: Supplied

The first EFC fight of the first EFC tournament I ever watched ended as suddenly as it was gruesome.

Poor Willem Smith, a heavyweight with a shaved head and tattoos who delivered a façade nearly as mean as the Falconetti character played so menacingly by William Smith in Rich Man Poor Man, broke his shin while kicking at the leg of his opponent, Ivan Strydom.

A loud sound that resembled a slap filled the arena and moments later Smith collapsed in pain. That’s when I noticed his shin had snapped right through, and his ankle and foot were dangling grotesquely.

This was the first occasion I had covered MMA since the first professional local cage-fighting tournament at Wembley Stadium in Johannesburg in 2000. One of the few things I remember about that tournament was that the fighters were all escorted to the cage by scantily clad women.

One fighter’s girlfriend took great offence at the bevy on her beau’s arms and stormed out the hall, which prompted him to run out after her, leaving his opponent stranded alone in the cage.

One fighter’s girlfriend took great offence at the bevy on her beau’s arms and stormed out the hall, which prompted him to run out after her, leaving his opponent stranded alone in the cage.

EFC has certainly taken this sport to higher levels, though I can’t say it’s easy for me to understand the grappling elements. Having covered boxing for more than a quarter of a century, there’s an artistry that pugilists produce that is easier to appreciate than when two fighters are rolling on the ground gripping each other.

One familiar face among the EFC personnel was Jan Bergman, who had one of the best left hooks in SA boxing, a weapon that was as effective as it was beautiful. The way Bergman delivered that bomb to destroy Grant Messias and Joseph Makaringe — both in the third round, but nine years apart — was as spectacular as it was frightening.

I’d like to say the thrill and brutality of boxing is what made it such a popular sport, more so than, say, traditional wrestling. The latter needed to create choreographed acts to bring in the crowds, though the pantomime survives to this day.

MMA has been around for 30-odd years now, but has dressed itself up superbly and, with TV, has grown substantially, especially with the establishment of UFC (Ultimate Fighting Championship) in the US. Boxing has lost ground, though the really big fights are still massive.

Grappling is critically important in MMA — more so than pure boxing ability — and it requires skill, strength and agility. I can’t tell the difference between holds and grips, and some of the positions on Saturday night might, I suspect, be found in the Kama Sutra.

The reason for my ignorance on grappling probably dates back to my brief dalliance with judo when I was about six years old. I surely had the distinction of being the most uninterested judoka in the history of the martial art.

For starters, classes were every Saturday morning. Early! When the sensei taught us various holds, as well as the intricate techniques to escape them, my mind drifted to other things, probably to the more enjoyable things I would be doing for the rest of my Saturday.

I quickly earned the nickname Dreamer. I was the second-smallest kid in the class and the only guy I could beat was the smallest laaitie. I was cannon fodder against the bigger okes, one of whom once threw me over his shoulder with such force that I nearly hit the ceiling, and then still had to negotiate my drop back to floor far below me. That probably accounts for my fear of heights.

I will probably always prefer boxing to MMA, but there is one element where MMA has the beating of boxing, and that’s not getting hung up about the losses on a fighter’s record.

Boxing applies too much importance to the idea of unbeaten fighters these days, and that results in some promoters picking opponents who will lose to their prospects rather than testing them.

That wasn’t always the case. Jack Dempsey had four losses by the time he challenged world heavyweight champion Jess Willard in 1919. Jersey Joe Walcott had 18 defeats when taking on Ezzard Charles in 1951 and “Cinderella Man” Jim Braddock had been beaten 25 times when he faced Max Baer in 1935.

Losers can grow to be winners — that’s actually the normal path of life for most people.

And on that level boxing is losing out.