No South Africans among World Rugby player of the year nominees, while Salah is ranked seventh in Ballon d’Or 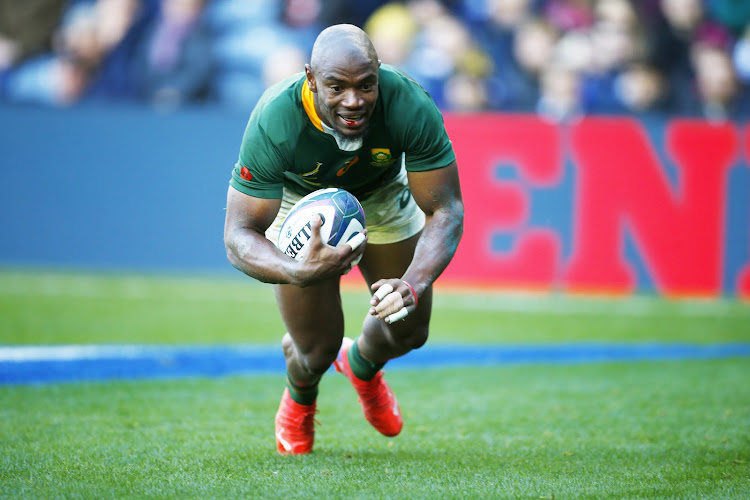 MAYBE NEXT YEAR? Even the extraordinary try-scoring feats of Springbok wing Makazole Mapimpi were not enough to stir the interest of the World Rugby judging panel.
Image: Steve Haag/Gallo Images

The end of another year is almost upon us. 'Tis the time to hand out orchids and onions, and while it is generally accepted not everyone can come out smelling like roses, this awards season has been particularly silly.

There has been indignation, even ridicule at how judging panels in two major global sports have gone about their business in determining the year’s top achievers. Soccer and rugby have attracted a fair amount of flak for what they have served up as the supposed cream in their respective sports.

Soccer’s prestigious Ballon d’Or, which was first awarded in 1956, has again gone to Lionel Messi, this time not for his metronomic scoring at former club Barcelona, but for finally helping steer Argentina to a Copa America title.

It is a feat that previously proved beyond his compass, with Argentina’s last success in the tournament in 1993, predating the Messi era.

If Africa’s footballers feel mildly underrepresented in their sport’s foremost annual gala, then the continent’s rugby players also have reason to arch an eyebrow.

The maestro has now won the Ballon d'Or on seven occasions, two times more than Portugal’s wizard Cristiano Ronaldo. The latter in an Instagram post seems to agree with the sentiment that Messi was an undeserving winner this year. He would, wouldn’t he?

Poland’s Robert Lewandowski, despite continuing his prodigious goal scoring feats of the last 18 months at Bayern Munich, finished 23 points behind Messi in the ranking that determines the Ballon d’Or winner.

The lack of a gold medal in his country’s colours counted heavily against him but, for sheer ability to impact matches he is involved in, few can argue Lewandowski’s credentials.

Similarly you could remonstrate Liverpool and Egypt’s Mohamed Salah deserves greater recognition than the seventh place he earned in the awards.

In a post match interview Salah just burst out laughing when reminded that he ranked seventh in the race to the Ballon d’Or.

Salah was the highest ranked African footballer, and the continent continues to have Liberia’s George Weah (in 1995) as its only winner of the award.

If Africa’s footballers feel mildly underrepresented in their sport’s foremost annual gala, then the continent’s rugby players also have reason to arch an eyebrow.

In a year in which the Springboks beat the British and Irish Lions in a Test series, bagged a win over the All Blacks and won eight of their 13 Tests after missing the entire 2019 playing roster, none were deemed good enough to crack a nomination for World Rugby’s player of the year award.

Eben Etzebeth consistently performed at the high end, but so too did Siya Kolisi, Trevor Nyakane, Damian de Allende and Lukhanyo Am, while Makazole Mapimpi hasn’t shown any signs of slowing down his remarkable try scoring run.

Instead Maro Itoje (England), Samu Kerevi (Australia), Michael Hooper (Australia) and Antoine Dupont (France) have been paraded as the nominees for the men’s award.

To be fair, it is difficult to look past Dupont as the overall winner, after more outstanding performances for the Tricolores, but the lack of SA or New Zealand representation among the nominees is perplexing, especially when you consider the high calibre of the individuals on the voting panel.

Of course, how award winners are determined can be a deeply subjective. That is part of the territory on which sport unapologetically operates.

Still, for it to be credible, voting procedures and criteria should be underpinned by a system that seeks to reward excellence through transparency and fairness. Regrettably, that isn’t always the case.

Armani pulls a rabbit out of the hat in sustainable move