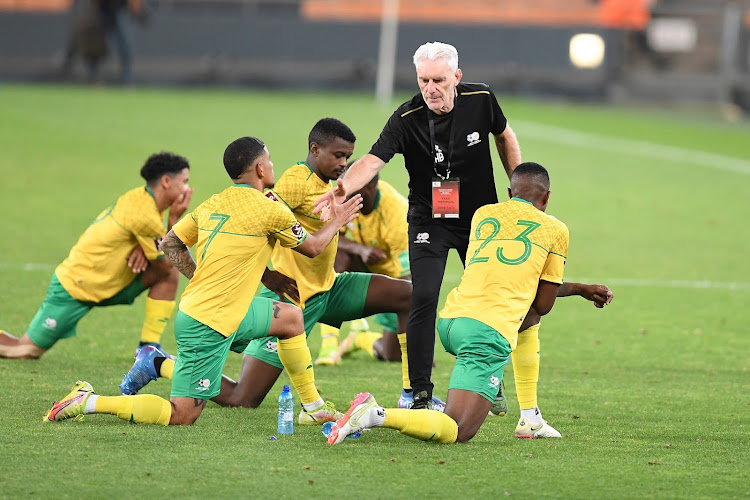 We should indeed feel disappointed that Bafana Bafana’s journey to qualify for the 2022 Fifa World Cup may have come unstuck.

We had so much hope for our team, even though our football still lacks that cutting edge in terms of winning and dominating opponents.

Four wins on a bounce was unheard of from Bafana in any qualification. Yes, that’s what the current team has done and no one can take that away from them.

That our fantastic run seems to have come to an abrupt end doesn’t mean this is the time to feel sorry for ourselves. We can’t stop some of us, including our young players, being emotional about it, but at some point we should accept our fate and move on.

That we don’t have a single player plying his trade in one of the top football leagues in the world — the English Premiership, Serie A, Bundesliga or La Liga — says a lot about the calibre of the current crop of players.

I hope Bafana coach Hugo Broos will lead our players in realising that their journey doesn’t end with the 1-0 defeat against Ghana on Sunday, in which the Senegalese referee, whose overall performance left a lot to be desired, awarded the hosts a dubious penalty.

Broos had done the right thing in preparing us for failure, pointing out that his main mission was not to qualify for Qatar but rather to build a strong team for the 2023 and 2025 Africa Cup of Nations (Afcon), as well as the 2026 Fifa World Cup.

Depending on Fifa’s verdict, after Safa’s appeal against Sunday’s result we may still be in with a shout for Qatar and who knows what will happen if we’re granted a replay.

While we wait for Fifa’s decision, I hope Broos is already plotting how he’ll strengthen the team and how he’ll blend in the other players who everyone has been asking be given a chance to prove their worth.

Between now and the start of the 2023 Afcon qualifiers in March, there’s a bit of time for Broos to monitor our local and overseas-based players. But surely the spine of his team should come from the one he had in the World Cup qualifiers.

Players such as skipper and goalkeeper Ronwen Williams, defenders Rushine De Reuck, midfielders Mothobi Mvala, Ethan Brooks and Teboho Mokoena, attackers Bongokuhle Hlongwane, Evidence Makgopa and Fagrie Lakay are some of those Broos should build his team around.

Surely the national coach can’t ignore the calls for Neo Maema, Themba Zwane, Lyle Lakay and Andile Jali to be given a chance. These are all Mamelodi Sundowns players, but I’m sure there are one or two others from local and overseas teams who are worth a look, especially if Bafana can get to play a few friendlies before the start of the 2023 Afcon qualifiers.

We should not forget that in terms of standards on the continent, we’re still lagging behind and it doesn’t help that Bafana players will be watching next year’s Afcon in Cameroon from the comfort of their sofas after their failure to qualify under Broos’s predecessor, Molefi Ntseki.

Bafana are ranked 66th, and based on this Broos believed we shouldn’t have raised our hopes too high because even if we had beaten Ghana, we still had to meet and win a playoff against one of those African powerhouses to reach Qatar.

International football is not easy and our situation is made harder by the fact that our players are certainly not among the best in the world. That we don’t have a single player plying his trade in one of the top football leagues in the world — the English Premiership (England), Serie A (Italy), Bundesliga (Germany) or La Liga (Spain) — says a lot about the calibre of the current crop of players.

That a South African team, Sundowns, last won the Caf Champions League in 2016 adds to how we’re viewed by the world.

While Sundowns supporters may be happy that their team remains the dominant force in the local league, the reality is that that alone doesn’t help SA football.

That the two Soweto giants, Orlando Pirates and Kaizer Chiefs, are battling season in and sason out to catch up with Sundowns is a huge problem for Bafana.

Chiefs and Pirates have only won one trophy between them in the domestic league in the past six seasons. Their current form doesn’t help Bafana at all.

It’s like that in most top leagues in the world. The giant football clubs in the country are the main feeders of successful national teams but that has long not been the case with Bucs and Amakhosi.

It’s something that Broos can’t do anything about, but those running these clubs must start asking themselves serious questions. Do they really care about the stability and future of our football, not only in these clubs, but in the country as a whole?

The setback Bafana suffered at the weekend challenges everyone who has anything to do with SA football to find ways to improve our national team. This can’t be only Broos’s problem.

A syndicate is behind the spate of central Joburg kidnappings, say locals