Bafana are just one or two injuries away from a goalkeeping ...

Far too many PSL clubs have foreign first-choice goalkeepers, leaving the cupboard bare for the Bafana coach 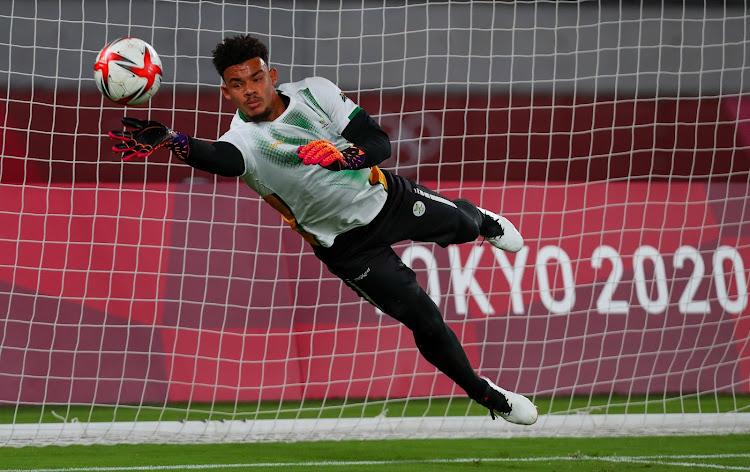 For months, one of the most educated football coaches in SA has been bombarding me, pointing out some of the wrongs besetting our football. He does point out good when it occurs, but those are drops in the ocean compared to his complaints.

His information is based on range of issues, including poor development of our footballers, coaches getting it wrong tactically and of course poor administration at club and national level.

For the sake of protecting him and not jeopardising his chances of getting employed in the future, I’ve chosen not to reveal his name.

One of the areas he’s been tackling religiously for months is goalkeeping. His concerns came to the fore this week when Bafana Bafana coach Hugo Broos named his squad to face Zimbabwe and Ghana in the two 2022 Fifa World Cup qualifiers this month.

Given our limitations in the goalkeeping department, there’s nothing wrong with Williams and Mothwa being picked but Bvuma's selection raised eyebrows.

Five Premiership matches were played on Tuesday and of the 10 goalkeepers who were on the field, only five South Africans, including Bafana skipper Williams, started in those matches.

What I’m sure of is that the coach who’s been warning me about SA’s goalkeeping deficiencies isn’t surprised that suddenly everyone now realises that there’s a problem.

If we had a watchful Premier Soccer League (PSL) and SA Football Association (Safa), which had SA football interests at heart instead of their pockets, we wouldn’t be having this discussion.

I say Bvuma’s inclusion in Bafana is problematic because he last played for Chiefs on September 12, in a 2-0 DStv Premiership loss to Mamelodi Sundowns. His club has since played six more matches in which Bvuma was on the bench once, while not even in the match day squad for the other five.

We can’t blame Broos for having limited options, and when it’s not viable for him to keep changing goalkeepers every time he selects a squad.

Broos is not as fortunate as Clive Barker, who during his time with the national team between 1994 and 1997 had an array of stars who could man the goalposts for Bafana at any given time.

Fast forward to today and you’ll be lucky to see five SA goalkeepers manning the goals in a round of PSL matches. Most of the time it will be Mothwa, Williams and Siyabonga Mpontshane at Orlando Pirates, who have been consistent in goals for their respective teams of late.

Others such as Sifiso Mlungwana and Nkosingiphile Gumede at Lamontville Golden Arrows, Jody February at Swallows FC and Oscarine Masuluke at Baroka FC are not guaranteed a start for their teams, as most coaches prefer their foreign counterparts.

League champions Sundowns have not been shy to have a foreign goalkeeper on the field and another on the bench, with the irony being that this team is coached by three SA-born coaches. It says a lot about their trust in the SA goalkeepers, Ricardo Goss and Reyaad Pieterse, that they have them on their books.

When Sundowns beat Cape Town City in the MTN8 cup final at the weekend, in goal they had Denis Onyango, whose five saves in the penalty shoot-out were record-breaking. On the bench the Brazilians had Zambian-born Kennedy Mweene. City had 35-year-old Angolan born Hugo Marques in goal.

This scenario repeats itself in many PSL matches and not one leader in our football administration has been vexed by this.

Five Premiership matches were played on Tuesday and of the 10 goalkeepers who were on the field, only five South Africans, including Bafana skipper Williams, started in those matches.

There was a similar but unexpected occurrence at Arrows where Gumede started for the first time this season. Another Namibian, Maximilian Mbaeva, is usually preferred in goal at Arrows.

The root of the problem was when the PSL increased the number of foreign players allowed to take the field to five from three. Some teams, when they have naturalised foreign players, like Sundowns in the case of Onyango and Mweene for instance, end up fielding more than five players not born in SA.

The result is the goalkeeping crisis that we now have.

An injury to our number one Williams may give us a huge headache one of these days. But what we should really be worried about is what happens in three to five years’ time when there are no young goalkeepers emerging or given a chance in our top-flight clubs.

A national team coach is now forced to select a Bvuma, who is not even making the bench in his team. It’s a horrendous situation that will be exposed time and again if the powers that be don’t catch a wake-up.

Egypt for instance took the dramatic decision in 2009 that no goalkeepers in their domestic league would be foreign. The Egyptian Football Association (EFA) tried to reverse this decision before the start of the 2020-2021 campaign, but had to retract when it received criticism from coaches who said it would hinder local keepers.

This is decision does not only affect the top-flight clubs in Egypt but all professional clubs.

I’m not advocating the PSL should do the same, but something has to be done. I think we should not allow two goalkeepers who won’t play for Bafana to be in the match-day squad. That could be a start and, if that doesn’t work, we may be forced to go the Egyptian route.

SA football lacks forward thinking leaders in administration. We seem to react every time there’s a huge problem. Well, we’ve reached that time when Broos is forced to select a Bvuma, who has had no game time for weeks at Chiefs, and there seems to be no one better to take his place.

We’re not a country that produces goalkeepers who are starring for clubs abroad. That ended with Hans Vonk, when he was playing for SC Heerenven and Ajax Amsterdam in Holland more than two decades ago.

With that being the case, we have no option but to start giving our goalkeepers more game time in PSL matches. The pool we now have for Bafana is way too thin and can’t be left as it is for long.

If only our administrators would wake up, listen and take action.

The Boks seem to be very Fassi about experience

In Nepal, a dog’s life is a god’s life