Blast from the past: Binder gives opponents the slip to floor it ...

Blast from the past: Binder gives opponents the slip to floor it to first 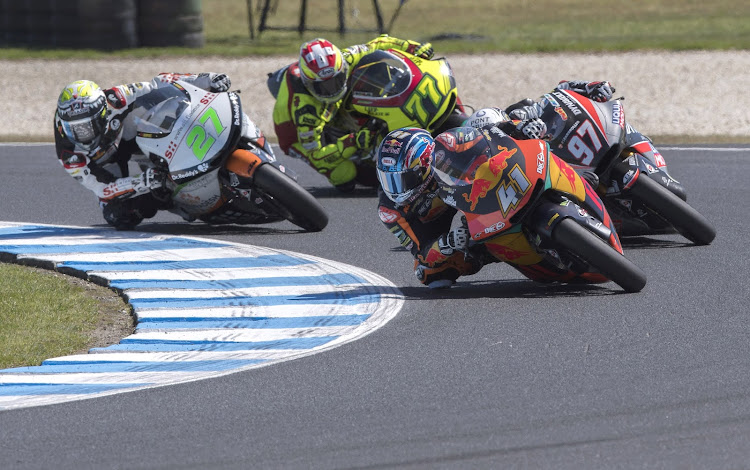 Binder on a bender Brad Binder and Red Bull KTM Ajo leads the field of the Moto2 race during the MotoGP of Australia at the Phillip Island Grand Prix Circuit on October 28 2018.
Image: Mirco Lazzari gp/Getty Images

1994 — The Proteas lose their 10th ODI in a row, going down by six wickets against Pakistan in Faisalabad. Openers Gary Kirsten (69) and captain Kepler Wessels (51) helped SA to 222/4, but the hosts raced to victory inside 45 overs. That remains SA’s worst losing streak, though it didn’t include a nine-wicket loss to Holland in a match that lacked ODI status the previous encounter. The SA team of 2004 matched the run of 10 straight losses.

2000 — Opening batsman Gary Kirsten scores 101 and Jacques Kallis 93 to help the Proteas chase down the 288-run target and beat New Zealand by five wickets in the fourth ODI in Kimberley for an unassailable 3-0 lead in the six-match series.

2005 — Jacques Kallis top-scores for the Proteas as they beat New Zealand by 19 runs in the second ODI at Newlands in Cape Town for a 2-0 lead in the five-match series. Makhaya Ntini and Charl Langeveldt took three wickets each as the visitors were bowled out for 182.

2011 — Australia down the Proteas by three wickets in Durban to win the three-ODI series 2-1. SA had scored 222/6 in their 50 overs, after leading knocks by Jacques Kallis (54) and Hashim Amla (52). But Shane Watson’s 49 from 46 balls laid the platform for the Aussies who reached the target with 15 balls remaining.

2011 — Moruti Mthalane retains his IBF flyweight crown by stopping Andrea Sarritzu of Italy in the seventh round in Cagliari.

2018 — Brad Binder wins his third Moto2 race of the season as he triumphs at the Australian motorcycle grand prix at the Phillip Island circuit. Binder went on to finish the season ranked third overall, up five places from 2017.

Diving legend Louganis comes out with it: did HIV ...

Blast from the past: One of SA’s classic ring ...

Blast from the past: Toweel’s kind words help ...

It’s all Greek to foreign soccer coaches in China