Bledisloe opener is an ominous warning to Boks

Bledisloe opener is an ominous warning to Boks

If the All Blacks-Wallabies clash is anything to go by, we have a gargantuan task at the Rugby Championship 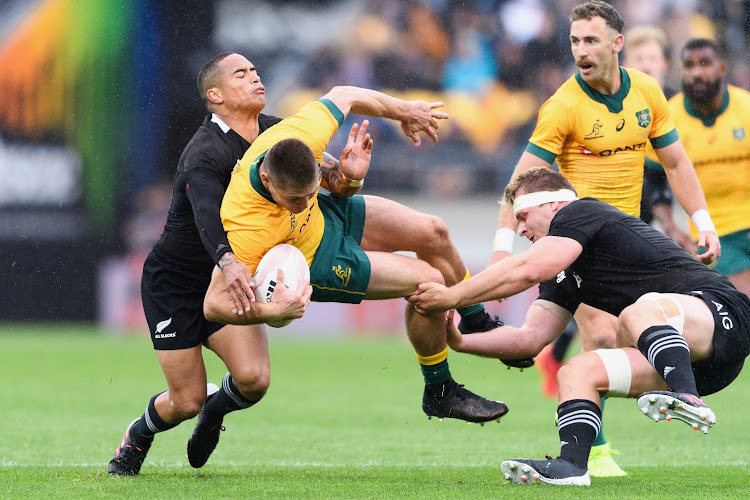 Uplifting encounter James O'Connor of the Wallabies is tackled by Aaron Smith and Sam Cane of the All Blacks during the Bledisloe Cup opener in Wellington, New Zealand.
Image: Getty Images/Kai Schwoerer

Last week’s Bledisloe Cup opener between New Zealand and Australia was always going to be a keenly observed clash for Rassie Erasmus and the rest of the Springboks brains trust.

It would have given SA Rugby’s director of rugby a glimpse of what to expect should the Boks get to play in the Rugby Championship (RC) in November and December.

At the time of writing their participation was very much still in the balance, but even if the plug gets pulled on the reigning Rugby World Cup (RWC) holders Erasmus and Co got a pretty good idea of what their team will be up against when they next meet their Australasian counterparts.

From a SA perspective the Bledisloe Cup tie provided a yardstick against which the Springboks could measure themselves especially when you consider the domestic rugby has only just restarted after Covid-19 lockdown restrictions slammed the brakes on the season in March.

New Zealand got their season back up and running in the second week of June, while the Aussies got their competitive juices flowing three weeks later.

In SA however the season only twitched back to life at the end of last month, giving our Australasian adversaries an almost four-month head start.

On top of that, when you consider preparation for the RC, the All Blacks and the Wallabies would have seen combat at the highest level which is likely to further widen the gap in their state of readiness compared with the Boks.

Last weekend, Rennie’s team was unlucky not to record the Wallabies’ first win over the All Blacks in New Zealand since 2001. His team looked well drilled.

Last weekend’s clash in Wellington would have left Erasmus and Co under no illusions about the gargantuan task the Boks are likely to face in the RC should they get to go.

Despite the wet conditions the All Blacks and the Wallabies hit the deck running and produced a match hitting the high notes in quality and intensity.

Both teams went into the match with coaches in charge of a Test team for the first time. Dave Rennie, Australia’s Kiwi-born coach, has long been held in high esteem, and he lived up to it.

His Wallaby team showed immeasurable improvement from the one Michael Cheika left in the wake of 2019’s world cup. Even before their quarterfinal exit in Japan the Wallabies had been in the doldrums. In the period between the 2015 RWC, where they reached the final, and their early exit in 2019 the Aussies had played 52 Tests returning a win ratio of just 44%.

Last weekend, Rennie’s team were unlucky not to record the Wallabies’ first win over the All Blacks in New Zealand since 2001. His team looked well drilled.

The pack fronted up, taking it to the All Blacks at scrum time as well as in the breakdown collisions. There was greater synergy between backs and forwards.

Moreover, they played with belief and in parts swagger, a commodity they have not possessed since Eddie Jones was in charge.

If anything, the All Blacks looked a yard off the pace. They did not boss the forward exchanges as some might have expected but they were typically ruthless when feeding off scraps. Under new coach Ian Foster they continue to manufacture scoring opportunities even when they seem out of reach.

That remains in their DNA irrespective of who’s in charge and, crucially, the All Blacks are still hard to beat.

The Wallabies may be a work in progress under Rennie and the All Blacks with Foster at the helm may be going through a period of transition, but the Springboks will likely find them redoubtable adversaries when they next meet.