For the moment, however, he is aiming for a place in the team and a stretch on the pitch 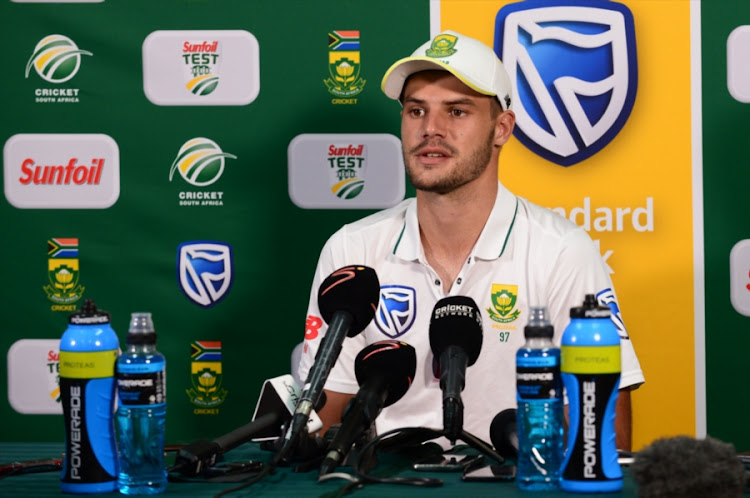 Aiden Markram says he “would give an absolute arm and a leg” to take over the vacant Test captaincy created by Faf du Plessis’s resignation in February.

“I don’t [want to] become desperate about it and would thoroughly enjoy it and be honoured if it was to be the case‚ but I have not looked into it too much‚” he said.

“I’ve been able [while maturing as a cricketer] to watch a franchise captain‚ a guy like Faf du Plessis, captain and it is just something that I would love to do.

“Having said that though‚ I have never given captaining my country too much of a thought,” said the 25-year-old, who led the baby Proteas to Under-19 Cricket World Cup glory in 2014.

“It has always been a bit of shot in the dark for me, but now my name is in the hat, so to speak, for people writing news.”

To fly at this World Cup, we need superstars in the wings

And we've got them: Aiden Markram, Chris Morris, Dwaine Pretorius and Tabraiz Shamsi are raring to go
Sport
2 years ago

Director of cricket Graeme Smith has confirmed that Quinton de Kock will lead the SA team in the shorter formats of the game, so the Test captaincy is up for grabs.

Given there are no clear standout candidates‚ Markram’s name is in the mix.

From a personal perspective, I have really enjoyed the captaincy and the responsibilities that come with it.

In the absence of an injured Du Plessis, Markram led the Proteas ODI side in a series against India in 2018, in a match he would rather forget. They were thrashed 5-1.

“From a personal perspective‚ I have really enjoyed the captaincy and the responsibilities that come with it.

“It is one of those things where, if it were to happen, it would be amazing, but if not‚ there are plenty of good leaders within the environment that will take the team forward with the management.”

Markram, whose  season was obliterated by injury in the recently finished campaign, said he dreamed of hoisting the Test mace aloft as leader of the Proteas.

“I definitely would like to be a part of the number one Test-ranked team and that is obviously in the longer format.

“My main focus is to try to get into the side and stay on the field for the time being.”

Frazzle-free De Kock and Bavuma give SA its spine ...

New version of the Proteas has to pitch up at the ...

EDITORIAL | There are 19 ways to lie, but truth never dies