‘Inordinate rise in funeral and credit insurance claims’, and good news for a man who had to swerve to avoid cows 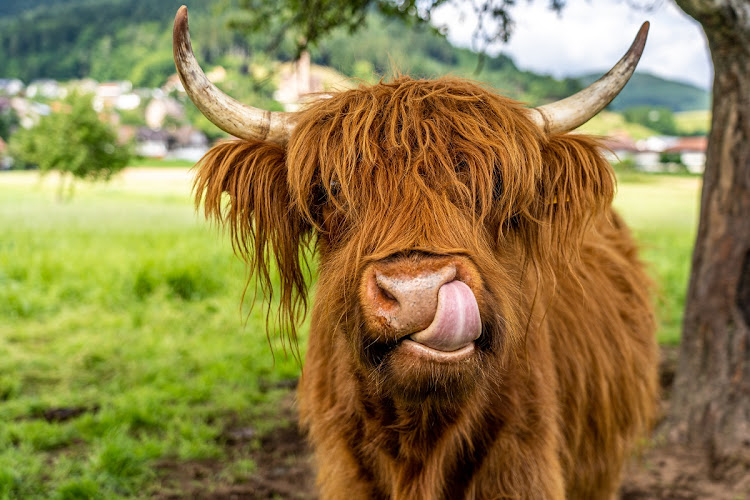 TONGUE A NOSE After much toing and froing, Old Mutual accepted a ruling that it pay out a man who had an accident while trying to dodge cows.
Image: 123RF/neofelizz

Long-term insurance clients would have collectively lost out on R200.7m in rejected claims had they not complained to the Ombudsman for Long-Term Insurance (OLTI) last year.

Releasing its joint annual report for 2021 with the Ombudsman for Short-Term Insurance (OSTI), the OLTI saw to it that a further almost R950,000 was awarded to complainants as compensation for “poor service”.

“Combined with an inordinate rise in the number of claims, especially funeral and credit insurance claims, this gave rise to many service-related complaints,” the office said.

More than 17,379 disgruntled policyholders approached the OLTI for help in 2021, 22% more than in 2020 and a new record for the number of complaints received in a year.

In contrast, the OSTI registered 11.7% fewer complaints in 2021 and, while all but 18% of adjudicated cases were settled in favour of the insurer, OSTI recovered R197m for them from their insurers. 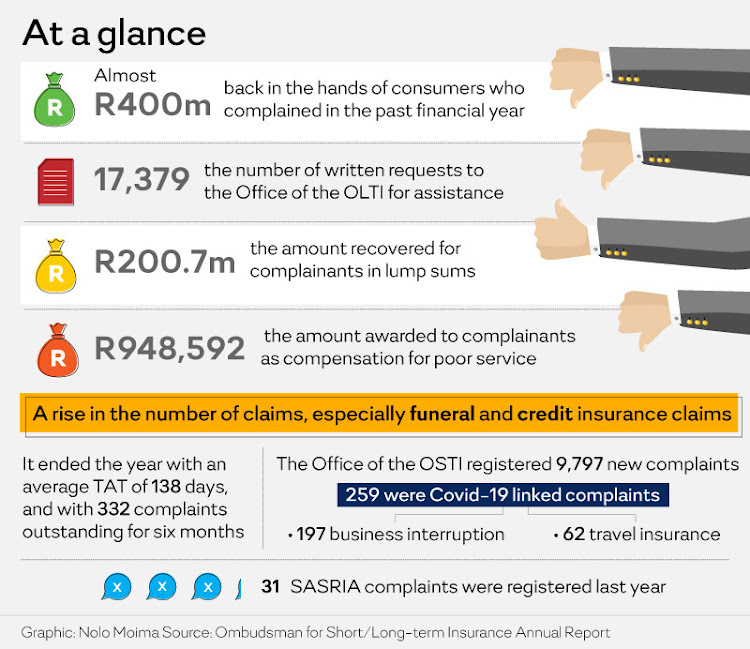 The ombuds for short- and long-term insurance released their annual report on Tuesday.
Image: Nolo Moima

The case studies featured in the 90-page report highlight many of the insurance issues which tripped up consumers last year, from motor accident claims rejected on the grounds of speeding to credit life policies being denied because insurers classed TERS payments as income.

Of the homeowners’ policy disputes handled by OSTI, almost half (48%) related to claims for damage caused by storms.

Last month’s storm in KZN, the most severe in 60 years, will no doubt feature strongly in OSTI’s 2022 report.

“The number of complaints relating to homeowners’ claims rejected by an insurer on the grounds that the loss or damage resulted from defective construction and/or maintenance issues increased by 17% in 2020 when compared to 2019,” OSTI said. And there was another leap last year.

“We urge policyholders to heed our advice [to keep their property or properly maintained] because the cost of repairs after an incident, such as a storm, is far greater than the cost of regular maintenance.

“Having said this, we encourage consumers to register a complaint with the office if they disagree with their insurer’s decision to reject a claim on these grounds or are not satisfied with the explanation provided to them.

“We gather and review all the evidence to determine not only whether the insurer had sufficient grounds to rely on the policy exclusion, but also whether this was done fairly.”

In 2021 10% of such cases were overturned by the office and insurers then paid R9.3m in claims.

Not for the first time, OSTI warned insurers they don’t have the right to reject motor accident claims solely on the grounds that their 'expert' determined the policyholder was speeding.

Many homeowners make the mistake of assuming the assessment carried out by a bank official when they apply for a bond is confirmation the building is sound, but that is not the case.

“That assessment is done to determine whether the property satisfies the bond holder’s equity requirements for the granting of a bond,” OSTI said.

“There is no obligation on an insurer to inspect the property prior to the inception of a policy.”

OSTI also advises homeowners to check what their policies cover in respect of powers surges, given load-shedding is here to stay.

In 2020 11% of household content disputes dealt with by OSTI related to power-surge claims. That increased to 16% last year.

“Some household contents insurance policies don’t include this cover, while others only cover power-surge damage for an additional premium if it is requested.”

Not for the first time, OSTI warned insurers they don’t have the right to reject motor accident claims solely on the grounds that their “expert” determined the policyholder was speeding.

“It is often an apparent expectation that once the insurer has presented its evidence, which includes an expert report, the conclusion reached or proposed by the expert should determine the outcome of the dispute.

“This view is more common than one would expect ... and seems to stem from an assumption that the report is not without its own fault,” OSTI said.

In an Old Mutual Insure case the insurer maintained a man tried to execute a right-hand turn at excessive speed and had an accident as a result.

The insurer branded that reckless and grossly negligent on his part, but the man said there were cows in the road. He thought he could safely pass them, but had to take evasive action when one of them jumped into his path.

OSTI found Old Mutual and its expert failed to prove their version and that the insured's was the more probably one.

Among the shortcomings in the report, OSTI said, was that the insurer glossed over the presence of the cows and what impact this would have had on their client.

“The insurer had therefore failed to prove that there was a causal link between the speed at which the insured vehicle travelled and the collision.”

A provisional ruling was subsequently made in favour of the insured, which Old Mutual again disputed.

Those who lost all their income as a result of Covid lockdowns, but had their credit life insurance claim rejected on the grounds they had received TERS payments, will take comfort from a OLTI case study featured in the report.

OSTI then made the provisional ruling final, at which point Old Mutual accepted the formal ruling and settled the claim.

King Price was also the subject of an OSTI formal ruling, for repudiating a client’s stolen car claim on the grounds he didn’t report the theft within 24 hours.

But OSTI held the view that the theft was indeed reported to SAPS within 24 hours and that the insurer was unable to demonstrate any prejudice.

The insurer agreed to abide by the formal ruling and the claim was paid.

Those who lost all their income as a result of Covid-19 lockdowns, but had their credit life insurance claims rejected on the grounds they had received TERS (Temporary Employee/Employer Relief Scheme) payments, will take comfort from an OLTI case study featured in the report.

The insurer rejected a claim for a home loan protection policy on the grounds the policyholder had received TERS payments it classed as income.

OLTI disagreed, saying TERS payments were benefits, created by statute, with the funds coming from National Disaster Benefit Fund, not the employer.

The insurer accepted its view and paid the loss of income claim.

The OLTI report also reported that 3Sixty Life Insurance, the subject of many complaints of unpaid funeral benefits, was placed under provisional curatorship in December 2021 after an urgent application by the Prudential Authority.

“We will see how the story unfolds in 2022 and trust that the interests of policyholders and beneficiaries will be paramount.

“It is worrisome that, in 2021 alone, our office issued 200 second reminders for a response to this insurer.”

OLTI named other life insurers that were sent more than five second reminders for a response that year.

Some long-term insurers have acted badly when the Ombud’s adjudicators take up their clients’ complaints, said Ombud Ron McLaren.

“I think it is time to draw attention to the regrettable fact that during the complaints resolution process, some insurers are at times guilty of behaviour which, on the part of a complainant, would have been classified as unreasonable conduct,” he said.

“Insurers should not treat the offices as adversaries and should not, in the complaints resolution process, address us as if we are their litigious opponents.”