So we won’t be sucked into oblivion, but here’s the black hole ...

So we won’t be sucked into oblivion, but here’s the black hole in our midst

In a huge breakthrough, scientists have photographed the supermassive black hole at the centre of the Milky Way 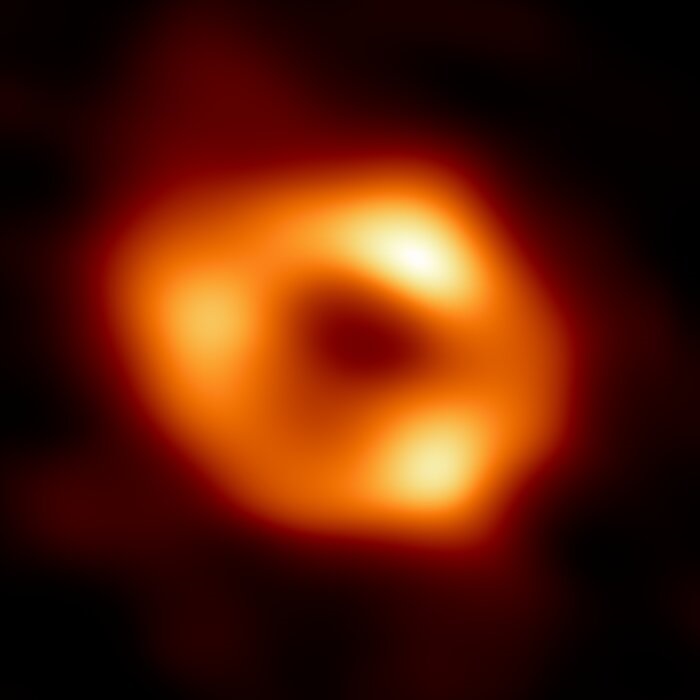 BACK TO THE FUTURE The first image of our black hole.
Image: Event Horizon Telescope Collaboration

Astronomers revealed on Thursday that, for the first time, they had captured an image of the supermassive black hole at the centre of our galaxy, the Milky Way.

The stunning image, which shows a flaming ring around the hole, was shown at press conferences held at the same time around the world, and comes after decades of technological advancement and intricate work that has taken more than 300 scientists from 80 institutes to perfect.

The black hole is 400-million times bigger than the sun and 27,000 light years from Earth and, though it can’t be seen because it is so dark, its edge is defined by a glowing ring of gas.

Scientists previously observed stars orbiting something invisible, compact and huge at the centre of the Milky Way, but before this image was captured they could not say definitively what it was.

“This result provides overwhelming evidence that the object is indeed a black hole and yields valuable clues about the workings of such giants, which are thought to reside at the centre of most galaxies. The image was produced by a global research team called the Event Horizon Telescope (EHT) Collaboration, using observations from a worldwide network of radio telescopes,” according to the European Southern Observatory (ESO).

What it Takes to Image a Black Hole

Its gravitational pull is so strong that light cannot escape and the dark central region, called a shadow, is the “bull’s eye” for scientists, as it provided the evidence they needed.

“The new view captures light bent by the powerful gravity of the black hole,” according to the ESO.

The last image of a black hole was captured in 2019 and in that case, it was not one in our galaxy.

While the Earth is rotating, telescopes from different sites around the world observe the same object for several hours and the data is recorded. This is then shipped to processing centres where it is combined on supercomputers

This “combines the world’s greatest radio telescopes into one Earth-sized camera”, said the ESO.

It also ticks boxes on Einstein’s theory of general relativity, which he penned more than a century ago.

“We were stunned by how well the size of the ring agreed with predictions from Einstein,” said scientist Geoffrey Bower, from Academia Sinica in Taipei.

“These unprecedented observations have greatly improved our understanding of what happens at the very centre of our galaxy and offer new insights on how these giant black holes interact with their surroundings.”

The EHT team’s results are being published this week in a special issue of The Astrophysical Journal Letters.

Scientists are particularly excited to finally have images of two black holes of very different sizes so they can compare and contrast them.

“The two black holes look remarkably similar, even though our galaxy’s black hole is more than 1,000 times smaller and less huge than M87*. We have two completely different types of galaxies and two very different black hole masses, but close to the edge of these black holes they look amazingly similar,” said Sera Markoff, co-chair of the EHT Science Council.

She said this tells us that general relativity governs these objects up close and any differences we see further away must be due to differences in the material that surrounds the black holes.

They are also using the new data to test theories and models of how gas behaves around supermassive black holes.

This process is not fully understood, but is thought to play a key role in shaping the formation and evolution of galaxies.