Warm and fuzzy: puppy rescue tales amid all the death from KZN ...

Warm and fuzzy: puppy rescue tales amid all the death from KZN floods

It’s unclear how many animals were killed in the recent deluge but several dogs, cats and reptiles got a second chance 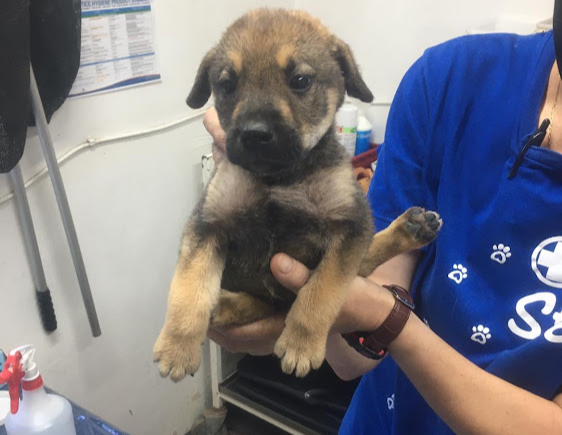 PUPPY LOVE A puppy who has been named Storm was rescued by members of the SPCA in Amanzimtoti after almost a week of failed attempts following floods in the province .
Image: SPCA Amanzimtoti

It is impossible to determine the number of animals killed or displaced after the deadly floods in KwaZulu-Natal earlier this month, according to the National Council of SPCAs (NSPCA).

At least 435 people were killed and thousands displaced during the deluge which was at its worst on April 11 and 12.

The NSPCA said a team was deployed to the province after the floods to assist with rescue and relief efforts as many animals, much like their human counterparts, were left without water, food or shelter, injured and prone to disease.

Shabnam Baran, the founder of animal rescue non-profit organisation Stray Paws, said they were inundated with calls for help, especially from people in townships.

“We attended to at least 30 calls for rescues. Those were just the ones we could get to. There were many that we couldn’t attend to because roads had been washed away or flooded.”

“Dogs and cats were washed away, buried under mudslides. It was so sad. We had calls for assistance where the owners managed to get out their home but their dogs had been tied up and drowned.”

Evans, said many animals were displaced or killed and their natural habitats destroyed.

There's been a few interesting things popping up on the beaches after the floods. A young Southern African Python was...

“On the evening after the floods we found an African rock python washed up on a beach near Westbrook. Among the debris, while looking for it, we saw many frogs — four species in total.”

Evans said rare species such as the spotted shovel-nosed frog were killed along some of the province’s coastline.

“I received photos of a number of reptiles that had been washed out of their natural habitat and onto the beach.”

But amid all the doom and gloom there was some reason to smile.

Animal lovers would not stand down despite the odds stacked against them.

In two separate incidents rescuers managed to save two puppies — who have both been named Storm.

Super proud of Inspector Luke and Field Officer Delani. A concerned member of the public alerted us on Thursday last...

Members of the SPCA in Amanzimtoti, on the KZN’s south coast, refused to be defeated by an evasive puppy that took shelter on a bridge after the floods.

Members of the animal shelter engineered what they described as a “puppy catcher” to rein in the scared animal who evaded their capture efforts for almost a week.

Recounting the heartwarming ordeal, SPCA Amanzimtoti shared pictures of the rescue and puppy on Facebook.

UPDATE: Our vet has named him Storm (formerly Bibu). He has been adopted by a wonderful family. Thank you for sharing...

Baran and her team also managed to rescue a puppy from a river in Inanda, north of Durban, and give it a new life.

“After his rescue we nurtured him and a couple of days later we managed to find him a loving family in Ballito. From a river in Inanda to the plush suburb of Ballito — he's living the dream.”