Musk loves Twitter so much he bought stock in it ... and got ...

Musk loves Twitter so much he bought stock in it ... and got $1bn richer

He now has a 9.2% stake in the social media company, but that’s just a fraction of his overall wealth 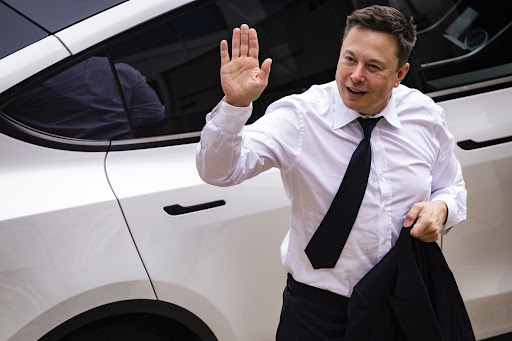 FORTUNATE ONE Elon Musk's net worth is up more than $1bn based on Twitter’s closing share price on March 14.
Image: Bloomberg

For years, Elon Musk’s net worth has been dominated by one stock: Tesla. His purchase of a 9.2% stake in Twitter, disclosed on Monday in a regulatory filing, adds an unusual element of diversification to his $273bn fortune.

Musk’s holding in his favoured social media platform was valued at $2.89bn (about R42bn) as of market close on Friday. So far he’s done well: the billionaire is up more than $1bn based on Twitter’s closing share price on March 14, the date of the event that triggered the disclosure, and its opening trading level on Monday.

Even though Musk is now Twitter’s biggest shareholder, his holding still represents just a fraction of his overall wealth. The vast majority of Musk’s net worth is tied to shares and options in Tesla, of which he’s CEO. He owns about 17% of the electric-vehicle maker, which has soared in value in recent years and catapulted Musk to the top of the list of the world’s richest people.

The Tesla co-founder has stayed focused on the company even as his fortune has soared. His family office, Excession, is run by longtime adviser Jared Birchall, a former Morgan Stanley banker, and is relatively small compared with other billionaires. 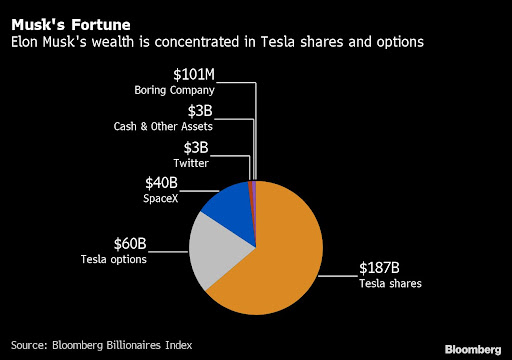 Musk doesn’t own much in the way of real estate after selling multiple mansions in California and vowing to “own no home” in 2020. He had disposed of very little of his Tesla stake until late 2021, when he sold millions of shares to cover the cost of what he said was an $11bn tax bill related to exercising options.

Even after his estimated taxes, the proceeds from those sales left Musk with cash holdings of more than $5.7bn before acquiring the Twitter shares.

Musk also signalled at the time he would become more of a philanthropist. In 2021, he donated more than 5-million Tesla shares to charity, worth about $5.7bn. That came a few weeks after suggesting on Twitter he would sell stock if the UN proved $6bn would help solve world hunger.

It’s unclear where that record donation for the billionaire actually went. He has a foundation, the Musk Foundation, that has historically granted less than $50m a year, largely to donor-advised funds. Musk has hired a professional poker player-turned-philanthropist to help him dole out the money.

Musk has become one of the biggest personalities on Twitter with his more than 80-million followers. He has also occasionally run into trouble. He’s looking to exit a 2018 deal with the US Securities and Exchange Commission that limited his posts about Tesla.

The type of SEC form he used often indicates the investor isn’t seeking to acquire control of a company, or to influence who controls it.

By Loren B Landau and Jean Pierre Misago
6 min read

A thief stole his wheelchair. Now, thanks to his community, he has two