Free in the Free State: tigers rescued after 15 years in train ...

Free in the Free State: tigers rescued after 15 years in train carriage

Paws for thought: they will taste life outside a cage for the first time in their lives after their transfer to SA 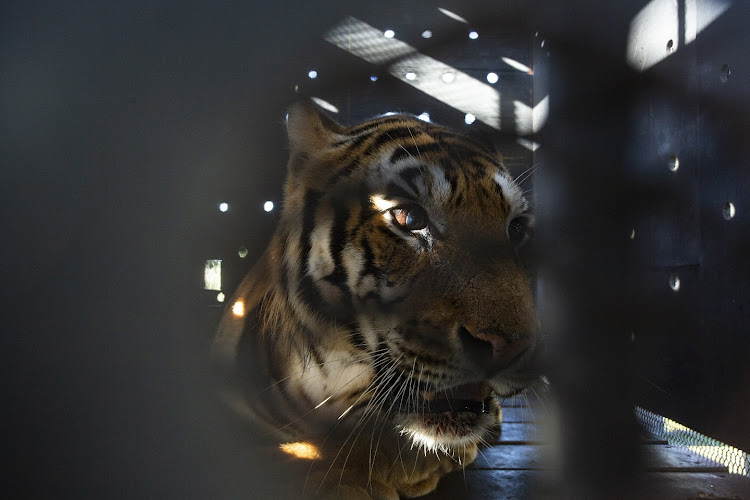 BURNING BRIGHT One of four tigers rescued from a train carriage in Argentina and now being brought to SA.
Image: FOUR PAWS | Hristo Vladev

When two tigers touch down in the eastern Free State this week, it will be the first time they will feel grass beneath their paws.

The two were born in a train carriage in the province of San Luis in Argentina, and will this week be moved to the LIONSROCK Big Cat Sanctuary in Bethlehem after a complicated rescue.

The pair are among four big cats living in the carriage that were rescued on March 9. They will be flown, under the careful eye of veterinary experts, to their new South African home. The rescue was facilitated by global animal welfare organisation FOUR PAWS.

For a period spanning more than 15 years, the animals — named Sandro, Mafalda, Gustavo and Messi — lived in a space not much bigger than a quarter of a tennis court. 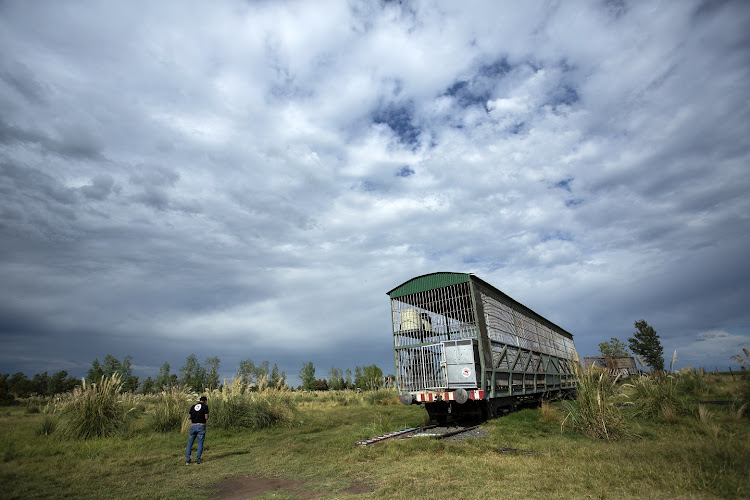 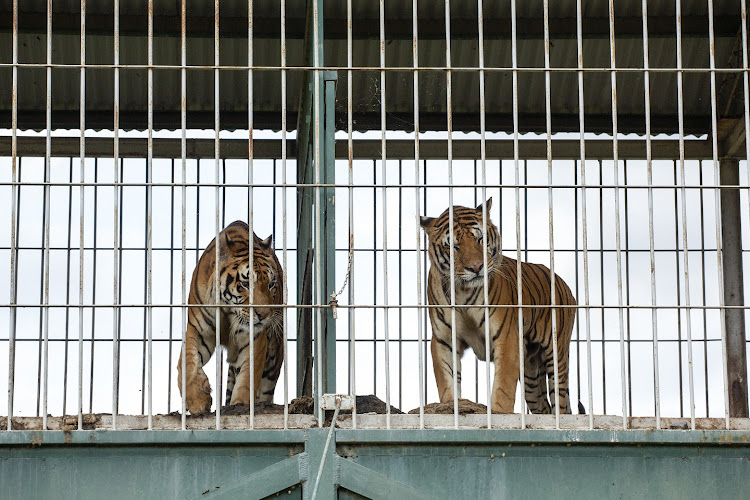 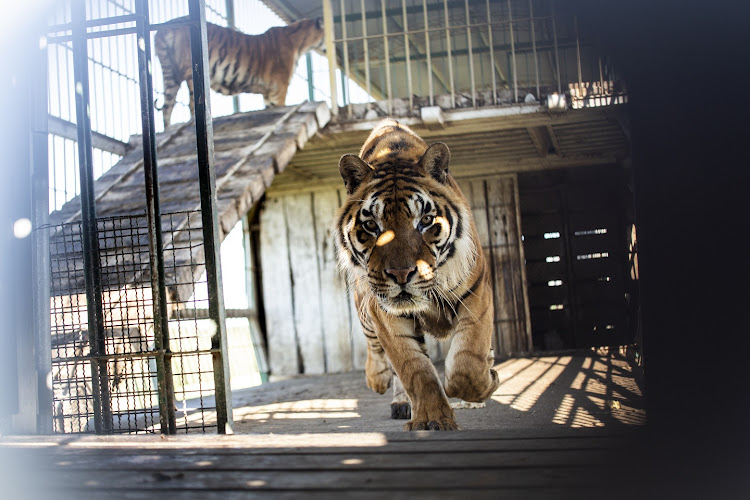 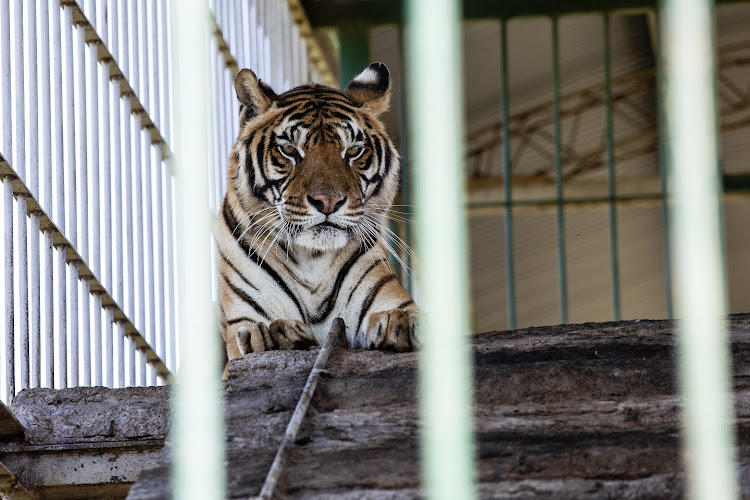 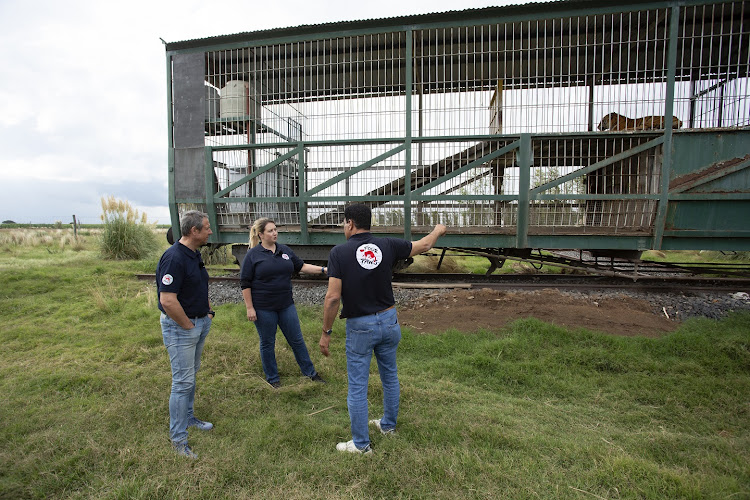 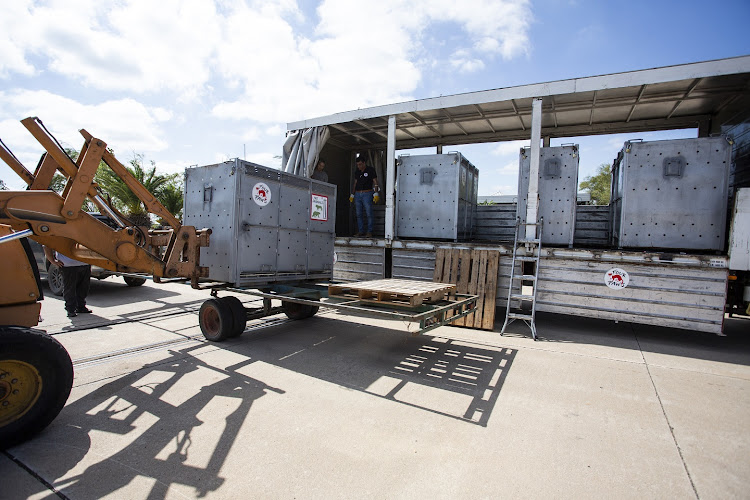 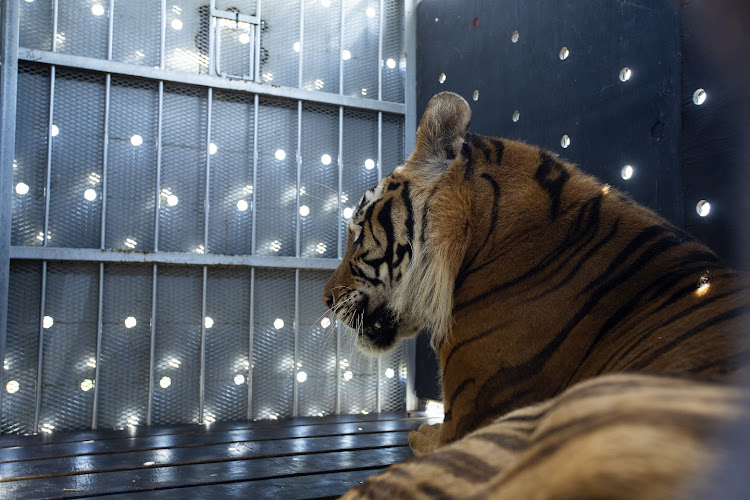 Mission leader and FOUR PAWS veterinarian Dr Amir Khalil said: “These tigers spent over 15 years in the same 75m² space, surrounded by the same landscape and without any stimulation of their instincts or natural behaviour. Our team needed to be around them so they would stay calm in our presence and during the transfer. It was and still is a stressful situation for the animals, but we made them as comfortable as possible.”

This meant putting soft floors, air holes and water containers in the transport crates. The animals will also be checked during the flight layovers from South America.

“The team will keep a particularly close eye on the oldest tiger because of his advanced age,” said Khalil.

How exactly the tigers found themselves in the carriage is something of a mystery.

Daniel Born, a FOUR PAWS media officer, said the original explanation was that “a circus had left them on a farm and the farmer began feeding them and the circus never returned”. The older pair — now 18 and 15 years old — had been in the carriages since 2007.

“But, the story has now changed a bit and we are not 100% sure of the exact origin of the tigers, except that they’ve been in the carriages for 15 years,” he said.

What is known is that the tigers weren’t sterilised and had cubs. Until their rescue on Wednesday, those cubs had never left the train carriage.

Tigers need to move, run, play and bathe. Being locked in a 75m² train carriage and only pacing back and forth for 15 years is not a tiger-worthy life.

The conditions they found themselves in were shocking. Even though the farmer had done his best to feed them, this did nothing more than keep them alive. The farmer didn’t immediately alert authorities to the tigers' presence because private ownership of them is illegal in Argentina.

“The train carriage was filthy with excrement and leftover meat and bones, but fortunately this is not the case any more. Tigers need to move, run, play and bathe. Being locked in a 75m² train carriage and only pacing back and forth for 15 years is not a tiger-worthy life. All those years in such a small space have affected their mental and physical wellbeing for sure,” said Khalil.

Luciana D’Abramo, chief development officer at FOUR PAWS, who is Argentinian herself, said: “Having seen how confined these tigers have lived for such a long time, knowing that they had spacious nature right in front of them but were never able to step beyond the train carriage floors, was overwhelming. It will be fantastic when they first step on grass and explore their new spacious home at LIONSROCK.”

The tigers’ new home, LIONSROCK, is one of 11 wild animal sanctuaries established by FOUR PAWS. It is home to more than 100 animals, most of which are big cats rescued from, among other places, war-ravaged zoos, circuses, private ownership and the canned hunting industry.

According to FOUR PAWS, there are only around 3,900 tigers left in the wild.

“Due to a lack of worldwide regulations, the commercial trade of big cats is flourishing. Live tigers are shipped across the world to be kept as pets and abused for human entertainment in circuses and zoos or for paid interactions. Tigers and other big cat species are killed for their skin, fur, bones and teeth,” the organisation said.

EDITORIAL | The state of Eskom is a national emergency. It must be fixed