‘This is a presidency at work to drive a coherent and effective programme of action across government,’ he says 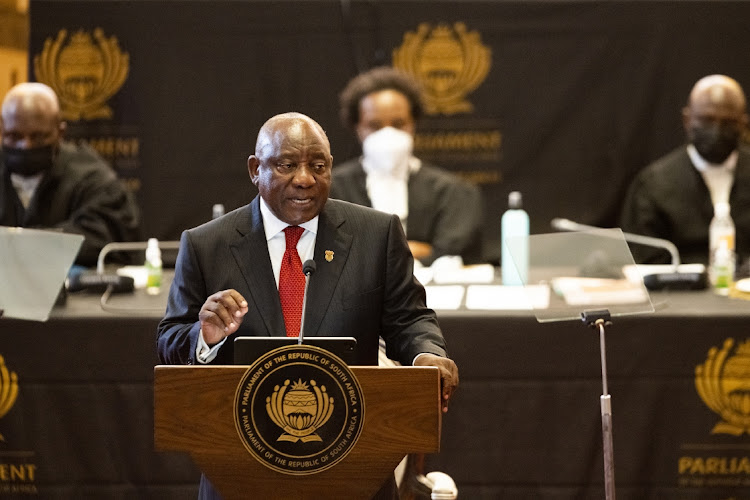 President Cyril Ramaphosa has responded to criticism that he has set up a 'parallel state' through the presidency to centralise power.
Image: Jaco Marais

President Cyril Ramaphosa has justified his centralising of power in the office of the presidency, saying he is not running “a parallel state”.

“This is a presidency at work to drive a coherent and effective programme of action across government,” said Ramaphosa on Wednesday.

Ramaphosa was replying to the state of the nation address debate after his address to a hybrid joint sitting of the national assembly and the national council of provinces last week Thursday.

The Sunday Times reported at the weekend that Ramaphosa had taken key government functions — such as intelligence-gathering, fighting corruption, overseeing infrastructure projects, eradicating small-business red tape and adding muscle to the Special Investigating Unit — into his office, setting up what critics say are parallel government structures.

The result is what is essentially a super-presidency, with powers and oversight over vital areas of government that are meant to add muscle to departmental efforts to fulfil their mandates.

Critics say the centralisation of power in his office underlines his technocratic approach to government, especially the economy, while others argue it highlights Ramaphosa’s distrust of, and lack of confidence in, some of his ministers.

The presidency has two ministers, three deputy ministers and no fewer than six deputy DGs. The president has nine advisers and dozens of experts he appointed to lead the more than 20 task teams he has set up since taking office in 2018.

During his state of the nation address last week, Ramaphosa announced that he had put together a task team, led by former mining executive Sipho Nkosi, to focus on cutting red tape that makes it difficult for small businesses to operate in SA.

The team, he said, will be based in the presidency. Its job will be, among other things, to look into immediate ways the government can ensure suppliers are paid within 30 days, something that has been identified as crippling businesses doing work for the state.

Responding to the state of the nation debate on Wednesday, Ramaphosa said: “It is worth noting that this programme is being coordinated from the presidency, bringing together 14 departments to implement the largest and fastest expansion of public employment in our country’s history.

“This is not the work of a bloated presidency. It is not a parallel state. This is a presidency at work to drive a coherent and effective programme of action across government.”

Emphasising his trust in his ministers, despite his bringing in advisers from the corporate sector, he said: “I preside over a cabinet of ministers who are committed to their responsibilities, ministers in whom I have the greatest of confidence, and from whom the people of this country have the highest expectations.”

Explaining the rationale behind Nkosi’s appointment, Ramaphosa said leaving no one behind meant focusing on small, medium and micro enterprises, small-scale farmers and on the informal economy.

“It is in these enterprises that most jobs will be created and through which poor South Africans will be able to earn a livelihood. We are removing constraints in the establishment and growth of these businesses and providing them with access to finance, skills and various capabilities,” he said.

This, he said, explains the work being done by the department of small business development to lower barriers to entry and remove impediments to growth through, among other things, a review of key legislation.

“It explains the redesign of the ‘bounce back’ loan scheme so that small businesses can more easily access the funds that they need. And it is our focus on small business that informs the expansion of the employment tax incentive to make it easier for small companies to hire more people.”

He said the initiative was formed to make it easier for firms to hire young people.

“The work that is under way to reduce red tape will have benefits for companies of all sizes, unleashing investment and growth,” he said. “The establishment of a team in the presidency to tackle red tape is similar to initiatives taken by governments around the world.

“It is located in the presidency because red tape is not found only in one department and there is no single department that can tackle red tape on its own. Not only does red tape increase the costs of doing business, but it also constrains South Africans in their everyday lives and in many of their interactions with government.”

Ramaphosa said he waited for three years or more to get a building permit to extend a room by 4m, which was a constraint. “People wait for years for water licences because of the bureaucratic inefficiency that has become embedded in the system.”