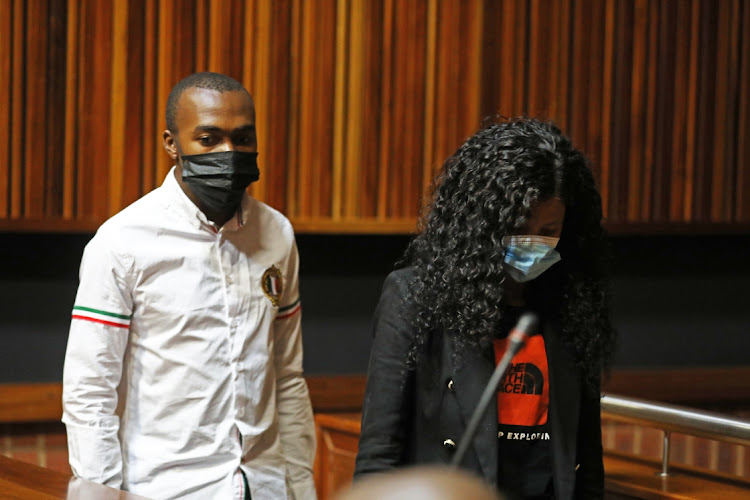 CO-ACCUSED Xolela Masebeni, a specialist engineer who is alleged to have fraudulently transferred about R103m into six accounts, with his wife Athembie Mpani, have been released on bail.
Image: Thapelo Morebudi

While Absa IT specialist Xolela Masebeni and his 21-year-old wife have chosen to remain mum on where six of the seven luxury cars they bought after allegedly stealing R103m are, the Palm Ridge magistrate’s court did not see this as grounds to keep them behind bars.

Magistrate Phillip Venter on Wednesday granted Masebeni and Athembile Mpani bail of R50,000 each, saying the court could not compel them to give incriminating evidence against themselves.

The couple stood side by side in the dock on Wednesday, looking modest in their choice of clothing. Mpani, who had appeared in previous court proceedings with a long curly wig, had on Wednesday swapped it for a brown headscarf and an old jersey.

Prosecutor Sharon Masedi cited the couple’s missing vehicles as one of the reasons why she wanted them kept behind bars, saying the refusal to disclose the whereabouts of the cars was tantamount to them refusing to cooperate.

Masebeni is accused of fraudulently transferring R103m into six bank accounts over four months last year. One of these is his account, one is his wife’s, one is a business account, and the other three belong to people whom the state believes have ties to the couple.

Besides buying seven cars with cash, the two also allegedly bought two properties in Khayelitsha on the same day and the state is accusing them of spending more than a quarter of a million rand on a Sandton shopping spree in one day.

Calling for the two be kept behind bars, Masedi expressed concerns that Masebeni, an IT whizz, could somehow still get access to information crucial to the case and destroy it or, worse, evade authorities.

Magistrate Phillip Venter commented that it would be interesting to hear how the 21-year-old unemployed mother of three managed to buy vehicles worth this much in cash, all in a matter of  days.

“I would like to mention that applicant one is an IT specialist. Putting him in front of a PC or laptop will mean he can access info that he has destroyed. He also has not being cooperative. He knew he was being probed by Absa but decided to destroy the evidence,” said Masedi, referring to how upon request from Absa to hand over his official work laptop, it found all the data wiped clean.

Masedi revealed that the police were currently in contact with Apple in the US to establish whether the wiped information can be retrieved.

But Venter was not convinced by the state’s grounds for opposing bail, saying while it was possible that Masebeni could meddle in the case, the state based this on suspicion and these claims were not necessarily substantiated.

Earlier in the week, proceedings had to be adjourned to verify where the two accused reside.

One police officer revealed that an aunt, who resided at the address where the pair claimed to live, denied this and instead took police to another property down the road and alleged that the pair were renting there while they were building their own house a short distance away.

On Wednesday, however, two affidavits from Masebeni’s brothers, Xolile and Xoliswa, were entered as evidence. In these, the brothers confirmed that they lived at the said Queenstown address with their fraud-accused brother and his wife, Mpani. This was despite one of the brothers earlier telling an officer that the couple did not reside there.

The state accepted the affidavits and agreed that the address in question be listed as the couple’s address.

Venter stressed that the presumption of innocence until proven otherwise remained of importance.

In their bail application, the married couple said they were parents of three minor children. They also provided financially for the Masebeni’s and their children.

The couple claimed to reside in an RDP house in Queenstown which they share with other family members.

Masebeni said he earned about R52,000 a month. His wife was unemployed and had only in recent months opened a bank account, using a letter from her local councillor as confirmation of her residential address.

The couple said they intended to plead not guilty to the charges against them.

While Masebeni had three vehicles registered in his name, with a total value of about R1m, he listed his household goods assets to be worth half a million. His unemployed wife owned the other four vehicles, which had a value of about R1.5m. This included a BMW 3 Series worth R700,000. Her household assets were worth about R300,000.

Looking at this information, Venter commented that it would be interesting to hear how the 21-year-old unemployed mother of three managed to buy vehicles worth this much in cash, all in a matter of  days. He said there was a strong suggestion that the vehicles were proceeds of crime.

The two co-accused informed the court that they had no passports, no business interests or family abroad and vowed not to interfere with the case.

While the state suggested that they be released on bail of R100,000 each, the pair said they could only afford R50,000 each — cash which they said would be scraped together by their family members.

They were ordered to remain at their Queenstown address and not leave the province without informing their investigating officer. The pair were also ordered to report to the police station twice a week. They were prohibited from applying for passports.

Masebeni was further barred from setting foot in ’s Sandton Absa premises and from making contact with his former colleagues.

The couple are barred from disposing of any of their assets.

The case returns to court next month.