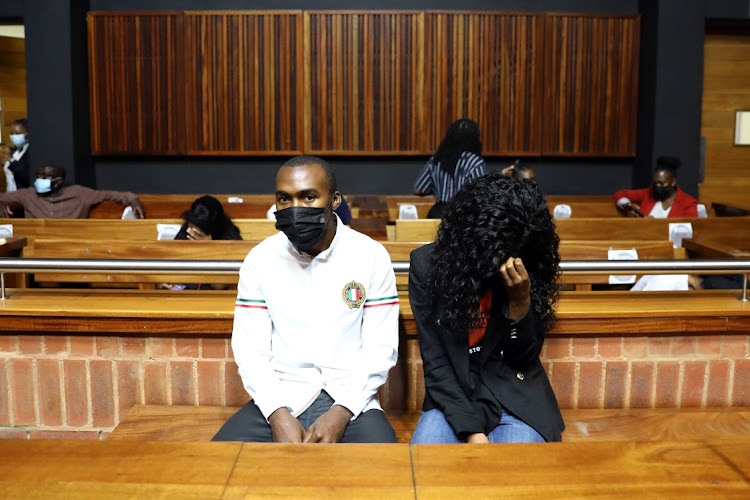 The couple accused of defrauding Absa of R103m spent nearly R200,000 in a single day at Louis Vuitton and Gucci stores in Johannesburg.

This emerged at the bail hearing of Absa specialist engineer Xolela Masebeni and his wife Athembile Mpani in the Johannesburg specialised commercial crime court on Monday.

On Monday the state called investigating officer Capt Oscar Molahlehile Mopeli to explain why bail was being opposed.

He said Absa’s forensic division received a complaint that R103m was taken from an account and they “could not locate any instruction for that account to be debited”.

He also testified that an account belonging to an unspecified individual received about R15m, while R59m was deposited into that person’s company bank account.

Mopeli said some of the money was transferred to FNB, Standard Bank and Nedbank accounts.

“We still have to unmask the identities of the holders of those bank accounts,” he said, adding that on the day Masebeni was arrested he handed over an Absa laptop that had been wiped clean.

In his affidavit Masebeni said he earned R52,000 a month, did not own property and lived with his wife and mother, aged 76, in an RDP house in Komani (formerly Queenstown). The 30-year-old said he owned three vehicles, including a 2019 Land Rover Discovery worth R500,000 and a Volvo D3.

In his affidavit Masebeni said he earned R52,000 a month, did not own property and lived with his wife and mother, aged 76, in an RDP house in Komani (formerly Queenstown).

Masebeni said he did not know who the state’s witnesses were and did not intend interfering with them.

Mpani, 21, said she was unemployed, financially dependent on her husband and did not own property.

During his testimony Mopeli said when police arrived at the address provided by the accused in Komani they found a person claiming to be Mpani’s aunt, who said the couple did not live there.

Mopeli said the woman accompanied police and Absa officials to another house in the same street that she said the couple was renting.

Further down the street there was another house they were allegedly building, he said, adding that according to the owners of a hardware shop where the couple bought building materials, the accused refused an offer of free delivery and insisted they would collect the supplies.

“They did not want to show the address where they were building the new house,” he said.

Mopeli said Masebeni also had two properties registered in his name in Khayelitsha, Cape Town. Both were bought on October 25 last year. One was worth R700,000, while the other was bought for R580,000.

He said the bank accounts had since been frozen.

Magistrate Phillip Venter wanted the issue of the residential address dealt with as there were conflicting versions.

Masebeni told his advocate, Nthabiseng Mokoena, that there were family members in court who could confirm he stayed at the listed address.

Venter asked Mopeli to take their statements and postponed the bail application until Wednesday.