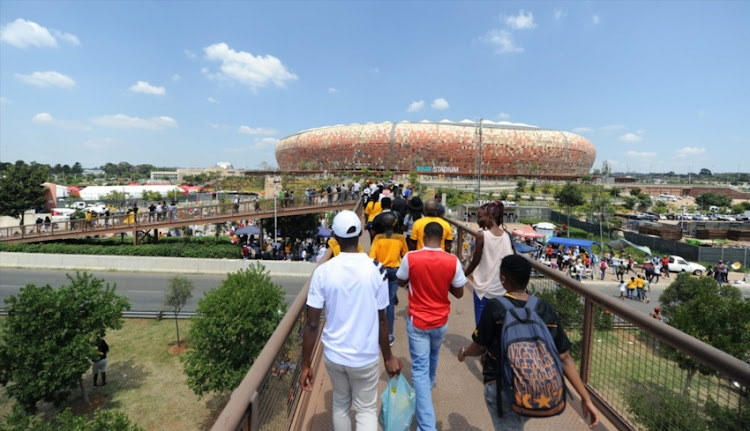 Sport fans are keen to return to stadiums for games and events.
Image: Gallo Images

The department of health is open to engagement with relevant sporting stakeholders in a move that may pave the way for the number of vaccinated spectators allowed at stadiums to be increased.

Currently, regulations regarding Covid-19 precautions only permit 2,000 spectators at sporting venues, but some sporting bodies have not taken up the allowance. In the case of the Premier Soccer League (PSL), this is  because it does not make financial sense for football clubs.

Health spokesperson Foster Mohale said though the department doesn’t decide on amendments to the Disaster Management Act,  it could make recommendations to the national coronavirus command council (NCCC) if formal requests are made to it by the department of sport and sporting bodies.

“Yes, as long as the relevant or responsible department is in agreement, the health department will advise from a health protocol point of view, and also provide a mechanism to verify the vaccination status of all those attending  the sports events,” Mohale said.

“This request can be done through the relevant department responsible for sports to the department of cooperative governance and traditional affairs (Cogta) for consideration after receiving proposals from the sports coordinating bodies.”

This past weekend EFF leader Julius Malema called on the PSL to challenge regulations that have limited attendance at stadiums for professional sports to 2,000.

Mohale was asked of any sports bodies had approached the department of health about increasing the number.

“No,” he responded. “Such proposals would normally be sent to relevant departments, like sports, arts and culture in this case.

“They will then formally engage with Cogta and, if they concur with the proposals from the sector, then Cogta will consider the proposal accordingly in line with the Disaster Management Act and publish the amended regulations.

“The health department does not decide the numbers. We make inputs and the NCCC decides on amendments based on all inputs from various stakeholders.”

Among sporting events at which limited numbers of fans have been allowed back to stadiums were Bafana Bafana’s 2022 World Cup qualifiers against Ethiopia and Zimbabwe, the MTN8 final between Mamelodi Sundowns and Cape Town City, and the ODI between the Proteas and Netherlands.

Professional sports were shut down by the onset of Covid-19 in March 2020, with government regulations allowing 2,000 vaccinated supporters back to stadiums as a first step towards allowing the return of crowds.

Football clubs have said they cannot cover the costs of allowing only 2,000 supporters in a stadium.

In the current cricket Test series between SA and India limited suite tickets have been available, but not for the general public. That was at the request of India, regarding the bio-bubble provisions asked for by the touring team.

Fans were allowed into the United Rugby Championship matches before the Omicron variant and fourth wave hit SA in December.

Homeless people come out in support of ‘scapegoat’ in parliament fire