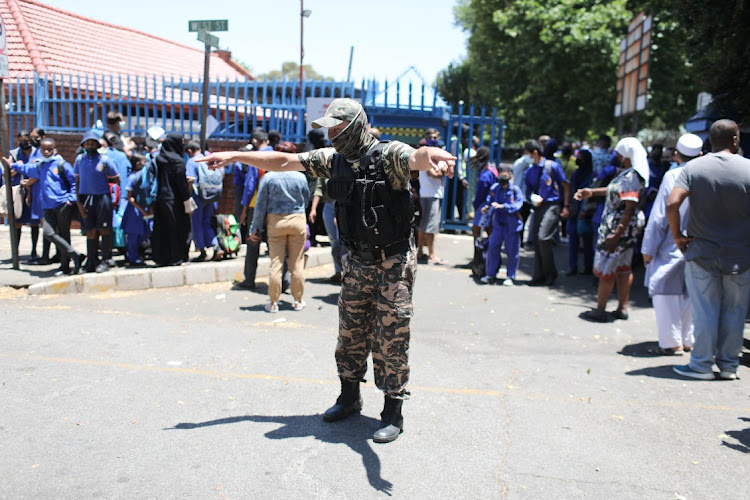 Members of private security direct pupils and traffic after the EP Baumann school in Mayfair was closed when a schoolgirl was kidnapped in November 2021. File photo.
Image: Alaister Russell

At least six police officers in Gauteng have been arrested on charges related to kidnappings.

This was revealed by police minister Bheki Cele in response to a parliamentary question for written reply posed in December by IFP MP Zandile Majozi.

According to Cele, it was only Gauteng that had police as criminal suspects in cases — dated 2019, 2020 and 2021 — of kidnappings. Four were SAPS members, and the other two officers were part of the metro police.

In one case in Pretoria West, two Tshwane metro police officers were arrested for suspected involvement in kidnapping.

However, the matter was provisionally withdrawn for “the tracking and tracing of the complainant”.

In Johannesburg, two SAPS members will appear in court on Friday for allegedly being co-conspirators with seven other suspects in a kidnapping case.

And two other SAPS members are due to appear for trial next month for suspected involvement in kidnappings in Bramley, Parkview and Rosebank.

Cele added that a mistrust of police had led families of kidnapped victims to approach private security companies for assistance.

“Private security companies form part of the multidisciplinary operational approach, which was adopted for the tracking and tracing of kidnappers and the rescuing of victims, in collaboration with the SAPS,” said Cele.

“Families of kidnapped victims will typically approach a private security company of their choice, who in turn, according to investigative procedures, will be the mediator between the joint operational centre and the family of the victim.

“They are referred to as partners, and collaboration is not limited to kidnappings but can include all other categories of crime, which are problematic.”

Cele added that no private security companies were, according to current information, implicated in the commission of such a crime.

EDITORIAL | Let fans into stadiums. There’s no reason not to