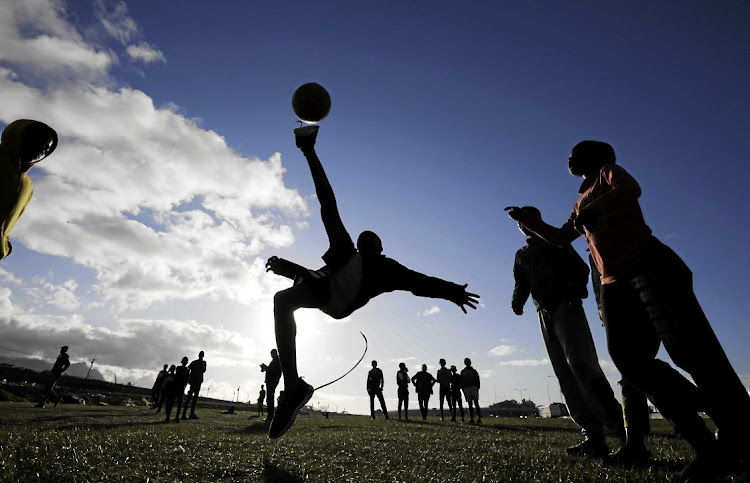 Youngsters from the informal settlements along the N2 near Cape Town airport ignore the lockdown to play football; they say they are safer from infection in the open air than they are in the crowded shacklands.
Image: Esa Alexander

To celebrate our award-winning journalism, Sunday Times Daily is republishing some of the best Sunday Times articles of the year, including those that walked away with an accolade in the Vodacom journalism awards. In the below piece, Esa Alexander won in the Photography category (Western Cape region) for a picture essay on how kids in Cape Town were playing soccer on patches of ground dotted along the N2 between Nyanga and Khayelitsha.

“Cristiano Ronaldo” strained to stop a threadbare soccer ball from hitting a car on the N2 freeway near Cape Town International Airport. Thankfully, it was trapped by muddy ground before it bounced onto the road.

This was not the Juventus goalscorer but Siphamandla Tyebileyo, 28, from Lloyd, an informal settlement in Philippi, who has adopted his idol’s moniker.

His team, Tigers FC, is one of several from informal settlements — including those named Barcelona and Europe — who have kicked social distancing to the curb. 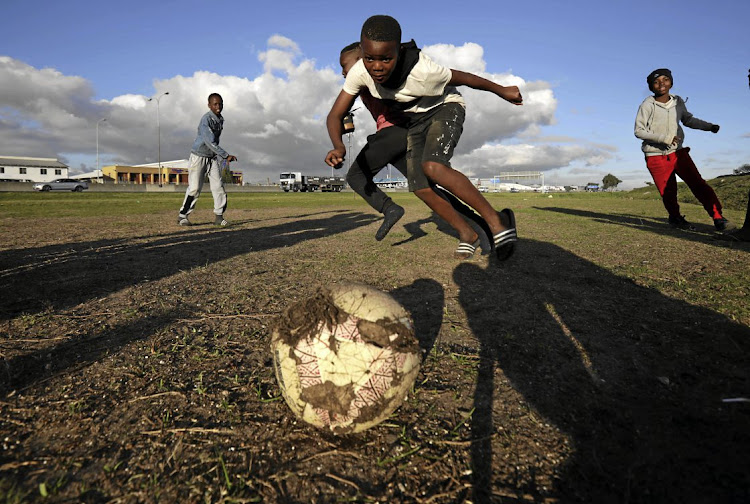 Boy players of the Tigers club keep their eye on the ball during a training session. Sport gives young people an alternative to gangs.
Image: Esa Alexander

They have played soccer on patches of land dotted along the N2, between Nyanga and Khayelitsha, all through the lockdown.

Players say they are more likely to contract Covid-19 in their overcrowded shantytowns than when they are playing soccer.

Keeping body and mind in shape

Tigers FC’s home ground is on the edge of a vlei sandwiched between the N2 and R300. Tyebileyo said the club, with 35 players, was started in July and has aligned its programme with the Premier Soccer League (PSL) calendar. 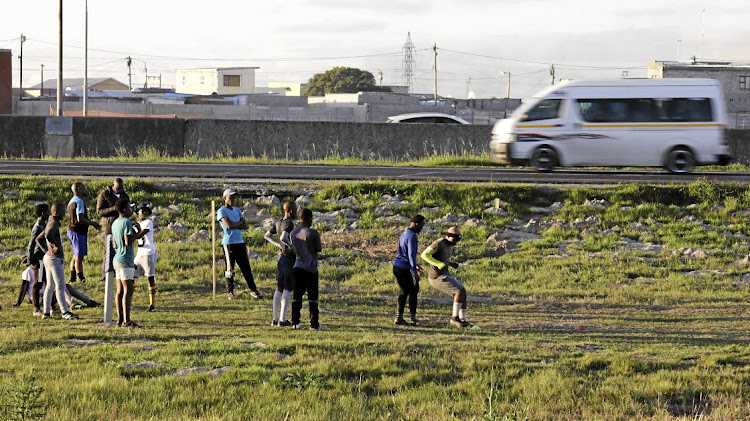 No vuvuzelas — just a constant hum from the traffic on the N2 outside Cape Town.
Image: Esa Alexander

“I am unemployed and I am not studying at the moment,” said Tyebileyo. “This team keeps us physically and mentally fit. The lockdown has been a very difficult time for us. We live in tiny shacks, we are overcrowded. Fortunately, there has been no case of Covid-19 in our community so far. We try by all means not to mix with people from other communities; we are like a family here.

“We have no recreational facilities in our community. We thought that we should rather use this piece of land for training. We are training hard and getting ready to join the local leagues when the season starts.” 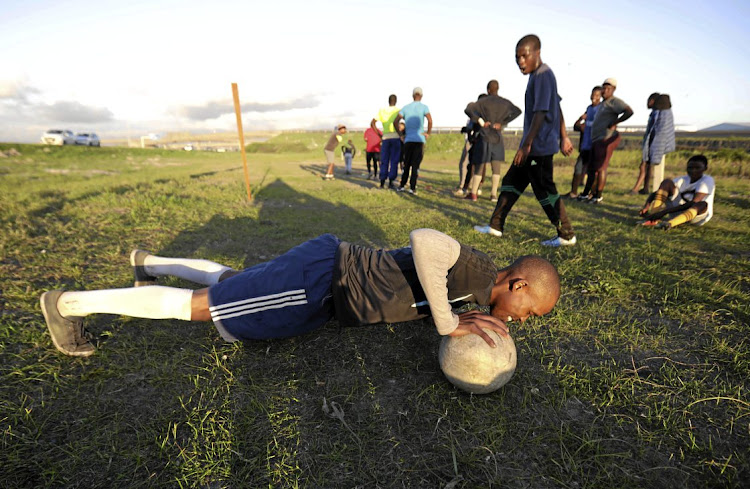 “Those who are idle in the informal settlement use drugs, sit on street corners waiting and rob residents. The lockdown has not stopped their access to illicit substances,” he said.

Boys and adults at Tigers FC train at different times, and Lemena said every player was required to contribute R20 towards kit and travelling expenses.

“At the moment we have nothing but a vision. The community supports us and some of them have contributed the little they have.” 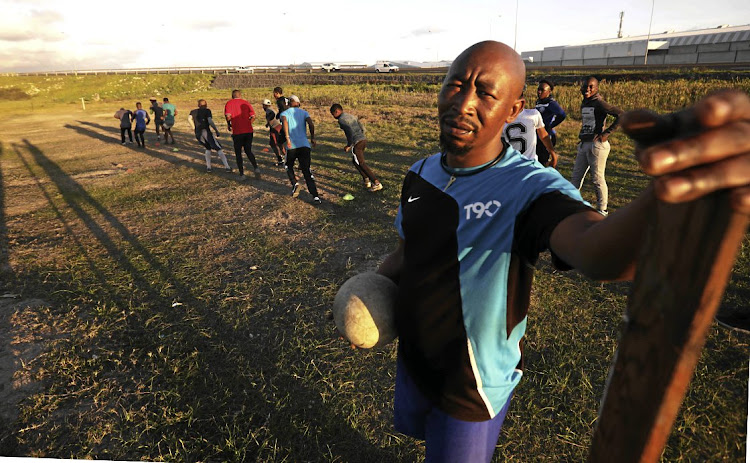 ‘We have nothing but a vision. The community supports us,’ says Tigers FC coach Thuso Lemena.
Image: Esa Alexander

A few kilometres closer to central Cape Town, opposite the informal settlement called Barcelona, Cape Town Spurs players were also sweating it out.

“Playing soccer every day keeps us away from the township gangs,” said Siyazamkela Qosholo, 27, the captain. 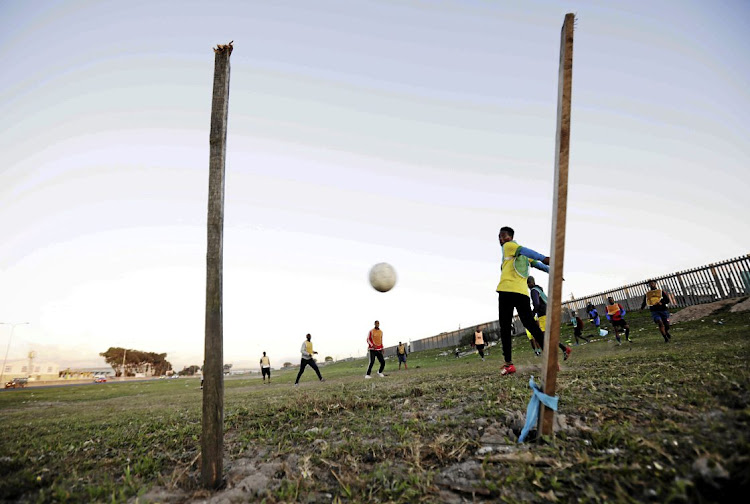 No saving that one!
Image: Esa Alexander

“We decided to come out and play when it was announced that the PSL was set to resume. We try to wear masks but we can’t maintain that throughout practice. Breathing becomes a big challenge. We start playing at 8am and finish at 10am daily. We then come back at 4pm until sunset.”

In nearby Europe, Ludwe Mgoqi shouted orders to 16 players. “We used to play in the local tournaments on occasions like Good Friday but we didn’t have that opportunity this year,” he said.

“We are worried about Covid-19. We have limited contact with people from other communities. In as much as we would like to stay indoors, we are overcrowded and we share taps and toilets. We are playing soccer here because we have nothing else do in the informal settlement. We don’t want to drink or take drugs.”

The ‘prophets’ who profit from selling the word of God