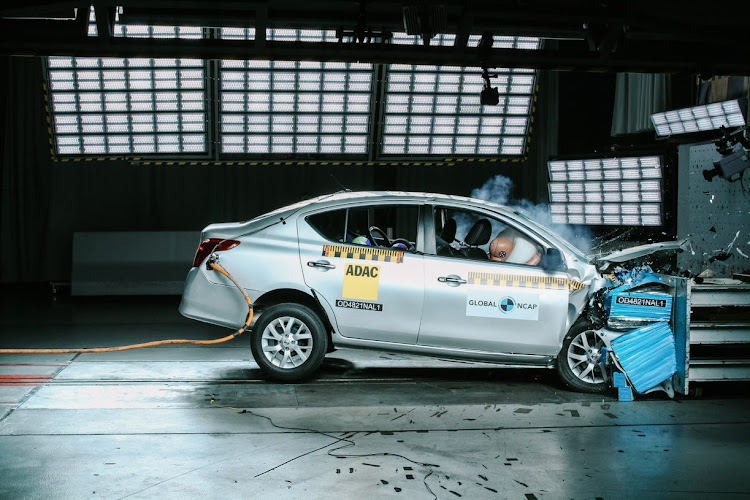 Could do better. That’s essentially what the Global NCAP (New Car Assessment Programme) and the Automobile Association of SA are telling Mazda and Nissan’s SA bosses about their crash safety results.

The fifth round of tests — conducted in a specialist facility outside Munich, Germany — saw the Mazda 2 awarded four stars (out of five) for adult occupant protection and three stars for child protection.

The Almera sells for just under R270,000 and had a sales spike in October this year. Its 735 sales that month put it in the top 20 best-selling new cars that month, possibly due to car rental company purchases.

They bring to 17 the number of cars which Global NCAP has bought anonymously from local dealers and then sent to that German facility, to be propelled at 64km/hr into a barrier that simulates an oncoming vehicle of equal size.

Those are not bad results, considering that this time last year, the #SaferCarsForAfrica partners revealed that the Chinese-made GWM Steed 5 bakkie scored a shocking zero stars when it was crash tested with two other local cars a few months earlier. At the time Global NCAP said: “Alarmingly (the bakkie) demonstrated a high probability of life threatening injury.”

Two others didn’t do well either — the Renault Kwid and Haval H1 were both only awarded two safety stars and both their body shells were found to be “unstable”.

In this latest round of testing, both the Mazda 2 and the Nissan Almera had seat failures on impact.

The Nissan’s driver seat partially detached from the rail, “increasing the risk of injuries”, and the Mazda suffered a backrest failure.

While the Mazda’s body shell was found to be stable — that is, capable of withstanding a higher-speed collision, its footwell was said to be unstable.

The Nissan fared worse in terms of stability — both its bodyshell and driver’s footwell area were rated as unstable. 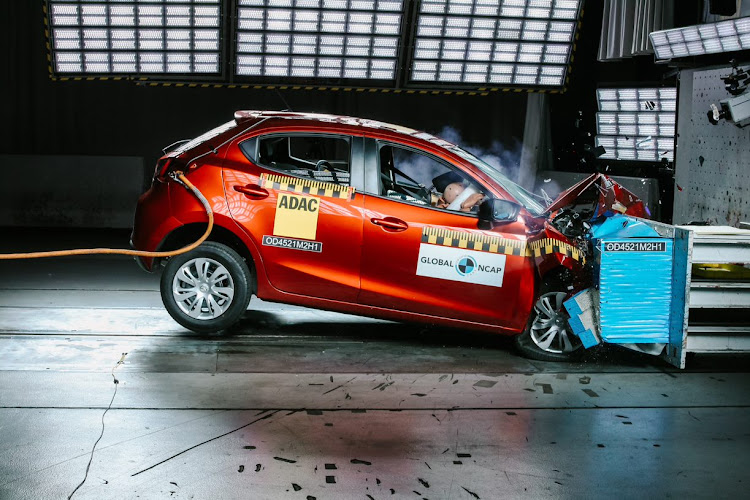 Though the seat issues did not have a significant impact on the assessment ratings — which are based on injuries noted on the crash test robots after the impact — Global NCAP said the failures were of “serious concern” and its officials have raised them with each manufacturer “as a matter of urgency”.

Both models were equipped with ISOFIX anchorages and, combined with effective child restraint systems, showed good protection for the child dummies as the cars came to a traumatic stop. But neither vehicle allows parents to disconnect the passenger airbag when a rear-facing baby seat is installed in the passenger seat, which was one of the reasons they didn’t get a higher safety rating. 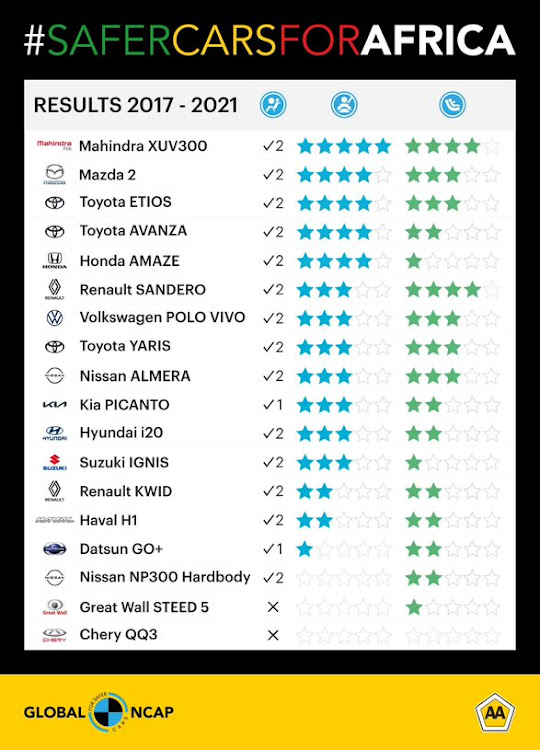 Alejandro Furas, NCAP’s outspoken secretary-general, said though the Mazda 2 and Nissan Almera had average crash test results, “we are concerned that both cars had failures in their driver seats, more severe in the Nissan than in the Mazda”.

“We call on both carmakers to review these failures as a matter of urgency,” he said.

“We would also call on them to improve the basic safety offered in these models as standard, adding electronic stability control (ESC), pedestrian protection and side body and head airbags as soon as possible.”

Both models have only driver and front passenger airbag protection.

The organisation strongly believes no vehicle should be sold anywhere in the world now without ESC (electronic stability control) and both front and side airbags, especially given that an ESC module for a car in production — if it has ABS brakes — costs no more than R1,256 and an airbag even less.

AA SA’s CEO Willem Groenewald, said the latest round of testing was “encouraging”, especially the four-star rating achieved by the Mazda 2. “But the results show there are still some safety deficiencies in vehicles available in SA, and this should serve as a marker to manufacturers and safety authorities of the need for improved basic safety features, which should be offered as standard on all models available locally.”

David Ward, executive president of the Towards Zero Foundation, said the sort of seat failures the two cars had were “troubling”.

“We would urge Mazda and Nissan to address these issues as a priority and to significantly improve the safety features equipped on their models as standard,” he said. “Consumers in Africa deserve the same levels of vehicle safety performance which are taken for granted in other parts of the world.”

While there are no crash-test facilities in SA, local manufacturers have been encouraged to offer their cars to NCAP to test but have not shown much interest. In contrast, in other countries, the same manufacturers have sponsored cars to be crash tested by NCAP in recent years, to market the cars with NCAP ratings.

This time last year, Furas told TimesLIVE that more than 50 models in Latin America and in India, including the Renault Duster, the Mahindra XUV300 and TATA Zest had submitted by their manufacturers for testing. That Mahindra SUV achieved a five-star rating for adult protection and four stars for child protection when crash tested in India, and because the identical vehicle is on sale in SA, the five-star rating applies here as well.

Vaccine equity is crucial for Africa, but there won’t be a gold rush: study