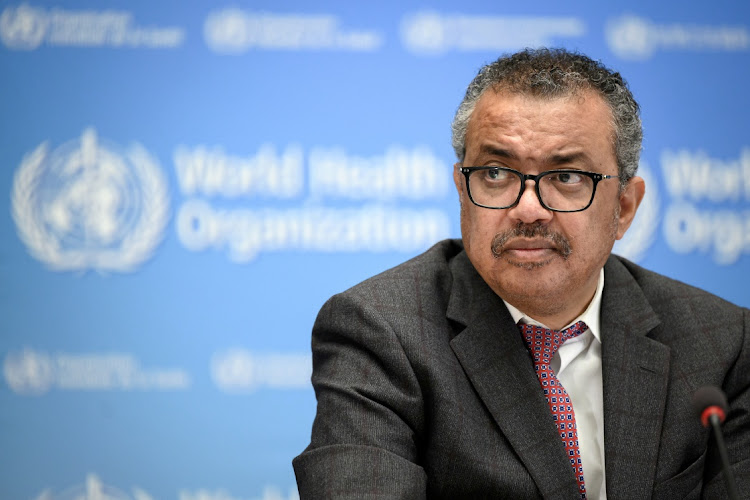 WHO'S SORRY NOW? New variant Omicron has now been detected in 23 countries as WHO head Dr Tedros Adhanom Ghebreyesus thanks SA for detecting, sequencing and sharing info on it.
Image: Fabrice Coffrini/ Pool via REUTERS/File Photo

Member states of the World Health Organisation (WHO) have agreed to start drafting a global agreement to prevent and tackle the next global pandemic.

At a briefing on Thursday, the director-general of the organisation, Dr Tedros Adhanom Ghebreyesus, described it as a “momentous day” and said “the significance of this decision cannot be overstated”.

He likened it to other such global agreements that have been made regarding tobacco control, nuclear and biological weapons, and climate change.

“This is a strong statement that health security is too important to be left to chance,” he said.

“The Covid-19 pandemic has shone a light on the many flaws in the global system to protect people from pandemics: the most vulnerable people going without vaccines; health workers without needed equipment to perform their life-saving work; and ‘me-first’ approaches that stymie the global solidarity needed to deal with a global threat,” he added.

This commitment to a global form of cooperation was echoed later in the day when the WHO censured countries for taking aim at SA for detecting, sequencing and announcing the discovery of the new variant now called Omicron.

The variant has been found in 23 countries, but a backlog of cases across the globe could reveal its presence in several more.

Ghebreyesus said at a press briefing: “It is deeply concerning to me that SA and Botswana are being penalised.”

He thanked the two countries for “detecting, sequencing and reporting so rapidly” on Omicron, and said a “blanket travel ban will not prevent the international spread of the virus and will place a heavy burden on livelihoods”.

“The ban has also hampered research by slowing down the transportation of samples around the globe for in-depth testing in labs,” he said.

Dr Soumya Swaminathan, chief scientist at WHO, said the detection of the new variant was a true “wake-up call to strengthen vaccinations, look at data, find gaps and really think about what we do with vaccines and how we get them into the arms of people who haven’t been vaccinated yet”.

While urgent research into Omicron is ongoing, scientists have confirmed the current vaccine regimens are still likely to prevent severe disease and death in the face of Omicron, and are also still crucial in the fight against Delta, still the dominant variant in many countries.

According to WHO technical lead on Covid-19 Maria van Kerkhove, scientists in SA “should be commended, and we need to strengthen our surveillance and sequencing around the world and have better geographic representation across the planet”.

She added: “We do not want to see countries being penalised for sharing information. A special thank you goes out to so many researchers across SA.”

According to Ghebreyesus: “The emergence of Omicron has captured global attention. Twenty-three countries have now reported cases, and we expect that number to grow. We are learning all the time about Omicron, but there is more to learn about transmission, and its impact on severity of disease.”

Kerkhove said since the variant was classified as a variant of concern “the timeline will change” as a backlog of cases is analysed.

She added: “It is absolutely critical to get vaccinated as vaccines are saving lives.”

Dr Michael Ryan, who leads the health emergencies programme at the WHO, said that “banning flights except for your own citizens makes no epidemiological sense”.

“A virus doesn’t know what country you’re a citizen of,” said Ryan.

He said countries with confirmed cases had faced no travel bans, yet others with no cases had seen bans and that showed the dire lack of logic in knee-jerk decisions.

He added: “Healthcare workers are sick of counting the dead and losing their friends.”

He said that the enduring crisis in Europe was still the Delta variant and that it was crucial for vaccine rollouts to continue unabated.

Are you Havana a laugh? Cocaine bust no worse than dodgy Covid pills