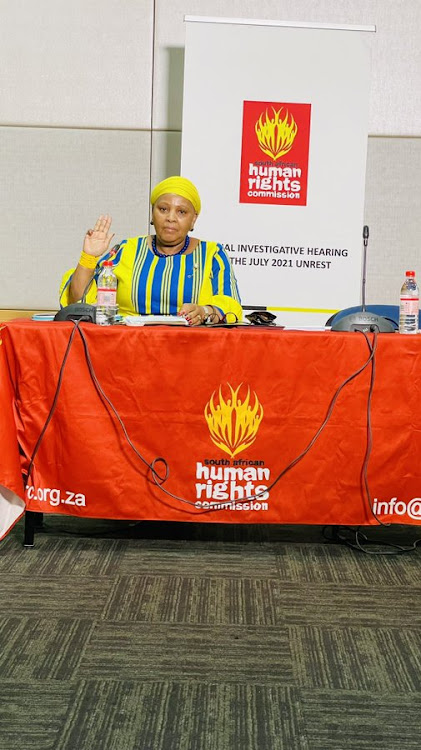 Mapisa-Nqakula, who is now national assembly speaker, was visibly riled when the evidence leader referenced her public contradiction of President Cyril Ramaphosa’s definition of the crisis as a “failed insurrection” that claimed more than 300 lives in the country.

Mapisa-Nqakula immediately asked whether it was relevant and questioned the mandate of the hearing, which began in Durban last Monday.

It is being held to investigate loss of life and the targeting of retail centres, schools, transport systems and hospitals, as well as how the unrest worsened inequality, poverty, hunger and food insecurity. Further, it is looking into reports that some members of communities who took to the streets used excessive force and racial profiling, as well as investigating arson, killings and rumours that the unrest was orchestrated. It is also probing the apparent lack of security forces — police and army — in intervening in the unrest.

The former minister shook her head, saying she was not on trial, that she had been maligned in the media for contradicting the president because she didn’t believe the unrest, which caused billions of rand in damage, was an incident of insurrection and that the evidence leader was “ruffling her feathers”.

Chairperson of the hearing Andre Gaum had to intervene and ask Mapisa-Nqakula to take a “deep breath”. He clarified that the political controversy around how the unrest was defined in public was important to the hearing.

She said: “The point is there was a lot of quibbling and negativity surrounding the terminology in defining what happened. I think that the manner in which it unfolded — I am not being evasive or running away. It is something I hate to go back to — the manner in which I was portrayed by some media to demonise me for contradicting [the] chief in command (CIC)/head of state. It was as if to say, who do you think you are, and that I was supportive of what was happening.”

At the time Mapisa-Nqakula briefed a portfolio committee hearing, where she said she believed the unrest was “counter-revolutionary creeping in the form of criminality and thuggery”.

“That’s how I felt because to date no one has been charged for treason. People have only been charged for looting or destruction or arson. My understanding is that once your workers mobilise against government, supported by armed forces, then you can start talking about insurrection.

“I can stand up and say with all pride that the defence force defended and suppressed what was happening at the time.”

Earlier in the day she dropped some bombshells when she told the commission that KwaZulu-Natal police commissioner Lt-Gen Nhlanhla Mkhwanazi went on paternity leave and that he and some of his generals were reluctant to share information with her and former minister of state security Ayanda Dlodlo during the unrest in KwaZulu-Natal.

She said egos had prevented information being shared between police and the defence force, which would have informed the deployment of soldiers.

However, she said she didn’t report Mkhwanazi’s behaviour because she was under the impression that minister of police Bheki Cele, who was present during the provincial commissioner’s “disrespectful” behaviour, acted on it.

She said she was more focused on the operation than reporting it to the president.

“To be honest, the three of us (ministers of police and state security and herself) were running around like headless chickens and realised that the situation could easily get out of hand.”

In her affidavit to the commission, Mapisa-Nqakula also highlighted “competition between the agencies for the CIC’s attention”, which needed to be resolved.

At the end of the hearing, she placed on record her unhappiness about a response from the commission after her legal representative notified it of a death in the family.

“The tone was of concern. It said: ‘While we pass on our condolences, we insist on you appearing before us on November 22’.”

Mapisa-Nqakula said she was initially scheduled to give evidence on November 24, but brought the date forward because it conflicted with other commitments, including a trip to Turkey. She said she was concerned the letter would be leaked to the media, creating the impression she was trying to evade appearing before the commission.

On events that took place in Phoenix, in the context of colonialism, Mapisa-Nqakula said the situation there was “so volatile that if we are not careful, we may see a repetition of what the people of this country experienced before”.

“The racial conflict that emerged in Phoenix ... SA can’t go back to that. The Phoenix conflict, massacre, because people died there, must be properly dealt with — it took so long to arrest people. We have to find a way of moving into that area [with] post-conflict initiatives. We didn’t deal with [it] properly, speedily. A lot can still be done.”

“Our socio-economic problems are going to take some time to remedy. It shouldn’t make us enemies. We need to find solutions and unite the ... haves and have nots. I think we can do better, do more as a society.”

Earlier, national police commissioner Gen Khehla Sitole said there were “quite a number of deaths” during the unrest. However, he could not confirm exactly how many people died.

Testifying before the commission, he said the death toll had not yet been finalised.

“What is delaying a final figure is the inquest process because of different time frames and as we were proceeding with the operations, the discovery of bodies happened at different times,” he said.

Sitole used the example of six bodies that had been found in a roof at a mall in Thembisa.

“The investigation is ongoing,” he said.

On July 22, then acting minister in the presidency Khumbudzo Ntshavheni said the death toll was 337.

At the time, she said 79 people died in Gauteng and that police opened 42 cases of murder and 37 inquest dockets.

In KwaZulu-Natal, 258 people died and the police are investigating 170 possible murders. Eighty-seven inquest dockets have been opened.

Sitole said he was not in KwaZulu-Natal, which was hardest hit, during the riots.

“During the occurrence we were all deployed and we had to attend to our command responsibilities. I was taking a bird’s-eye view, looking at the whole country. I attended to the movement of resources.”

He conceded that SA had an insufficient number of public order police officers.

He admitted police did not have the capacity to respond adequately, describing the situation as a “crisis of resources”.

The hearing continues on Tuesday.

‘We’re playing our political game’: DA scores as ANC is EFFed up in metros

If Ramaphosa’s playing a long game, he’s playing it all by himself