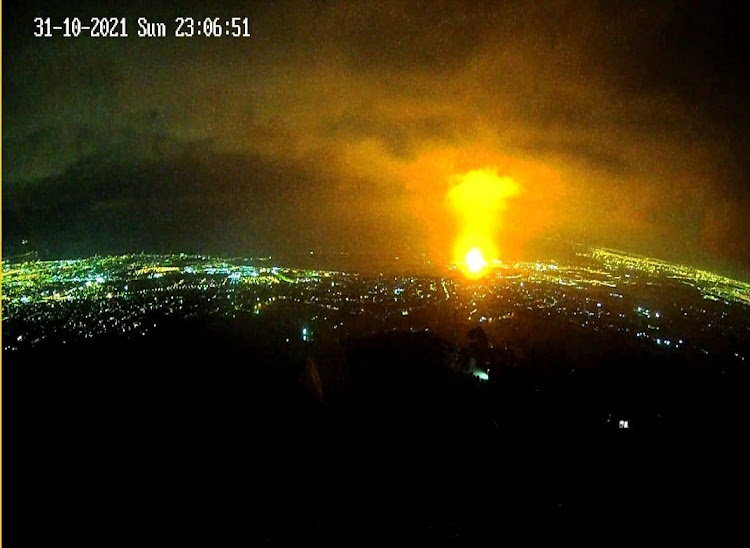 The residents of Macassar want to know what caused a spectacular fire at a munitions factory near Somerset West on Sunday night.

A fire broke out in the N86 magazine building at the Rheinmetall Denel Munition (RDM) site around 11pm and erupted into an apocalyptic fireball that left residents terrified and shaken.

While no injuries were reported, the fire was a grim reminder of an explosion in 2018 that left eight workers dead and led to calls for the factory to be closed.

A security camera captures the moment a fireball lights up the night sky at the Rheinmetall Denel Munitions factory in Somerset West on Sunday.
📸: Supplied pic.twitter.com/JDGveSq5UM

The company had launched an investigation into the fire, Rheinmetall spokesperson Ruby Maree told Sunday Times Daily, adding that this was required by law as the plant was classed as a national key point.

“We don’t know the cause. However, it was a fire and not an explosion,” said Maree.

The company refuted the suggestion that the fire had been caused during the disposal of old munitions.

“We cannot speculate on the cause of the fire before the investigation has concluded. However, we can confirm that no munitions are or have been destroyed in or around the N86 magazine building.”

According to its website, the company “specialises in the development, design and manufacture of large- and medium-calibre ammunition families and is a world leader in the field of artillery, mortar and infantry systems, as well as plant engineering”.

Macassar ward councillor Rhoda Ann Bazier called on government to revoke the company’s manufacturing licences and for the plant to be closed.

“We are going to take this to court,” she said.

It worries me. Explosions go off at night, there’s old ammunition there. It’s a time bomb waiting to go off.

Bazier said the issue had echoes of the long-running asbestos saga in Northern Cape and Limpopo, where former mineworkers and their families won compensation from mining companies after developing asbestos-related diseases.

Referring to a recent picket of community members outside the plant gates, Bazier said that was part of “the fight to stop Rheinmetall from building munitions for outside countries”.

The company responded, saying that it was “committed to being an ethical corporate citizen”.

This included being bound by export regulations.

Meanwhile, Baaitjies was not in favour of closing the plant.

“We must be allowed to elect the community representatives ,” said Baaitjies.

The company said it had a “long-standing, good relationship with them” but noted there had been “some debates” among the community members on who would represent them.

Meanwhile, said Baaitjies, it was the duty of the company to keep the community informed on issues such as munitions disposal and safety.

An investigation found that the fatal 2018 explosion was the result of a combination of human error and never-before-seen static electricity. The workers were blending propellant for use in artillery rounds when the explosion occurred.

A look back to 2011 shows how far ANC has fallen