For his entire voting life, Selby Dlamini has supported the ANC and he did so again on Monday 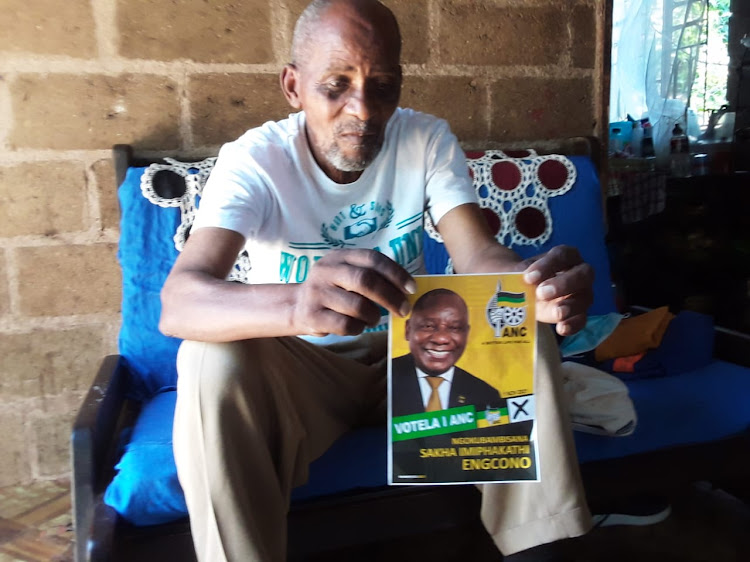 LOYALIST Selby Dlamini voted for the ANC on Monday, despite his wife having been killed in a politically motivated shooting.
Image: Sabelo Masuku

Despite losing his wife in a brutal drive-by shooting at an ANC nomination meeting in September, an Inanda man did not let his grief deter him from voting.

Selby Dlamini said he voted for the ANC at Nhlungwane hall, not far from his two-bedroom home in an informal settlement.

“I saw it fit that I should vote for the ruling party, which I have voted for all my life,” he said.

Dlamini added that he was still haunted by the events of September 11, when he witnessed his wife, Beatrice, and two other women being killed by unknown men.

“I remember my wife lying next to the other two women, who died in a pool of blood.”

The deceased were delegates at the meeting, at which four women and a man were also injured.

“Detectives have not had any luck in finding the culprits,” Dlamini said, adding that this had been difficult for his family.

However, his daughter, Nozipho, said she was not sure whether to vote.

The feedback we got from that meeting was that people are fearing for their lives and hence called for us to plead with the police to tighten security. As a result we have a strong police presence in all of our stations today.

“The loss of my mother has weighed heavily on me,” said the unemployed mother of two, adding that she was struggling to support her children.

“We have no job prospects. The only thing that we get is job promises from local leaders. Even after my mother was killed I was promised a job and nothing has come out of that,” said Nozipho.

Meanwhile, a steady stream of voters turned out to vote at the Nhlungwane hall, where there was a heavy police presence.

The ANC and EFF were strong contenders in the volatile ward, with ANC ward 54 treasurer and candidate Themba Mnguni upbeat that the ruling party would win the ward.

Mnguni said in the aftermath of the massacre the ANC had consulted with community members.

“The feedback we got from that meeting was that people are fearing for their lives and hence called for us to plead with the police to tighten security. As a result we have a strong police presence in all of our stations today,” he said.

Mzamo Dlamini, an independent candidate who defected from the ANC, said he had been sidelined by the party.

Desperate in Ditsobotla: some hope votes will count, others have given up