ANALYSIS | Cyril wants us to forgive and forget. Well, he’s made ...

ANALYSIS | Cyril wants us to forgive and forget. Well, he’s made his bed ...

On the campaign trail, the ANC president has stuck to the same script, even throwing in some humour 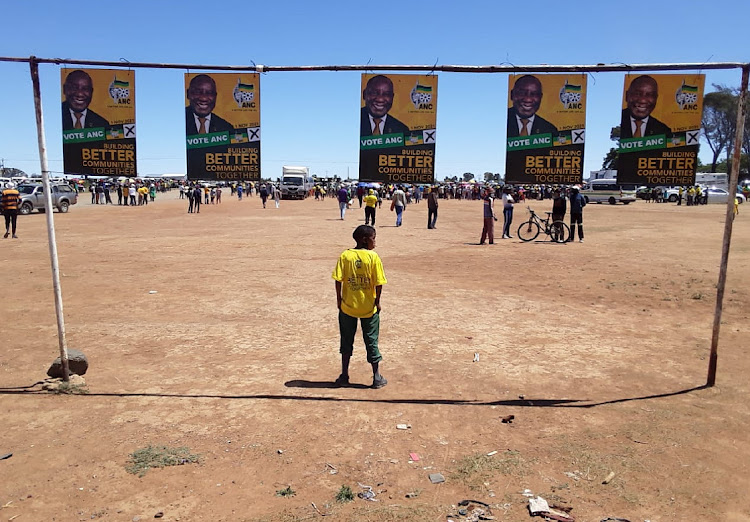 SOLID AS A ROCK A boy wearing an ANC T-shirt stands underneath posters bearing the face of party president Cyril Ramaphosa during a campaign rally in Mangaung on Monday.
Image: Ziphozonke Lushaba

But Ramaphosa stuck to the script he has delivered to all communities he has visited, regardless of whether their problems are unique or the same, starting with a “forgive and forget” message.

Forget how badly the ANC has failed you locally. Give it another shot at correcting its mistakes.

This has been Ramaphosa’s most prominent message to those living in ANC-run municipalities who are disgruntled about service delivery failures in their areas.

According to him, the disservice to communities is the result of an era of impunity and incompetence that was openly encouraged, supposedly under his predecessor as party boss, Jacob Zuma.

“In life, there is no one who is perfect and so is the ANC. When you are working, you are bound to make errors and we appeal for your forgiveness so we can make amends where we have erred.”

Ramaphosa put his head on the block, telling communities the typical self-serving ANC councillor is a thing of the past.

After the upcoming polls, he insisted, ANC councillors will serve in his image of anti-corruption and clean governance.

And he will make sure this happens, as he plans to meet all ANC councillors after the elections to preach good governance to them.

“We promise that once our candidates have been elected and are sworn in as councillors they will work for their communities and no one else,” he told the people of Bochabela, in Mangaung, on Monday.

“Gone are the days of councillors who steal public money for themselves, friends and families.

“There are no councillors who will be lazing around at municipal council chambers. They must be with the people that put them into office and give regular feedback on exactly what they have achieved.”

The time for dressing to kill by ANC councillors will be no more, Ramaphosa promised, as the post-November 1 councillors will have to get their hands dirty and be on call to troubleshoot problems.

Regarding gender balance and generational mix, occasionally sources of division within the party and its representatives in the state, Ramaphosa boasted about progress made.

He told communities that 25% of the ANC’s candidates are under 35 years of age, while 46% are women.

Diversification, he said, will go a long way in tilting stereotypes that women and young people cannot lead.

Capitalising on high unemployment, Ramaphosa has crowed that it is the ANC government that intervened with the grant for unemployed people to shield them from the impact of Covid-19.

He told communities that the first time around 6-million people applied for it, with 4-million receiving the grant.

In the ongoing window, 12-million people had put in requests, with 7-million approved.

“The remaining 5-million may also get it. We are busy with verification processes.”

Ramaphosa has not missed a chance to pour cold water on disinformation about Covid-19 vaccines, throwing in some humour in the process.

“There are those among us, and some of them are pastors, who say vaccines do not help and that they kill people.

“These fake news peddlers go on to say that it sterilises women and that it affects male performance in bed. All such claims are falsehoods,” he said.

“I am vaccinated and there are no problems at home in the bedroom and I have not died. Right here in front of you is proof that vaccines are safe.”

Poll chancers: politicians who make false promises must be punished