I realised my life would probably end: German describes Jozini ...

Alexander Mirschel, whose father drowned during a houseboat fire, has told Samsa about the harrowing incident 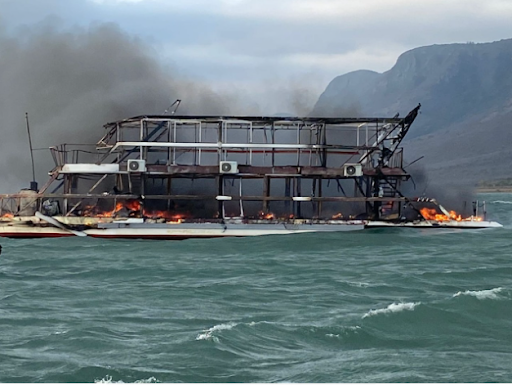 GUTTED The fire on the Shayamanzi I started at about 4.30pm on Saturday.
Image: Supplied

German tourist Alexander Mirschel thought he was going to die and helplessly watched  as his father struggled in the water before losing his life on Lake Jozini, in what should have been a dream KwaZulu-Natal holiday.

In a graphic account of what transpired after a fire broke out on a Shayamanzi luxury houseboat on Saturday, the holidaymaker told the South African Maritime Safety Authority​ (Samsa) that at one point he realised his life would probably end on the lake near Pongola.

He detailed in a letter seen by Sunday Times Daily how he, his father, brother, friends and crew members were forced to jump ship.

“As part of the main boat started to explode, we all tried to swim quickly away, but the current was very strong. Maxwell (a crew member) drifted away to the centre of the lake, but we could not help. My father was panicking and struggling to get breath.

“As I reached my father he was still alive, but under huge shock. He said he cannot hold himself over water, so I tried to assist, but had to hold my own life jacket in order to not drown. I quickly ran out of power and cried [to] my friends [Robert and Shahsad] for help, while my brother [Mario] struggled 100m away and went underwater for some seconds. I was separated from my father and pushed by the waves further out.

“Robert and Shahsad reached my father when I was struggling and realised my own life will probably end today. I turned to the back, trying to get some breath and energy back, and somehow found the strength to fight towards the shore. When I arrived, the other four of us were close by, but my father was dead already. We tried to resuscitate [him] for minutes, but it was too late. The waves pushed ourselves into the rocks and we dragged the dead body upon the hill, waiting for help,” he said in the letter.

With the one cellphone that was still working, Mirschel called for help.

“Some fishing boats and tender boats from the other houseboat arrived, but they could not get close to the rocky shore so we needed to get to another flat area, climbing over the rocks and dragging our father’s body to get on one of the boats.”

Mirschel’s father, Michael, and a crew member died, while another crew member is missing.

Mirschel said they boarded the boat on Friday.

On Saturday they enjoyed themselves on the main boat, “while it was perfect summerly weather, with 32 degrees celsius and sunshine”.

“We had lunch around 13.25pm and then wanted to have some rest. One of the crew members knocked on our doors around 14.15pm to inform us that [there] are elephants on the shore and we could go for game-viewing. Three of us, Shahsad, my brother Mario and myself, agreed. My father Michael and Robert stayed on the main boat. The three of us enjoyed some good 30 mins with the elephants some 5km away from the main boat. Then the wind picked up and the weather changed quickly. Maxwell, the crew member in charge of our tender boat, told us: ‘We were expecting a storm this afternoon, better let’s head back to the houseboat.’

“We made our way to the main boat that was still running, but the conditions were not safe to get from the tender boat to the main boat, so we decided to face the waves and head towards a sheltered bay some good kilometre ahead. We fought the waves and reached the bay, but when we turned around the main boat was quite far behind us and showed some black smoke. I forced Maxwell to rush back to see the situation and help. He panicked and stopped the engine, trying to make a call, but then continued forwards to the main boat, where the flames already looked terrifying.

“I threw my cameras over board to get the lift jackets under the seat. I hoped that everyone from the main boat was already in the water, but obviously they saw the smoke too late and were just standing at the front tip of the boat as we approached. There was no fire alarm sound noticeable. I shouted that they need to jump as they all did, except for the chef.”

Mirschel hopes an insurer will cover the damages and losses, as well as assist in repatriating his father’s body.

“But so far there was no support from any insurance whatsoever, so we fight on our own to get everything sorted out in order to get substitute passports, some cash and the paperwork done to find our way back to Germany,” he said.

In his letter to Samsa, Mirschel also outlined his evaluation and experience of the condition of Shayamanzi and its emergency protocols.

Samsa is investigating the tragedy.

‘He deserves a good rest’: Mogoeng led judiciary safely through the storm