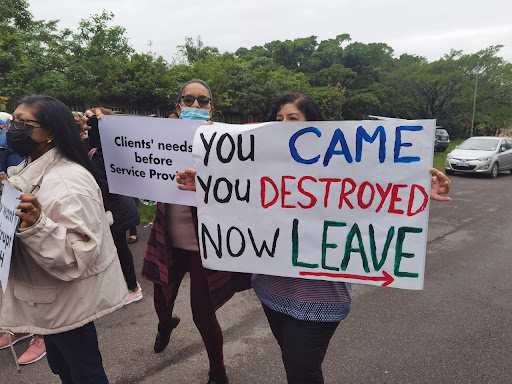 UP IN ARMS Staff protest about maladministration outside Durban and Coastal Mental Health headquarters.
Image: Supplied

Durban and Coastal Mental Health (DCMH), which interfaces with 600,000 mentally ill patients a year, was “captured” when it was taken over by a new board in 2019. Under the chairpersonship of a disbarred lawyer, it was “brought to its knees”, incurring debt of more than R18m in just two years.

This is the finding of an independent investigating team, chaired by adv Thulani Phewa, who was appointed by the head of health in KwaZulu-Natal to probe allegations of “malfeasance” emanating from whistleblowers and media reports.

This followed reports of a looming mental healthcare crisis, similar to that of Life Esidimeni, in the province.

In its report dated September 15, the team recommended the NPO be urgently placed under the supervision of an administrator, the board be dissolved, high ranking officials disciplined, criminal charges laid against them and other board members, and steps taken to recover any squandered money.

However, it appears no action has been taken yet.

The departments of health and social development did not respond to numerous requests for comment.

And this week, staffers at DCMH headquarters in Sherwood held a protest, demanding action be taken.

They reportedly chased senior management from the premises.

Last year, TimesLIVE reported that DCMH, the province’s oldest and largest NPO, was teetering on the edge of bankruptcy for the first time in its 80-year history. This after the “takeover” of the board under the chairmanship of former attorney Sipho Shezi, who was disbarred in 2001 for misappropriation of funds.

Then, earlier this year, TimesLIVE reported that residents at its Sherwood facility were facing starvation after a catering company walked off site and residents were lying in urine-stained beds.

This prompted an unannounced visit by social development MEC Nonhlanhla Khoza, who said it was clear there had been mismanagement and misappropriation of funds, and vowed to take action.

In March, Shezi was ousted as chairperson, though he said he resigned, and replaced by Sthandiwe Mkhize, who accused him of  “misconduct”.

Phewa confirmed he had chaired the team and that the report was presented to the provincial health department on September 15.

The report alleges a historic relationship between Shezi and Victor Lungisani Mthiyane, whom he met at school and who was a junior social worker at the organisation until Shezi was appointed CEO “through a rigged process” after unseating “Indians” who previously occupied senior positions in what Shezi said was a “transformation agenda”.

Shezi then handpicked someone to drive finances, ousting the woman who had done the job for decades.

He also created a chief financial officer position (CFO), hiring a man, the report says, who had previously been brought in to do a forensic audit he never completed.

The man also played a role in drafting the advert for the job.

What emerged during the investigation was that during Shezi’s reign, two companies were created, with fictitious addresses, which purported to transfer all the NPO’s assets to them as directors, including Shezi, Mthiyane, other senior officials and board members.

Though not detailed in the report, one of the addresses listed is a luxury four-bedroom house in Izinga Estate, which was on sale for more than R7.6m.

“On the final day of our interview with Mthiyane, he confessed ... and said he was excited at the prospect of owning a company and that the title and position made him want to be a young businessman,” the report said.

“Another staff member confirmed the existence of the company and that its assets were those of DCMH. The team strongly believes that their intentions were to unlawfully gain control of the assets for their private benefits.

“This, in my respectful opinion, is what I term DCMH capture,” said Phewa.

“It is clear to me that the so-called transformation agenda was a ticket to ride the gravy train and make easy money,” he added, noting that at the time the NGO was financially distressed, board members were paid R15,000 each, apparently for their “dedication”.

The report said the departments of health and social development, which provide funding to the organisation, must assess the validity of the decisions taken by the Shezi board, particularly those which created the costly positions of CEO, COO (chief operations officer) and CFO, and, going forward, department representatives must attend board meetings.

It states there was strong evidence of favouritism and nepotism, and a pattern of intimidation and victimisation of staff who stood up against the new board.

DCMH is now drowning in debt. User care, treatment and rehabilitation have been compromised due to misappropriation of funds, gross mismanagement and poor and/or complete lack of proper clinical policies and protocols.

This, and the revolving door of suppliers because of “reckless decisions” by officials, led to litigation against the NPO.

The report says none of the service providers engaged from 2019 were enlisted in an open, transparent, fair and competitive manner, or entered into valid agreements or contracts.

Termination of existing service providers was abrupt and done on short notice, and new ones were brought in after “urgent calls” from board members or senior officials.

In some instances, they were paid without providing invoices.

“Certain board members improperly benefited from the service providers appointed,” it says.

And it was clear these services were too expensive and the NPO owed more than R8m to eight companies which provided catering, care and cleaning, nursing and security services.

The lack of audited financial statements was the reason traditional funders, such as the Community Chest, withdrew support.

As a result, residents were suffering.

There was no infection prevention and control, Covid-19 protocols were not being strictly adhered to and the quality of food was poor.

“DCMH is now drowning in debt. User care, treatment and rehabilitation have been compromised due to misappropriation of funds, gross mismanagement and poor and/or complete lack of proper clinical policies and protocols,” the report says.

Mthiyane and Shezi were interviewed by the investigating team.

Mthiyane said he had not seen the report and could not comment, in spite of detailed questions sent to him.

Shezi said he had also not seen the report and believed it had been “leaked” to tarnish his name.

He said he had answered all the allegations when interviewed, denied them all and, if necessary, would challenge the findings in court.

On the issue of his disbarment, he said he had never hidden the fact, stating that it “did not define me or make me a dishonest person”.

As chairperson he had no direct control over the finances of the NPO and was “just one man”, who did not control the other board members.

He said prior to the new board taking over, the NPO was “controlled by Indians”, but no one was chased out.

Some implicated in wrongdoing were disciplined and dismissed.

“When we came in, the organisation was already in financial chaos ... no one has ever taken issue with that.

“We prioritised security and nursing care in the interests of residents, but I concede we did not have the budget for it.”

He denied having a long-time relationship with Mthiyane, saying he was hired after due process. About 10 other people were also interviewed and he scored the highest points.

“I believed he was qualified for the job. But he has not lived up to expectation and I raised this with the board before I resigned.”

Shezi said the two companies of which he and others were directors were set up on advice from a development financial body so the NPO could apply for loans.

“I agreed to this, as long as it would help ... at the time, the service users didn’t have food. I was troubled ... it was short-sighted, but it was a solution at the time. But they (the companies) have never been active. We never followed up.”

He denied the board was incompetent, but said “people did not understand their roles”.

“Some worked hard ... but there were issues with funding. For example, the department of health only provides R22 a day for each service provider ... it’s just too little.

“I will admit where I was wrong, but will defend taking the right decisions at the right time.”

This week, Mkhize, the present chairperson, labelled Tuesday’s staff protest against mismanagement and “corruption” as an illegal strike.

He said Mthiyane’s position was “reviewed” and while COO Zola Ngidi was suspended, this was overturned in court.

He said in the past six months there had been significant progress. The board had embarked on cost-cutting, reducing spending on outsourcing, appointing external auditors and working with the health department to improve service user diets.

Do not show your face at a football game if you’re not vaxxed: Safa

Make a plan, Joburg, or you’ll become an illegal building site with no gold