‘Unrepentant’ wife killer Jason Rohde gets no mercy from appeal ...

Harsh sentencing reflects the fact that he has taken no responsibility for his crimes, rules SCA 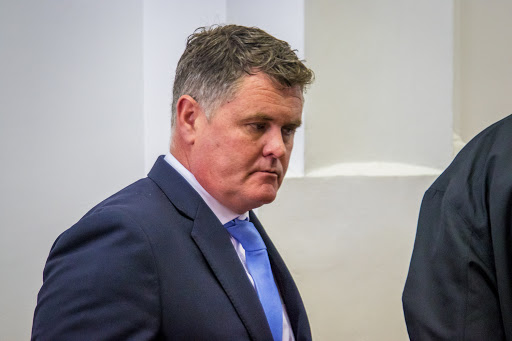 NO REMORSE Jason Rohde has seven days to report to the nearest correctional centre to start his 15-year prison sentence.
Image: Anthony Molyneaux

During Tuesday’s sentencing after his failed bid to overturn his conviction, the Supreme Court of Appeal (SCA) said the former Lew Geffen Sotheby’s CEO had not taken responsibility for his crimes.

Rohde killed his wife, Susan, with whom he has three daughters, in a room they shared at Spier, near Stellenbosch, in July 2016.

Though the SCA reduced the sentence imposed by Cape Town high court judge Gaayat Salie-Hlophe, Rohde will spend a lengthy time in jail.

In the 31-page judgment, the SCA said violence against women and children had increased.

The court considered that Rohde was 47 when he committed the crime, had three adult daughters and that he was a first-time offender. It also noted he had “been a successful businessman and is capable of making a valuable contribution to society”.

“However, [he] committed a very serious crime,” the judgment read.

“He murdered his wife in a brutal and callous manner. The deceased’s death must be devastating to her daughters and those who loved her. Regrettably violence against women and children has become a pervasive phenomenon internationally and [in] this country in recent times.

“The sentence of this court must reflect the abhorrence of society with regard to violence against women. Furthermore, it is very important to bear in mind that [Rohde] is unrepentant and takes no responsibility for his crimes.”

Salie-Hlophe found that Rohde “executed a sustained assault on the deceased that included hitting her with his fist, repeatedly smothering her and applying such force to her chest that she suffered rib fractures and lung contusions”. But the SCA said “these findings do not withstand scrutiny”.

“[Rohde] must be sentenced on count one [murder] on the basis that he unlawfully and intentionally killed the deceased by manual strangulation but did not assault her in any other way.”

Salie-Hlophe sentenced Rohde to an effective 20 years behind bars. The SCA decided to “consider the sentence afresh”. It found no “substantial and compelling circumstances that justify a departure from the prescribed sentence of 15 years’ imprisonment’ for murder”.

Rohde probably rues the day he started an extramarital affair in 2015. The judgment detailed his affair with his former colleague Jolene Alterskye — which seems to have contributed to his undoing.

“This [the affair] was revealed to the deceased on 28 February 2016, when she discovered a card that Ms Alterskye had left for [Rohde] in his luggage. True to her character, the deceased immediately confronted [Rohde].”

“On the instructions of the deceased he called Ms Alterskye there and then, with his cellphone on speaker, and called off the affair,” the judgment read. “Nevertheless, as could be expected, [Rohde’s] affair had profound effect on the deceased’s emotional state and on the state of their matrimonial relationship.”

The couple underwent counselling, but while Rohde “rekindled the love affair” Susan insisted on joining him when he attended a work conference at Spier.

“The deceased was anxious when [Rohde] travelled to Cape Town for his work,” the judgment read.

“She did not tell her family or friends about the affair lest [Rohde] would be held responsible or disliked. All their friends saw them as a perfect couple. There was no one to talk to about what was happening to her emotionally. This was distressing as she was trying to deal with her problems on her own.”

But Rohde still found time for Alterskye at Spier.

“Whilst the deceased was undressing he went into the bathroom and began to type a message to Ms Alterskye on his cellphone,” the judgment reads.

“The deceased became aware thereof. The deceased was enraged. He retaliated verbally, and wanted to leave the suite. The deceased attempted to physically prevent him from leaving the room. They physically grabbed at and pushed each other. To get her out of his way, [Rohde] grabbed the deceased by the neck and shoved her. During the altercation she was also struck on the side of her face by the soft part of his forearm. He insisted that the deceased had not been injured by these actions at all.”

“The deceased followed him. She was wearing a white towelling gown and no shoes. He got to the room where the after-party was being held and sat on the bed opposite Ms Alterskye. The deceased stood in the doorway telling him to leave the room. He was embarrassed and was afraid that there would be an altercation between Ms Alterskye and the deceased. He got up and left the room,” the judgment reads.

“On the way to their room, the deceased grabbed him from behind. He swung his arm back and hit her on the nose with his elbow. Her nose did not bleed. On the way the deceased also fell between a small ledge and a flowerbed and cut her toe. In the hotel room the deceased complained about her bleeding toe. He also noticed a graze on her left eyebrow. He undressed and got into the bed. He told the deceased that they were ‘finished’. She continued to rant, calling him an adulterer and a cheat.”

Susan was found dead with a hair iron cord around her neck behind a locked bathroom door.

Rohde has seven days to report to the nearest correctional centre to start his 15-year prison sentence.