A showdown is looming between the two, with the party saying if the city removes its banners it will go to court 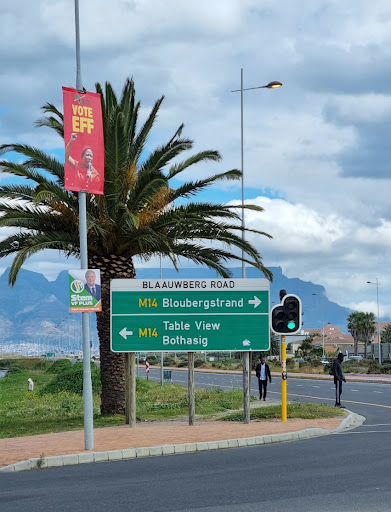 OFFENDING BANNER The City of Cape Town has demanded the EFF remove some of its elections banners, saying they flout bylaws and regulations.
Image: Twitter via @EFF_Cape_Metro

The City of Cape Town has given the EFF until the end of business on Tuesday to remove banners that were erected on street light poles, allegedly against the rules

The city has accused the party of not complying with approved election regulations and bylaws by erecting banners instead of posters.

In response, the EFF has threatened legal action if the city removes the election paraphernalia or does not retract the notice to remove the banners.

Besides normal election posters, the EFF has erected banners featuring party leader Julius Malema’s face, with the words “Vote EFF”, on light poles around the city. The banners are on canvas and appear to be about double the size of typical posters.

“The approved election rules that are distributed each year to all political parties specifically provide for posters to be erected during the election period and not banners ... To date all political parties have been abiding by these rules,” reads an email from the city’s chief environmental control officer, Debbie Evans, which was sent on Monday.

The approved election rules that are distributed each year to all political parties specifically provide for posters to be erected during the election period and not banners.

The email to EFF leaders came a day after the party missed a deadline set by the city to take down the banners.

She cited Schedule 10 of the Outdoor Advertising and Signage By-law, which relates to the display of banners in Cape Town, saying these are only permitted for functions or events, not electioneering purposes.

She said the official poster rules for electioneering are the only means of advertising allowed on city light poles. No payment is required and scenic routes are also opened up for this.

Evans suggested the EFF is a repeat offender in this regard and that in 2016 the party, after being told to remove unauthorised banners, did not do so.

“Accordingly, your current banner, at the entrance to the Waterfront, is unauthorised and is to be removed by the latest tomorrow [Tuesday] by 5pm, failing which the city’s contractor will remove such banner,” said Evans.

The city first informed the EFF of the alleged breach on Friday, when its operations manager for urban management, Catherine Overmeyer, who is also the IEC’s deputy municipal electoral officer, wrote that an EFF banner had been sighted close to the V&A Waterfront. She said this was in contravention of city poster rules that were circulated to political parties.

Overmeyer told the party to remove the banner and “any other of your party’s banners erected elsewhere in the city” before October 3.

In response, the EFF’s Godrich Gardee said: “I have told you that should you dare remove those banners, EFF will approach court on urgent basis on a Sunday and those cost would be punitive and personal to you and any other official you would have instructed to remove the banners.

“You are advised to retract your unlawful notice of removal of EFF banners, failure which, should the banners be removed, a further criminal case would be opened against you and those who would have carried out your illegal instructions,” said Gardee.

He also said Overmeyer informed the party its banners should be paid for. This, he said, is not in the bylaws or the circular in the party’s possession.

Gardee also argued that while the EFF erected similar banners in 2016, no similar action was taken by the city.

Police brutality or choking incident? What led to man’s death in custody?

LISTEN | ‘His plan to kill me didn’t succeed’: how woman survived brutal ...