Zuma at Nkandla but not his ‘charming, ever-laughing self’

Zuma at Nkandla but not his ‘charming, ever-laughing self’ 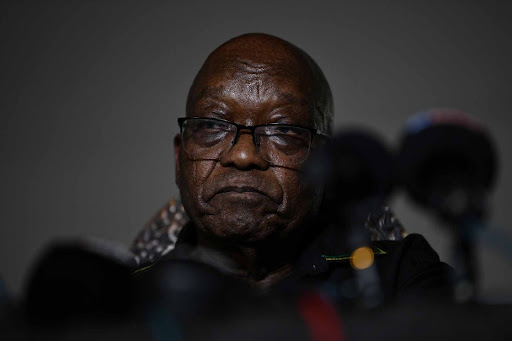 Former president Jacob Zuma's family is happy he has returned to his Nkandla homestead to serve the remainder of his 15-month prison sentence after being granted medical parole. File photo.
Image: Lulama Zenzile

Grand plans to celebrate the return of former president Jacob Zuma to his Nkandla home in kwaDakwadunuse have been placed on hold because he is apparently unwell after being discharged from a Johannesburg hospital on Wednesday night.

Since the news that Zuma had been released on medical parole by correctional services boss Arthur Fraser made headlines, family, friends and relatives had planned a hero’s welcome for the former president.

Sunday Times Daily understands that these plans included a prayer and the slaughter of bulls to celebrate and thank the ancestors for his safe return. But the family now say they are concerned about his health. Since returning home three days ago, Zuma has not been his usual jolly self.

Zuma’s brother Khanya said: “We are with him, it’s been really pleasant. Last night we were with him until late at night. Iyaphila insizwa, bamubuyise njongoba [The man is OK, they returned him in perfect condition].”

Khanya said Zuma has been unwell since he was “poisoned” in 2014 and that was the case even before he was admitted to hospital. The Sunday Times reported previously that Zuma travelled to Russia to confirm the diagnosis and undergo treatment.

The 79-year-old former head of state was admitted to a hospital for medical observation on September 6. The department of correctional services announced earlier this month that he was being placed on medical parole because of ill health.

The announcement came 58 days after he was admitted as an inmate at the Estcourt Correctional Services facility. Zuma started serving his sentence in July after being found guilty of contempt of court for failure to comply with an order of the Constitutional Court to honour a summons to appear before the state capture inquiry.

He was sentenced to 15 months behind bars and spent several weeks of his incarceration in the medical wing of the prison before he was moved to an outside hospital for further treatment.

Zuma’s return has been kept low-key to avoid any fanfare. However Khanya said Zuma “was not 100% even before he was taken away”.

He said the family was happy to have Zuma back home. “He is really happy to see the children. Uyabona lensizwa inesibindi, into yakhe le, umasixoxa naye uyabona ukuthi into angenandabanayo le. He knows that he is in it for the long haul and will die in it.

“To be honest, we are more worried about him than he is about himself. Even his wife [Sizakele] maKhumalo was extremely happy to see him.” he said

He added that “the family is still discussing how happy we are to have him back. We are not planning a big celebration yet but people have started flocking to the house.

“They want to come and see him. It’s everyone - family, neighbours, relatives and his people. My brother is loved worldwide. There are cars parked outside waiting to see him.”

One of Zuma's nephews, who lives inside the compound and asked not to be named, said: “Yes, he is home but he is not well. Yazi, even when you look at him, he is not the charming and ever-laughing JZ who is full of jokes.”

Zuma’s nephew Inkosi Simphiwe Zuma of the kwaNxamalala Tribal Authority said there was nothing to celebrate.

“Though he’s not 100% OK, we have hope that he will recover fully. He is old, remember that and there was a little remainder of the poison he was given back in 2014, so he really has not been well.

“He went to Cuba to see the doctors and the courts did not believe that he was unwell. We are happy he is home but we will not be celebrating when justice has not been served. There is no need to celebrate his return, yet.”

They died in vain: little has changed since 2018 Bank of Lisbon blaze