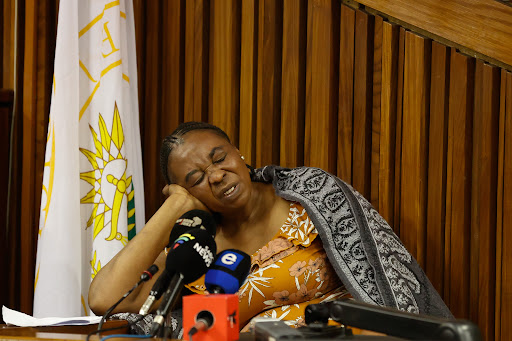 NOT WELL Murder accused former police officer Nomia Rosemary Ndlovu's case was postponed due to her not feeling well. Ndlovu complained about being dizzy and having swollen feet.
Image: Thulani Mbele

That is how much alleged killer cop Nomia Rosemary Ndlovu had in her account the day her boyfriend and the father of her child, Maurice Mabasa, was stabbed to death.

But four days later, that amount had ballooned to more than R120,000 in funeral and life policy payouts on which she was listed as the beneficiary.

Ndlovu is accused of killing Mabasa to cash in on his funeral policies. He is one of six people, including Ndlovu’s sister, cousin, niece and nephews, who have died, allegedly so she could pocket the insurance cash. Ndlovu, who was based at the Tembisa South police station, is also accused of plotting the murders of several other relatives, including her mother, sister and her sister’s children.

She was nabbed in March 2018 after a man she allegedly hired to burn her sister and five children alive in their Bushbuckridge home turned to the police, setting the wheels in motion for her to be caught. It was during this undercover operation that Ndlovu was caught on camera, detailing how she wanted the family of six to be burnt alive so she could cash in on insurance policies she had opened in her sister’s name. She could be heard in the video clip saying the children needed to be killed as well so no witnesses were left behind.

On Monday, Ndlovu’s financial status came under the spotlight.

While she had told the court that she was earning about R14,000 or R15,000, based on whether she worked weekends, night shifts or public holidays, the court found that during that month, the salary that was deposited into her account was R7,088.

Prosecutor Riana Williams asked: “This was one hell of a payout for someone who no longer stayed with you.”

She was referring to evidence that her and Mabasa’s relationship was “rocky” in the weeks leading up to his death, with Mabasa at times sleeping in his car to avoid going home. 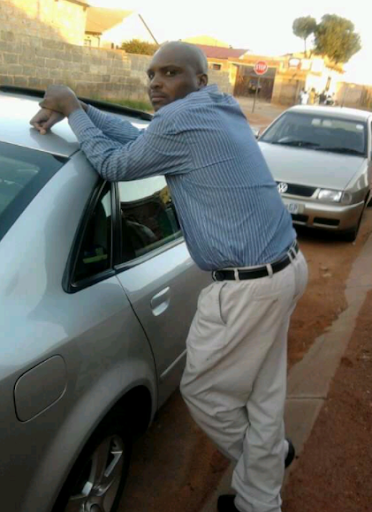 STABBED TO DEATH Maurice Mabasa was in a relationship with alleged killer cop Nomia Rosemary Ndlovu when he was murdered in October 2015.
Image: File

“I was living with him from 2012 until he died. It’s the first time that I hear that I was no longer staying with him,’ Ndlovu said.

“I never had problems with Maurice,” she added.

She disputed that Justice Mabasa, Maurice’s brother, had insinuated this.

“Justice told the court that Maurice had not yet paid lobola, but he never mentioned that we were no longer staying together,” she stressed.

“What I heard Ms Williams say is that she wanted to know how I got money for someone that I was no longer staying with. After his death, his brother Justice came to my place every day, as well as his family. Everything that was to be done for the funeral was done by me, even the family of the deceased acknowledged me and gave me the respect as his wife. I was the chief mourner and according to custom I was given a mattress to mourn at his home. Why would this have happened if I was not seen as his family?” asked Ndlovu.

“The day after the funeral, my family and I wanted to leave the deceased’s home, but his family refused. My family said this could not happen because he had not paid lobola for me, but they insisted and we washed the laundry as done according to customs followed after a funeral. I was given a black doek to wear as a sign of mourning,” she added.

Mabasa, a US Embassy employee, was found dead outside a residence in Olifantsfontein in October 2015. He had been stabbed almost 80 times.

But well after his death, Ndlovu continued to receive payouts.

“You also received maintenance in respect of your child?” Williams asked.

“Yes. There was a trust account that was opened and the child got R750 each month until the child’s death,” Ndlovu said.

She maintained she footed the bill for everything for Mabasa’s funeral, saying she even paid to have his body moved to his home. 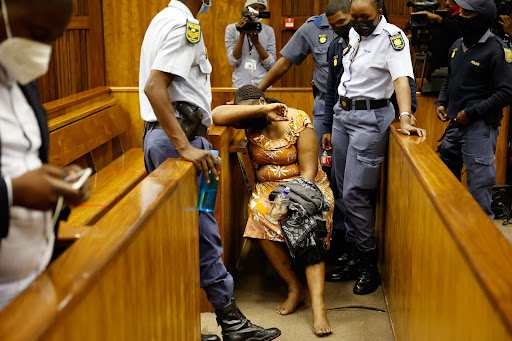 ALL TOO MUCH Former police officer Nomia Rosemary Ndlovu's case was postponed after she complained about being dizzy and having swollen feet.
Image: Thulani Mbele

Zooming in on the injuries Mabasa sustained, Williams said: “Somebody had to be very angry to have caused him so many injuries.”

Mabasa had been stabbed everywhere  - the neck, lungs, chest and stomach — but Ndlovu insisted she did not know who could have been behind his killing.

“I don’t know what happened, I was not there. I never even saw the body, which is why I also did not want to see the pictures of his body here in court,” she said.

Instead, she broke down in tears as she was directed to go through the contents of Mabasa’s wallet.

Williams wanted to highlight that Mabasa was not killed in a robbery gone wrong because his wallet still had R300 in it when his body was found.

But it was what was missing from the wallet that the state zoomed in on.

The officer told her they had found a body, with a wallet that had cards in it. They believed the body was that of Mabasa.

But Williams highlighted that there was nothing in the wallet that could have led the police to Ndlovu. Her name or number was not on any of the bank cards in his wallet.

But Ndlovu said she had no idea how the officer had found her number. She said the officer’s husband had attended a stokvel with Mabasa and because of this may have known she was Mabasa’s lover.

She further stated that Mabasa was quite popular in the area and the officers could have immediately identified him.

Mugwari, who testified as a state witness, however, denied Ndlovu’s version of events.

She said Ndlovu had arrived at the police station about 6am, saying she was there to open a missing person’s case.

Mugwari said she sent Ndlovu back, saying they could assist her if she brought a picture with her. Ndlovu said she could rush home, but shortly after leaving the charge office she was heard screaming that “they had killed her husband”.

Officers then comforted her.

At this point, Williams said, police officers coming into the station with an evidence bag containing Mabasa’s wallet had not opened it, so there was no way they would have linked her to him.

But Ndlovu stuck to her story.

The agent had testified before the court and when shown a picture of Mabasa, insisted that this was not the man whom he had met at Ndlovu’s home that day.

Also under the spotlight during proceedings were life insurance policies opened in Mabasa’s name, particularly one from Assupol, an agent of which had come to the house to assist Mabasa in opening it.

When shown a picture of Mabasa during his testimony, the agent insisted he was not the man he had met at Ndlovu’s home that day.

A handwriting expert, who testified during the trial, also suggested the signature on the policy was different or forged.

Another insurance official, Dicks Mkhatshwa, testified that they had received a call from Ndlovu two weeks before Mabasa’s death inquiring whether his policies were up to date.

“I never made such an inquiry. Maurice had asked to use my phone because I had airtime and he did not,” Ndlovu retorted.

“Had you dreamed that Maurice would die?” Williams quizzed.

“I did not initiate it. Maurice asked me to call Mkhatshwa for him because he wanted to find out whether the policy was in good standing because he was paid fortnightly and when the debit order came off at the end of the month, it sometimes found that there was no money in the account,” Ndlovu answered.

She maintained Mkhatshwa did not divulge any information to her, saying he needed to speak to the policy holder.

“He asked if Mabasa was there and I said yes and I handed the phone to Mabasa for him to answer,” said Ndlovu.

At that point it was found that Mabasa’s policy was not up to date and the phone was handed back to Ndlovu, who told Mkhatshwa she would make payments herself.

‘Client’ among those accused of kidnapping KZN businessman