‘He was lucky’: foreman who tumbled from helicopter is back on ...

‘He was lucky’: foreman who tumbled from helicopter is back on his feet

‘Johnny Walker’ fell 15m to the ground and was left with a torn aorta, broken leg, crushed foot and broken wrist 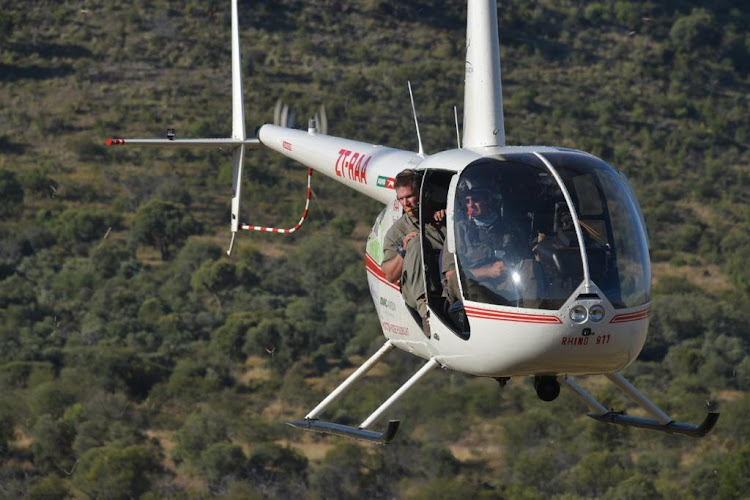 Robinson helicopters, one of which is seen here on an anti-poaching patrol in North West, are widely used in game capture work with one person flying and the other darting the animals with a specially adapted rifle that fires darts.
Image: Rhino 911

A farm foreman who fell from an airborne helicopter while darting buffalo in June is back at work as he recovers from his near-death experience in the Free State.

Johnny Moore, 46, foreman at Be Human, a luxury farm hotel and animal ranch at Middelwater, near Bloemfontein, fell 15m from the helicopter after his safety harness accidentally unclipped.

Moore and the helicopter pilot had been involved in a routine game counting exercise when they saw a buffalo cow with small calves who appeared to be in bad shape.

They decided the animals needed to be darted with anti-parasite medication and the pilot landed to allow Moore to retrieve the dart gun.

Darting animals from a low-flying helicopter is technically demanding work, requiring the person with the dart gun to have one foot on a landing skid as they lean out of the aircraft to get a good shot.

According to aviation law, the gunner must also have a safety harness or belt linked to the helicopter.

Moore darted one buffalo, then turned to take aim at another.

“The pilot heard a ‘click’,” said Strydom, adding that Moore tumbled from the chopper at the same moment.

As it was midwinter, Moore was wearing a bulky jacket which may have snagged the quick-release buckle on the safety harness, said Strydom.

The foreman fell to the ground, tearing his aorta, the large blood vessel attached to the heart, as well as breaking multiple bones.

Paramedics transported him to Rosepark Hospital in Bloemfontein, where he underwent emergency surgery.

His other injuries included a broken leg, a crushed foot and a broken wrist.

“The bones are growing back nicely,” said Strydom, adding Moore had returned to work on the farm.

“We’re calling him Johnny Walker,” said Strydom, on account of Moore being barred from flying for the time being. “It’s that South African thing. First you cry about it then make a joke about it.”

Moore joins an elite club of people who have survived falls from aircraft, albeit from a dramatically lower altitude.

On Christmas Eve 1971, 17-year-old Juliane Koepcke survived a 3,000m plunge into the Peruvian rainforest after the Lockheed Electra airliner she was travelling in broke into pieces after flying into a thunderstorm.

Koepcke regained consciousness still strapped to her seat, surrounded by aircraft debris and the bodies of passengers, including her mother. Other than a broken collarbone and a gash over one eye, she was unharmed.

Using survival techniques and jungle lore that she had learnt at her parents’ biological research station in the Amazon rainforest, for the next 11 days Koepcke made her way to safety, following streams downhill until she was found by loggers who helped her to safety.

On January 26 1972, Vesna Vulović, a member of the cabin crew of a Jet Airways DC-9 that broke apart after a bomb exploded in the baggage hold over Czechoslovakia, survived a 10,000m fall in the tail section of the destroyed aircraft.

Vulović, whose injuries included two broken legs, a fractured skull, crushed vertebrae and fractured ribs and pelvis, was the only survivor of 28 people on board.

In WWII, Russian airman Lt-Col Chisov survived falling for 7,000m when he blacked out after jumping from his stricken bomber and failed to open his parachute. Chisov fell onto a snow-covered mountainside and slid into the ravine. Despite suffering a fractured pelvis and spinal injuries, he resumed flying duties three months later.

In March 1944, Nicholas Alkemade, tail gunner in a Royal Air Force Lancaster bomber, jumped from the aircraft after it caught fire during an attack by a German fighter.

With his parachute consumed by the fire and choosing to die by falling rather than burning, Alkemade fell 5,500m into a pine forest, followed by a snow drift. His only injury was a sprained leg.

SAA subsidiary’s staff to be paid after 16 months. For many it’s too late