Gogo falls between walls as she flees her family, is stuck for ...

Gogo falls between walls as she flees her family, is stuck for 14 hours 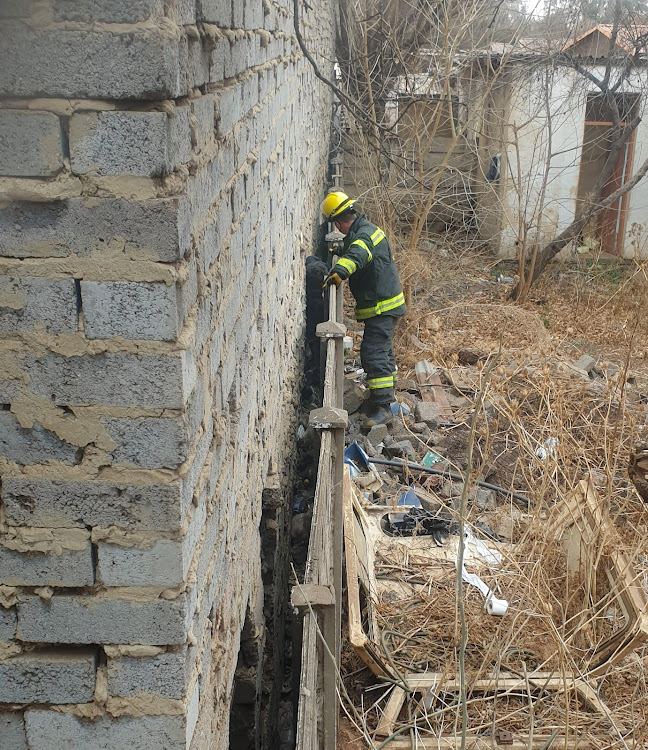 The woman in her 60s was found lying trapped in a small space between a residence and boundary wall on Saturday.
Image: Supplied

A blind Meyerton woman in her 60s was fleeing from her children during an altercation over money when she fell and became trapped overnight in a small space between a residence and boundary wall.

The woman, who was trapped for more than 14 hours, was rescued on Saturday after being stuck from about 6pm on Friday.

It is believed that on Friday her children had asked her for money and when she refused, they threatened to burn her house, said Midvaal Fire Department station officer Nico Gouws

“She then fled and tried to jump the wall to the neighbours but due to her not being able to see, instead of jumping over the wall she managed to jump into the space between the wall and garage of a neighbour, where she then got stuck at about 6pm the previous day until the neighbour then found her the next morning and alerted us,” said Gouws.

A neighbour who called for help, Pastor Dasen Govender, said: “My dog was barking in a very weird way, very late. When we went out we saw nothing because it was quite dark. Early in the morning after about 7am when my niece went out, she saw gogo’s hand stretched out from where she was stuck. I went to the backyard to check. She was literally in the neighbour’s yard stuck in between the wall.”

“I tried to go close to her and tried to grab her hand to pull her up but I saw that she was stuck. My first response was to call the fire department to come and help her. When they came, the only way they could assist her was to break the wall – that’s how tight it was,” said Govender

Gouws, who has been in the fire service for 13 years, said they received a call from the neighbour on Saturday at about 8am.

“He said his neighbour was stuck between a precast wall and brick wall of the neighbouring property and he could not assist in freeing her, so he needs our assistance.”

Gouws said on arrival he consulted with the neighbour. He was informed she was almost completely blind.

“We then jumped over the neighbour’s wall to reach her and to make contact to be able to see how she was doing, and she was fully responsive.” 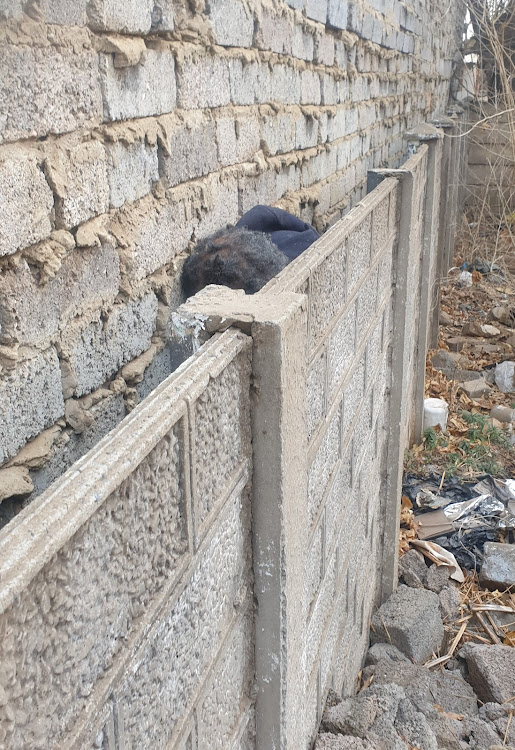 Gouws said it took about two minutes to formulate a plan.

“One crew member of ER24 was assisting the lady while we then started with the rescue. Due to the lady being wedged tightly between the walls, we couldn’t break the wall using a hammer or anything because it would cause further injury.

“We then used the jaws of life, specifically the spreader, to wedge between the garage wall and the precast pillar to push the precast wall away from the lady, and as soon as it was far enough, we could start the slide out the slabs one by one until she was freed.

“She was stretchered away to be assessed. She was classified as moderately injured and sent to Kopanong Hospital for further assessment and treatment due to having slight hyperthermia,” he said.

Govender said he had become acquainted with the neighbour in the two years he had lived in the area.

“There were quite a bit of people that moved in and moved out [of her home since then] – that has been a pattern. But now recently, she has been alone,” he said.

He said he last saw her on Saturday during the rescue.

“While she has been gone, my children and the neighbours close to her have been keeping an eye on her property to see that there is no vandalism or anything, but she hasn’t been back yet. I think she is still in the hospital. I tried to get hold of her family but had no luck at this point.”

Govender said that, as neighbours, they were concerned about her situation.

“We are concerned that if anything happens while we might not be watching, it’s going to be bad. We came together as neighbours to ask what the way forward is to assist her. I believe she comes from the Eastern Cape, so I am trying to get hold of her family so they can try to assist her with something,” he said.

Up in the air: low air quality has spiked in Gauteng this winter

LISTEN | ‘I’m no coward’: Niehaus tells why he’s fighting it out in court