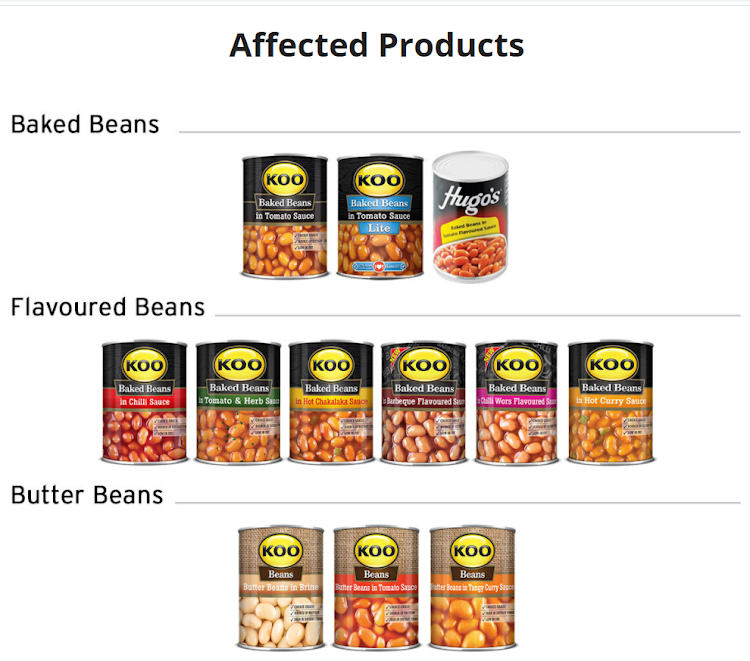 CANNED FROM SHELVES Some of the Koo tinned products affected by a product recall.
Image: koo.co.za

Not a single consumer has complained about a leaking can of Koo canned veggies, but Tiger Brands is recalling some 20 million cans and has quarantined another 36 million – all of which may have to be destroyed.

As tiny as it might be, said Tiger Brands CEO Noel Doyle, any risk that its customers could suffer harm was not acceptable.

He said the magnitude of the recall was on par with the scale of the company’s Enterprise polony recall of 2018.

Consumers won’t have to produce a till slip to be refunded the current price of the canned veg products, given that the recall includes cans produced as far back as May 2019.

Asked whether they were expecting products looted from shops and two Tiger Brands factories earlier this month to be returned in expectation of refunds, Doyle said: “If someone rocks up with a pallet of our products, there will certainly be some questions asked.”

Meanwhile, in a Facebook post on Monday morning, “V Govender” said they’d returned some of the affected cans, bought at the weekend, to a store in Pietermaritzburg, where the products were still on the shelf.

“Store management and Tiger Brands reps were standing around and people were buying the products with the said manufacture dates without anyone telling them otherwise!

“I waited long enough to see my returned items go back on the shelf for sale!”

Tiger Brands said the incident was being investigated.

The company first picked up the problem in May this year, when food residue was detected on the seams of 18 unlabelled cans in its Germiston plant.

They were traced back to three batches of tinned vegetables – among them baked beans, butter beans, sweetcorn, mixed veg in curry sauce, peas and spaghetti in tomato sauce – packaged in cans from one of Tiger Brands’s can suppliers.

The culprit was a defective seal on the can’s seam, resulting in a small leak that created a risk of microbial contamination and what Tiger Brands terms “a low probability of illness and injury if the contaminated product is consumed”.

The can supplier later informed the company of another three affected batches, supplied to Tiger Brands between February and April this year, none of which had yet been sent into the trade.

Those six batches, comprising more than 20 million cans, according to Doyle, were put into quarantine, and the issue was noted in the company’s interim financial report, the company consoling itself that none of those cans had been sent out for sale.

But it didn’t end there.

“As we were sorting those six batches, we found a seventh batch the supplier had not told us about, and in that batch a small number of cans had leakage,” Doyle said. “There were about a million cans in that seventh batch and we knew some had already gone into the trade.”

To establish whether cans that looked perfect in the plant could end up leaking while being transported, Tiger Brands then put about 280,000 cans onto a truck and drove it from Germiston to its Ashton plant in the Cape.

Once there, two of those cans were found to have leaks, which a metallurgist confirmed were linked to the defective seam weld issue.

So the company opted for a complete recall.

And because the can supplier could not give Tiger Brands complete assurance that none of its earlier batches did not have the same problem, the decision was taken to recall all Koo and Hugo’s canned veggies from May 2019 – when the company began supplying the cans for those products – until May this year when the problem was detected and the company stopped using cans from that supplier.

“We still do not have any evidence that any of those leaking cans ended up on a shop shelf for sale, but it is possible,” Doyle said. “And not a single consumer has complained of anything relating to this issue.”

If all the cans have to be destroyed, the total cost of the recall to the company will be between R500m and R650m.

“A small portion of that would be covered by recall insurance, but only the actual cost of staging the recall,” he said.

“It’s quite an unfortunate sequence of events,” Doyle said. “But we had no reason to doubt this supplier, and they have been completely transparent in working with us on this.”

Asked how Tiger Brands would deal with consumers who may claim to have fallen ill from consuming any of the affected products at some point, Doyle said each case would be dealt with on its merits.

“If we see a pattern emerging, we will investigate,” he said.

As for the prospect of destroying those 56 million cans, Doyle said it was not a decision to be taken lightly.

With the cans having a shelf life of between two and three years, Tiger Brands had time to investigate scientific ways to ascertain whether cans were compromised or not, he said.

“We can’t automatically ship them off to an incinerator; we need to make sure we are not unnecessarily wasting food.”

Doyle declined to name the can supplier, but Sunday Times Daily sourced its name and reached out to it to ask whether it supplies the can in question to any other food suppliers.

No response had been received at the time of writing.

“Therefore, the commission will only rest when all these products are removed from the market and consumers get their refunds. Our inspectors are monitoring the recall based on the recall guidelines.”

The riots taught us harsh lessons. Let’s make sure we learn them