LISTEN | We would die to save them, say taxi drivers who ...

LISTEN | We would die to save them, say taxi drivers who defended fun fair

As gunfights raged between looters and taxi operators in Vosloorus, terrified staff cowered in a ride 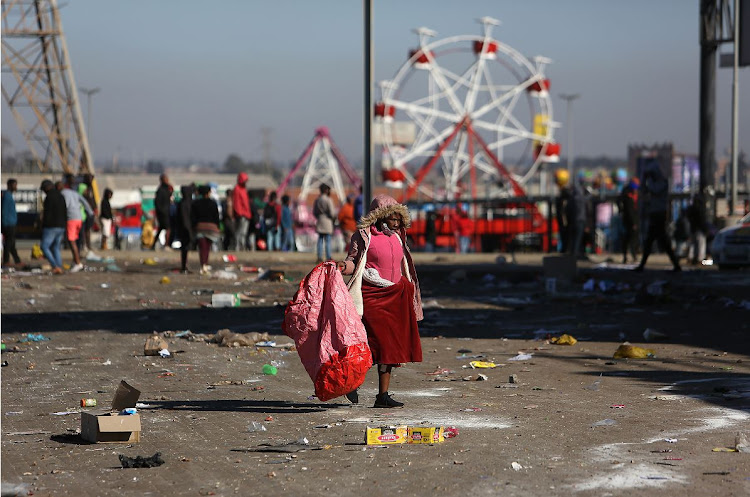 RIDE AWAY A woman makes her way through the grounds of Chris Hani Crossing Mall in Vosloorus. In the background, members of the Katlehong People's Taxi Association stand guard at Tommy's World Fair.
Image: Alon Skuy/Sunday Times

With heavily armed gangs of marauding looters swarming across Vosloorus on Gauteng’s East Rand, destroying shopping malls and vandalising whatever they could not steal, a group of taxi drivers refused point blank to allow the protesters to destroy one thing — the travelling fun park in the community.

Shortly before President Cyril Ramaphosa announced the revival of lockdown level 4, the travelling fun fair, which has been in business for 60 years, had set up operations at the Chris Hani Crossing Mall.

“We were an instant success. We had kids and their parents streaming to us over weekends to go on the rides. It was amazing to see all the joy on people’s faces, especially in these very difficult times,” said the fun fair manager, Louise Horn.

But the joy ended on Sunday when hundreds of people began massing outside the mall, heeding social media calls to loot shopping centres.

Horn said police were deployed to the mall, but not for long.

“We had no idea what was going on. At 4pm on Sunday the mall and streets were empty. The mall was shut early. It was like a ghost town, except for the few police officers.

“We could see people gathering on the nearby ridge watching us, but none of us knew what was going on. We watched the people as they watched us. It was surreal.” 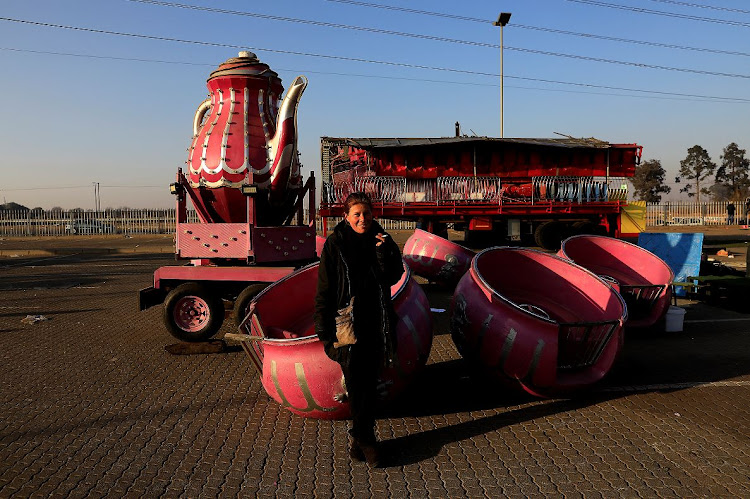 GRATEFUL Louise Horn, manager of Tommy's World Fair, takes a break next to some of the fair's dismantled rides.
Image: Alon Skuy/Sunday Times

She said the 14 staff, whom she described as a close-knit family, immediately began making preparations.

“We packed our few belongings, not really knowing what else to do.”

Horn said on Monday morning they woke to hundreds of people gathering outside the mall’s perimeter fence.

“Throughout the day there was this uneasy tension. That night at 10pm things really went wild. People were streaming into the mall’s parking lot, climbing over fences and breaking down palisades

“The police were here trying to scare them off, but they kept on coming over the fence. It was like a wall of people, which just got bigger and bigger. Then suddenly, out of nowhere, the taxi drivers appeared and, with our amazing security guard, Peace Tsotetsi, began taking control.” 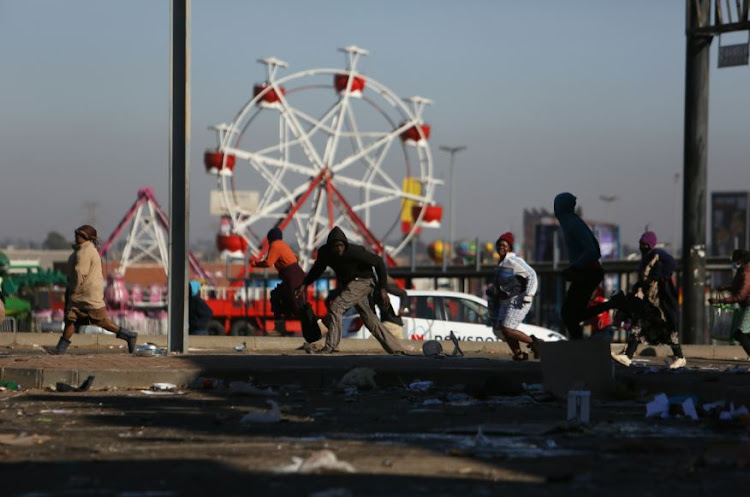 She said when the crowds dispersed they thought it was over.

“Our nightmare had just begun. We were trapped for two days. We couldn’t move. Tuesday and Wednesday nights were the worst.

“When we woke on Tuesday morning the taxi drivers were again there. They told us not to worry, that we will be safe, that they will protect us. When the looters returned all 14 of us staff hid inside one of the big rides, called the Rotor.

“It was terrifying. We could hear gunshots going off outside. Through small gaps we could see taxi guys shooting over the heads of the looters, scaring them off as they approached.

“Some of the looters got into our perimeter fence and set a caravan alight. We thought we were going to die, that we would be set alight, but the drivers chased them off. It was amazing to see these guys [taxi drivers]. It was as though they were one man. They literally surrounded the entire fun fair and protected us.”

She said for three days the taxi drivers held off the looters, telling them the fair was for their children.

“You could hear them screaming at the looters telling them not to attack. That we are there for them and do no harm, and that there was nothing to steal from us. They eventually listened. 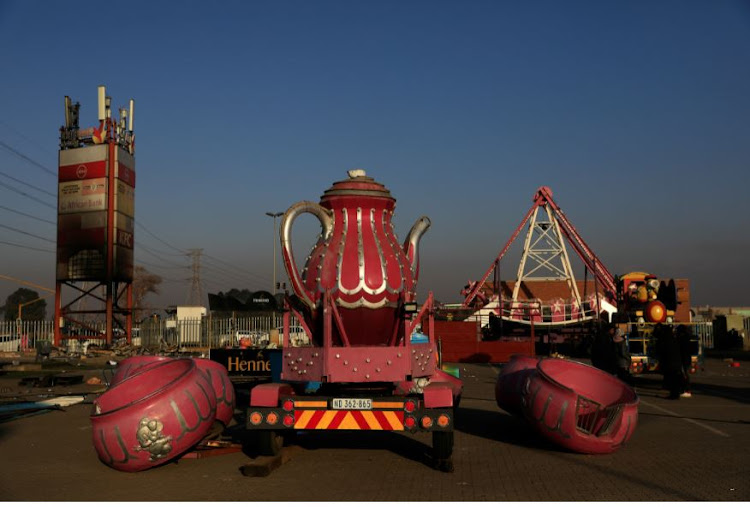 PACKING UP Giant tea cups from one of the rides at Tommy's World Fair lie dismantled as staff begin packing up after four days of deadly protests in Vosloorus.
Image: Alon Skuy/Sunday Times

“It was unbelievable. Never did I think a taxi driver would protect me. No words can describe the feeling of seeing these drivers, with guns, standing like a solid wall around us. I have never been so grateful for taxi drivers like I have over the past few days.”

Horn said they were packing up “until the craziness has stopped”.

“We have found a farm which we will be based at for a while. We travel to malls across the country, usually for a month at a time, and we will, when things return to normal, be back to do what we do best, which is entertain kids and families.” 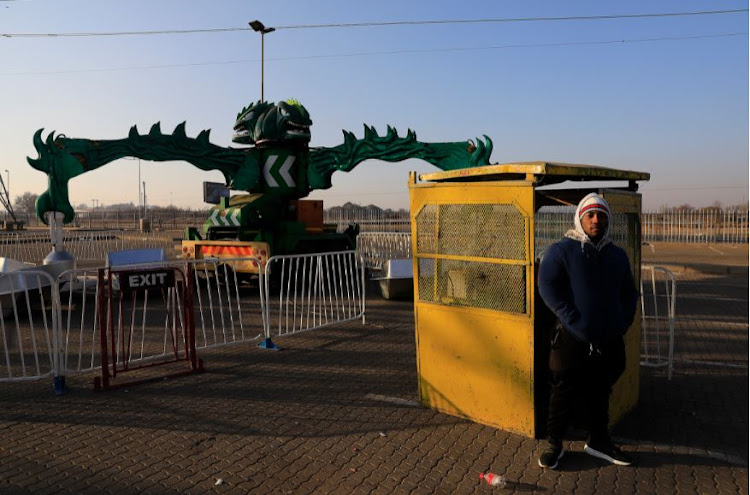 I HAD TO BE BRAVE Security guard Peace Tsotetsi poses for a photograph next to one of the rides at Tommy's World Fair.
Image: Alon Skuy/Sunday Times

Tsotetsi said he had never experienced such a situation before.

“I just knew I had to be brave to protect the people who are my family. When the taxi drivers came I knew we would be OK. It was scary, but together we were able to fight off these looters.

“Every day they came back, but every day we chased them off. Today it is quiet, so it gives us the time to pack up and get to safety.”

Skitla Ranape, a member of the taxi association, said there was no way they would have allowed the fun park to be destroyed.

“This is the one place our children find happiness. I am so angry that they are leaving, that these thugs, whose children came to play here, have chased them off.

“When we heard the looters were coming we came en masse to protect the circus and the rides and their staff. These circus people have done no harm to anyone and we were not going to let these people hurt them. If needs be we would have died protecting them.”

WATCH | Give them some slip: ‘They saved the whole shop with cooking oil!’

This country needs to take a long, hard look in the mirror