Will Zuma go to jail? ConCourt set to hand down judgment

Will Zuma go to jail? ConCourt set to hand down judgment 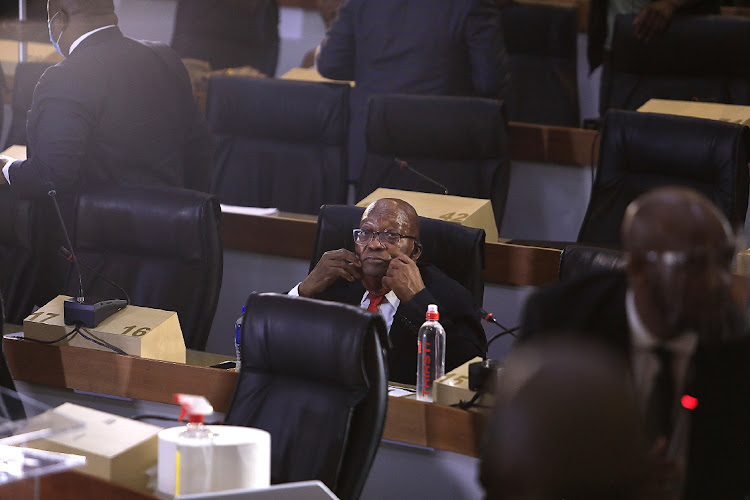 CHEEKY After being summonsed to appear before the state capture inquiry, former president Jacob Zuma refused. Then he chose not to address the ConCourt on what an appropriate penalty would be should it find him in contempt for failing to do so.
Image: Alon Skuy

The Constitutional Court will hand down judgment on Tuesday on whether former president Jacob Zuma is in contempt of court, with the state capture commission having asked that he be sentenced to prison for two years.

This comes as the Pretoria high court has given the commission a further three months to complete its work.

An order from judge Selby Baqwa on Monday said the commission will now be required to wind up before September 30.

It has been three months since the Constitutional Court heard the unopposed application by the commission that the former president be held in contempt of court for failing to comply with its earlier order in February to obey the commission’s summons to appear and give evidence.

When Zuma was summonsed to do so, he did not. He also didn’t participate in either of the court cases brought by the commission to the ConCourt. Instead he released public statements that attacked the commission and the integrity of “some judges”.

Even when the highest court issued directions asking him to address it on what would be an appropriate penalty should it find he was in contempt, he chose not to.

Instead he wrote to chief justice Mogoeng Mogoeng saying he would not participate as a conscientious objection and that the directions were “nothing but a stratagem to clothe [the Constitutional Court’s] decision with some legitimacy”.

The former president’s public statements, made after the commission’s application to the Constitutional Court and after its judgment, aggravated the contempt of defying the court’s order.

Counsel for the commission Tembeka Ngcukaitobi

The commission has argued that Zuma’s incarceration was the only order that would vindicate the authority of the highest court. It asked for two years’ imprisonment.

During the hearing, counsel for the commission Tembeka Ngcukaitobi said there were “strong reasons” Zuma should be imprisoned. His conduct “threatens the entire constitutional order” and must be seen for what it is: “a cynical manoeuvre to avoid accountability”.

If the court were to make a suspended order, there was a risk of a “spectacle”, where Zuma could continue to “run rings around the commission” and it would descend into a circus, he said.

However, Monday’s extension order by the high court would make it possible for the ConCourt to fashion a contempt order that could compel Zuma to appear.

The state capture commission was originally supposed to finish its work within 180 days. This was then extended for two years. The commission then had to go to court for a further extension in February last year, which was supposed to be a “final” one. Then, in February this year, it had to obtain another one for three months, despite working “round the clock”, including evening sessions.

This time, commission chairperson deputy chief justice Raymond Zondo said the extension was necessary for the commission to complete its work responsibly.

Friends with benefits? Kodwa says benefactor ‘has no power over me’

I’m up to the job, just give me a chance, says acting health minister